Deadly pileup due to snow

A HORRENDOUS pileup on the D1 freeway between Bratislava and Trnava on December 29 claimed four lives and left 28 people injured, 11 of them seriously. 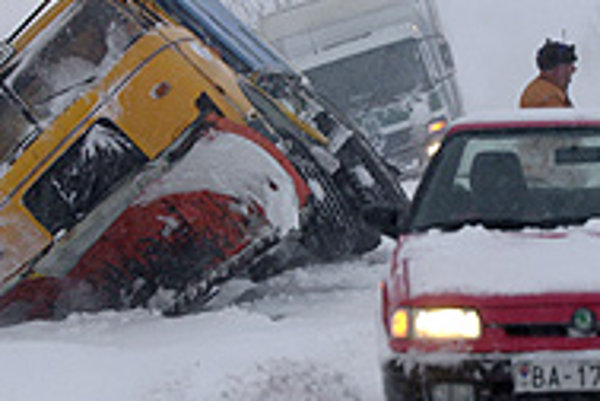 Font size:A-|A+  Comments disabled
A HORRENDOUS pileup on the D1 freeway between Bratislava and Trnava on December 29 claimed four lives and left 28 people injured, 11 of them seriously.

The 10:00 a.m. crash occurred in a blizzard that began in the early morning hours and left roads in Western and Central Slovakia choked with snow. Visibility was at times almost nil, and the 90-kilometre wind gusts rendered the work of snowploughs futile.

Despite the terrible weather conditions, the route was heavily travelled by people on their way to cottage country in Slovakia's north to celebrate New Year's Eve.

While police had still not identified the culprit by print time, the accident was believed to have first involved three cars, and then a tanker truck, which struck them from behind.

When it was finally over, a total of 72 cars, trucks and buses had been involved on both sides of the freeway, making it the largest road accident in the region in memory, according to Ján Kovalčík, head of the Bratislava Emergency and Transport Service.

On the scene by 14:00, The Slovak Spectator interviewed firemen, ambulance personnel and rescue workers, some of whom seemed close to tears.

"There's no doubt that speed was the cause," one fireman said, shielding his eyes from the driving snow. "People didn't respect the condition of the road surface."

While northbound traffic in the slow lane that morning had reached a maximum of 60 kilometres per hour, fast-lane traffic was moving considerably quicker, including trucks and buses using their weight to pound through the drifts.

Asked how many people had been hurt, the fireman pointed at a Peugeot crushed beneath the wheels of the tanker. "There're three in there alone," he said, adding that despite the 16 ambulances that had already arrived from Bratislava alone, some injured people still remained in their damaged vehicles, waiting to be taken out.

The three who died in the Peugeot were later identified as a 44-year-old woman, her 24-year-old son and his 18-year-old girlfriend. The husband and father, 48, was injured and remains in hospital.

A body lay beneath a reflector sheet between two blue milk cartons placed there to mark the spot in the blizzard. It was that of a 62-year-old woman from Levice who had been a passenger in an ambulance involved in the crash. The ambulance driver and two other patients he was carrying were also seriously hurt.

Children's toys and broken sleds were visible in some wrecked cars, in shocking contrast to the windowless hulks of overturned trucks that rested beside or on top of them.

Despite the obvious severity of the crash, some drivers caught in the traffic jam in both directions tried to escape the standstill by driving along the shoulder of the road, further complicating the passage of ambulance and rescue vehicles. The fire engines and heavy machinery called in to lift trucks off cars finally had to travel down the opposite side of the freeway.

Bratislava police spokesperson Silvia Miháliková, describing the scene for Radio Twist, criticized what she called a "lack of discipline" on the part of drivers.

The D1 remained closed until the following morning, while the 1,500 police and 1,000 firemen called into service on Friday by Interior Minister Vladimír Palko worked to deal with the consequences of the storm around western Slovakia.

Trains ran up to four hours late, and the Bratislava airport was closed for four hours to both departures and arrivals. Border crossings were closed to cars without snow tyres.