IN THE TRADITIONAL New Year's address by Slovakia's head of state, President Ivan Gašparovič highlighted what he termed a "decline in morality" in Slovak politics and the negative impact of the current cabinet's reforms, and appealed to those in power to mitigate the effects of the ongoing changes on Slovak society. 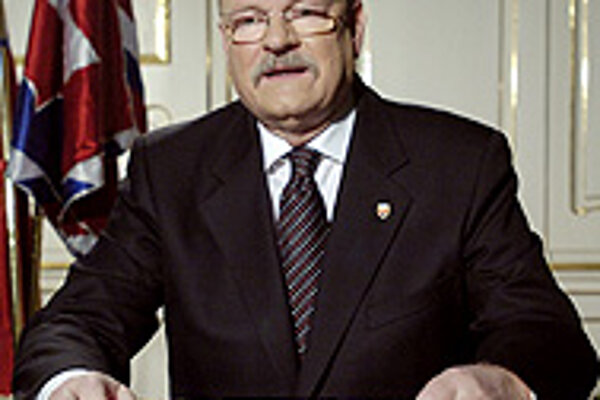 Font size:A-|A+  Comments disabled
IN THE TRADITIONAL New Year's address by Slovakia's head of state, President Ivan Gašparovič highlighted what he termed a "decline in morality" in Slovak politics and the negative impact of the current cabinet's reforms, and appealed to those in power to mitigate the effects of the ongoing changes on Slovak society.

"Many citizens are in financial distress, in a serious social situation. It is difficult for these people to be content and happy," Gašparovič said in the 20-minute televised address on January 1.

"I call on political parties... to pay sufficient attention to the citizens and their problems."

The speech was critical of the economic situation in Slovakia, for which the president blamed the right-wing ruling coalition. The country remains plagued by disparities between wealthy urban centres like Bratislava and poorer outlying regions. Per-capita GDP is still around 50 percent of the European Union's older members, although it is rising rapidly.

In the aftermath of the speech, Gašparovič, a former member of the opposition HZDS party, was criticized for allowing political and populist overtones to mar what is meant to be an act of statesmanship, as well as for a perceived lack of clarity.

Darina Malová, a political scientist at Comenius University in Bratislava, described the address as "unclear and a bit confusing".

"The message of the New Year's address got lost somewhere. It was unclear what the president was recommending to the people for the New Year. On one hand he said the [cabinet's] reforms had a negative impact on people and needed to be corrected, and on the other he said they were necessary," she told The Slovak Spectator on January 2.

Gašparovič drew attention to the parliamentary elections scheduled for September 2006 and the countrywide municipal elections slated for the end of the year - events, he said, that "will shape Slovak politics for the next four years".

The president urged politicians and "everyone involved in the preparation of the elections" to pay greater attention to poverty, living standards and people's daily problems if the country hoped to avoid the under-20 percent turnout seen in recent elections to Slovakia's regional parliaments.

"This [regional turnout] was a clear testimony to the failure of politicians and politics as such," Gašparovič said.

The president reserved a significant part of his address for criticism of the Mikuláš Dzurinda government's economic reforms.

The reforms were launched soon after the government took power in 2002, and sought to put the failing health care and pension systems on more sustainable footing by asking people to shoulder a portion of the costs, and to take more responsibility for their retirement.

"I think the reforms of the health care and pension systems complicated people's situations," Gašparovič said.

"Surely, most of us agree that the reforms had to be carried out, but if they already need repairing today - and their authors admit that some steps were ill-considered and need fine-tuning - then it's obvious that some parts of the reforms were not prepared well or considerately, nor were they well timed or harmonized."

A recent poll carried out by the Institute for Public Affairs think tank showed that most people agree with the ongoing reforms, even many of those who described themselves as opposition party supporters.

Gašparovič, however, stressed the hardships caused by the reforms, such as "growing poverty and harder conditions for some social groups", and called on the cabinet to "dedicate more time to solidarity between the rich and the poor, as well as to regional disparities".

On the political level, the president said the country had seen a turbulent year, and blamed politicians for failing to establish a higher-minded political culture in Slovakia.

"On the contrary, it seems that morality in politics has fallen even further. The closer we get to parliamentary elections, the worse it becomes," Gašparovič said.

He noted that there are many independent MPs in parliament who "do not represent anybody and are not accountable to anyone", and yet who vote on laws that affect millions of people, leaving them open to suspicions that their votes are for sale.

"This is a serious problem that will have to be solved by changes to the Constitution," Gašparovič said.

While the address was largely critical of the government, it also spared praise for Slovakia's improving image abroad and the successes the country enjoyed last year, in particular its election to the UN Security Council.

"We are considered a reliable and responsible partner abroad," Gašparovič said.

"Slovakia has become a non-permanent member of the UN's Security Council, the most important decision-making body of the international community. Slovakia will become an important player in international policy, where it will defend the interests of Central and Eastern European states as well as the EU."