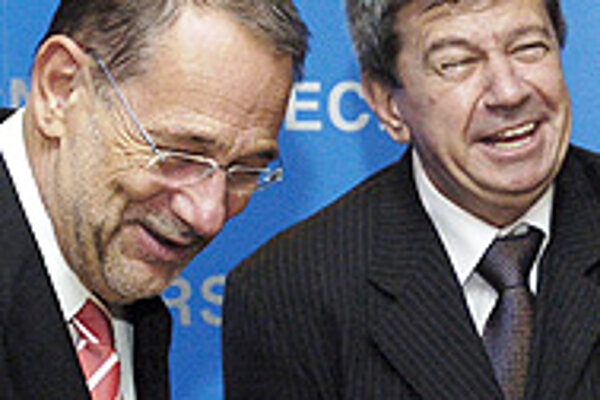 For starters, Slovakia dedicated more time to regional cooperation in the new conditions created by its 2004 EU and NATO membership. Slovakia was arguably the most active promoter of cooperation within the Visegrad Four group including Hungary, Poland, and the Czech Republic.

Together with the Netherlands it also initiated the organization of a Review Conference within the Organization for Security and Cooperation in Europe (OSCE).

In 2005 Slovakia, as a member of the EU, increased its activities towards developing countries, providing development aid for a variety of countries - Afghanistan, Albania, Bosnia and Herzegovina, Kazakhstan, Kenya, Kyrgyzstan, Macedonia, Mongolia, Mozambique, Sudan, Tajikystan, and Uzbekistan - from the National Programme of Official Development Aid. These countries thus became states of interest for Slovakia's foreign policy.

Ukraine became a priority of Slovak foreign policy, receiving Slovakia's integration knowhow and support for its integration ambitions to the EU and NATO.

The same was also true of Croatia. Before the EU decided to open accession talks with Croatia, Slovakia bucked mainstream international opinion and, together with Hungary, Austria, and Slovenia, supported Croatia's bid for EU membership.

Slovakia activities towards the developing states of Serbia, Montenegro and Ukraine corresponded with its announced priorities for its term on the UN Security Council. Slovakia's acceptance as a non-permanent member of the council as of January 1, 2006 was perhaps the greatest success of Slovakia's foreign policy in 2005.

Apart from Ukraine, Slovakia will also focus its attention in this institution on Central Asia and the West Balkans. According to available information it also wants to deal with the issue of Cyprus in the UN Security Council.

After Slovakia's entry to the EU in 2004, a parliamentary vote on ratification of the draft European Constitutional Treaty took place in 2005. Slovakia ratified the draft with a comfortable, more than two-thirds majority, with only the ruling coalition Christian Democratic Movement and the opposition Slovak Communist Party MPs voting against it.

Slovakia will probably retain these foreign policy priorities in 2006 as well. It will likely consider it a priority to mediate between Russia and Ukraine, as well as to participate in a discussion on the final status in Kosovo. Priorities will also likely remain the same within development assistance.

Ivo Samson is a senior researcher with the Research Center of the Slovak Foreign Policy Association.