A grand return for the King

AFTER the Lord of the Rings behemoth had finally been put to rest, the prospect of Peter Jackson next making King Kong was not exactly what many of the director's longtime fans had hoped for. Not to detract from his achievement in adapting JRR Tolkien's epic trilogy, but fantasy can be used to illuminate far more than wizards, elves, and giant apes. 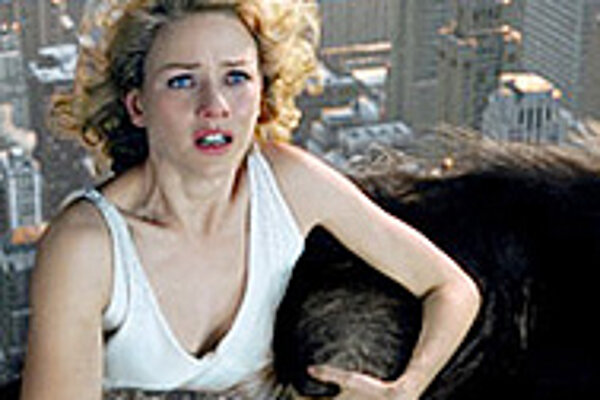 AFTER the Lord of the Rings behemoth had finally been put to rest, the prospect of Peter Jackson next making King Kong was not exactly what many of the director's longtime fans had hoped for. Not to detract from his achievement in adapting JRR Tolkien's epic trilogy, but fantasy can be used to illuminate far more than wizards, elves, and giant apes.

Anyone who doubts need look no further than Jackson's stunning 1995 film Heavenly Creatures, which not only introduced the world to Kate Winslet, but also used fantastical imagery to depict one of the most devastating love stories in this, or any, era. Furthermore, do we really need another bloated Hollywood remake?

The answer, apparently, was "yes." Jackson's re-imagining of the epic love story between the great gorilla and the willowy waif may not be perfect - it's too long and it suffers from some weak effects sequences and some distracting camerawork - but, like the Lord of the Rings trilogy, it proves that computer generated images and effective drama aren't mutually exclusive.

The most impressive thing about King Kong is not how great it looks (although, with a couple of exceptions, it does), but how utterly heartbreaking it is. As the beautiful actress turned damsel in distress Ann Darrow, Naomi Watts spends most of the film alternating between high-pitched shrieks and doe-eyed gazes, but she leaps into them with the same intensity she brings to all her roles. She and Jackson not only make the burgeoning love between the beauty and the beast believable; they fully earn its inevitable tragic ending.

But King Kong is ultimately about spectacle. Jackson again shows his talent for staging huge effects-driven sequences against stunning natural landscapes without compromising either. Nor does he compromise his commitment to gore: As if to appease those still yearning for him to return to early splatter films like Dead Alive, Jackson inserts a brutal, and extensive, gross-out scene involving giant deadly insects that would make even an entomologist cringe.

Large-scale scenes of Kong battling foes both human and animal take full advantage of the latest in computer effects - and are equaled in movies perhaps only by the battle scenes in the Lord of the Rings. What's every bit as impressive - and quite surprising - is the emotional range displayed by the great ape. His sophisticated and nuanced facial expressions move from rage, to wonder, to glee, to melancholy, frequently within the same scene.

The best example of this comes in one of the film's most unexpected and irresistible scenes, in which Ann entertains Kong with a comedy-and-dance routine. Jackson and his team of animators show the gorilla nearly ecstatic with joy; in addition to giving the movie its most comically cute sequence, this scene provides Kong with yet another level of humanity, thus making his downfall even more tragic.

Jackson's remake stays mostly faithful to the original's storyline. A film crew led by director Carl Denham (Jack Black) happens upon a forgotten island populated by hostile natives and a giant gorilla, who immediately falls in love with the crew's beautiful actress. When Denham captures Kong and puts him on Broadway, the angry gorilla escapes and roams the streets of New York in search of his beloved.

In Black, Jackson finds a worthy comic foil - the mad movie man whose dangerous devotion to the grandiose threatens to destroy him and all those around him. Though we sympathize with him, we hold our breath not for him, but for his prey: We know the Empire State building stands between Kong and his beloved, but we can't help but hope, if just for a moment, for the impossible.