THIS YEAR'S New Year's celebration was one of the most peaceful and best received in history. Despite several incidents, emergency personnel around the country had a relatively calm night and the crowd in the capital was thrilled with the atmosphere. 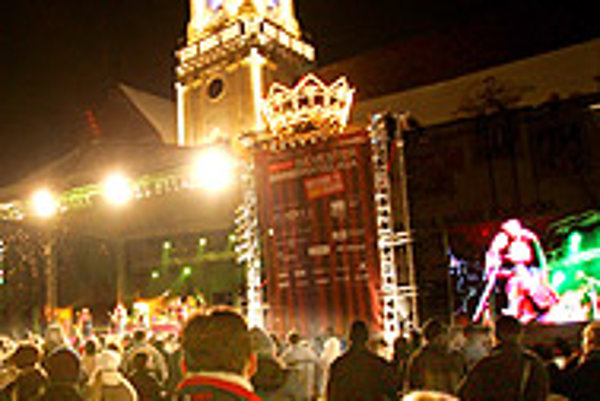 Font size:A-|A+  Comments disabled
THIS YEAR'S New Year's celebration was one of the most peaceful and best received in history. Despite several incidents, emergency personnel around the country had a relatively calm night and the crowd in the capital was thrilled with the atmosphere.

According to police, the snow storm that hit the south-western regions forced many people to stay home, possibly contributing to the night's peacefulness.

"The change in weather could be the reason for low attendance at some cultural events, which, consequently, resulted in fewer injuries," Vladimír Gemela from the Police Presidium said.

Around 40,000 people - a third of which were foreigners - enjoyed a rich Silvester programme in Bratislava's historical centre, and everyone agreed it was one of the best parties in the city's history.

"And also one of the most peaceful," said Milan Vajda, a spokesperson for Bratislava's mayor. "Literally, nothing serious happened. That's a great accomplishment."

Shortly before midnight, the crowd moved to the Danube's embankment, where it was treated to a thundering drum concert, accompanied by light and pyrotechnic effects. Hundreds of illuminated balloons were released during the countdown, which was followed by a highly impressive fireworks display.

The organisers plan to keep the countdown, which used to be at the Main Square, at the river in the future. "The Danube's embankment is definitely Bratislava's soul," Vajda said.

Next year's celebrations should see changes at Hviezdoslavovo námestie. Organisers would like to put a DJ on the balcony of the Slovak National Theatre, in the belief it will better reach the audience from up there.

Evil did not sleep

Although police and fire reports indicate the most peaceful Silvester celebration in years, the night did not pass without tragedies.

Four people died in the country's east. Noise from the local fireworks show probably drowned out sounds of an arriving train, causing it to run over an 11-year-old girl. Three young men were killed in a car crash.

Doctors had to attend to dozens of injuries, mostly caused by alcohol intoxication, fights and falls, as well as careless usage of pyrotechnics. Trenčín's surgery department reported a 40-year-old man with injuries from a firework.

Based on regional reports of the SITA news wire, Žilina observed only one small disturbance during the fireworks, when four drunk youngsters called names at foreigners. Banská Bystrica's firemen were called out twice: first to a family house in Lučenec, where the owner managed to put out the fire before the fire brigade

even arrived, and to a broken radiator in a Zvolen pub.

Policemen overseeing the arrival of the New Year in Nitra and Trnava were surprised by the unusually quiet celebrations. Nitra did not report any single act of disobedience and Trnava registered only a few minor problems, such as an inebriated celebrant lying in the snow.

Prešov's highlight during the celebrations was its popular new winter decoration: an illuminated blue snowman erected near the St Nicholas Church. Unfortunately, the snowman did not have very peaceful holidays. On one day, his power was cut off. Then, somebody tried to steal his broom. The snowman's worst encounter, though, was with a young Czech, who, energized by alcohol, beat the decoration violently for quite some time. Luckily, the snowman withstood the assault, but the young man ended up short of Sk1,000 (€26).

Bratislava officials
are extremely satisfied
with 2006 New Year's
celebrations that produced
thrilled visitors and
no poblems or injuries.