PARLIAMENTARY elections are still nine months away, but Slovak political parties are already talking about possible coalition partners in the country's next government. 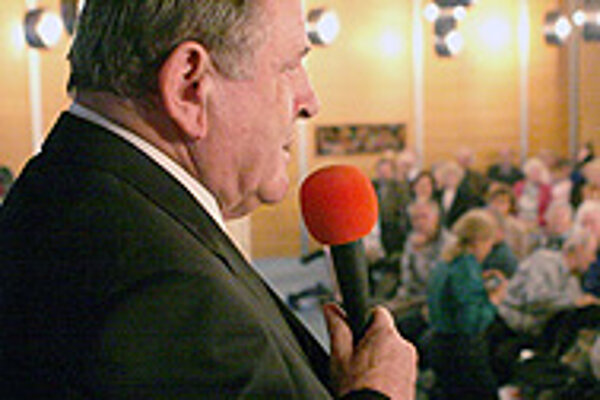 While the three parties of the current ruling coalition have suggested they would like to continue together following the scheduled September general elections, unless their voter support takes a sizeable jump they are unlikely to be in a position to form a majority government.

Given the relative weakness of the current ruling bloc, speculation is growing over whether the current frontrunner, the opposition Smer, or the second place Movement for a Democratic Slovakia (HZDS) could join forces with the incumbents, or whether Slovakia will gain a completely new ruling coalition after eight years of Mikuláš Dzurinda.

According to Grigorij Mesežnikov, president of the Institute for Public Affairs, a Bratislava think tank, post-election developments may follow one of three likely scenarios.

The first possible outcome, according to the political analyst, is "the continuation of current reforms under a centre-right coalition" that might include a current opposition party, the Free Forum (SF), which was founded in 2003 by a group of defectors from PM Dzurinda's Slovak Democratic and Christian Union (SDKÚ) party.

Another option is "a major revision of reforms under the lead of [the social-democratic] Smer with the open or silent support of the Slovak Communist Party and the Slovak National Party, and possibly also the HZDS," Mesežnikov continued.

"The last possibility is a power-sharing agreement between the left and the right resulting in a compromise that prevents the continuation of the current reforms, but also saves them from being scrapped."

There is widespread agreement among political observers that the country is unlikely to see another politically homogenous government like the current right-wing Dzurinda administration. A mixed government is seen as the most probable outcome, with the balance of power depending on the election results of individual parties.

Slovak President Ivan Gašparovič recently told the Expres radio station that he was "convinced that Smer will be the winner of the [2006] general elections".

Smer supported Gašparovič in his campaign for the presidency in 2004.

The party regularly scores around 30 percent in voter opinion polls, roughly three times that of its nearest rival. It is questionable, however, whether the support Smer currently enjoys will translate into an equally strong election result. Nor is it clear whom Smer might choose as a coalition partner if it won the elections.

An alliance between Smer and the HZDS, which under leader Vladimír Mečiar ruled Slovakia for much of the 1990s, is not as unlikely as it earlier seemed.

Following a two-month sojourn away from public life, Mečiar gave an interview to TV Markíza on January 8 in which he said he could imagine forming a government with Fico despite the conflicts the two opposition leaders have had in the past in their struggle for recognition as the unofficial leader of the Slovak opposition.

However, Mečiar warned that Fico would have to "abandon much of his rhetoric and his goals because many of them are unrealistic".

The three-time former prime minister said that after the most recent parliamentary elections in 2002, which the HZDS won with 19.5 percent, he had wanted to form a government with Fico and even to propose Fico as prime minister.

"In 2002 we could have formed a government but Smer had to say yes. Fico sent me a note saying I should submit a request in writing if I wanted to meet with him, and when I did so he told me through the media that he would not talk to me," Mečiar said.

With the HZDS unable to find a coalition partner, the surprise second-place finisher in the 2002 ballot, Dzurinda's SDKÚ, with its 15 percent was able to cobble together a coalition of similarly right-leaning parties.

Despite his past contretemps with Fico, Mečiar said he could again imagine cooperating with Smer.

But he was unable to avoid needling Fico as a man "who needs microphones and presents himself with strong words that are never followed by deeds. He needs to be alone, to have submissive people rather than partners."

On the other hand, Mečiar said he could not imagine working with Dzurinda because the two men had "absolutely different" work styles.

Despite his prognoses, Mečiar may not be in a position to choose coalition partners come September. Having led his HZDS from its founding in 1991, he has seen support for his party slump to around 10 percent recently from the over 30 percent it enjoyed during its heyday in the 1990s.

The decline of the HZDS began with the 1998 elections, which it won by a narrow margin. The party did not manage to find a cabinet partner, and a broad coalition of forces under Dzurinda emerged to command a two-thirds majority in the 150-seat parliament.

Now in opposition for almost eight years, the HZDS is in dire need of an avenue back to power.

The priority of the current ruling parties remains to complete their current term and to find a way to continue as a centre-right coalition after the next elections. With their combined voter support at around 30 percent, however, they will need another coalition partner to form a majority government.

Mečiar's HZDS has been seen as a possible partner over the past 18 months, given several instances of cooperation between the HZDS and the government in parliament, and given the heat of invective between the SDKÚ and Smer.

Paradoxically, it was the parties of the current government that in 1998 used an anti-Mečiar platform to wrest power from the former PM.

Mečiar took Slovakia into virtual international isolation with his authoritarian leadership from 1994 to 1998, and his governments were also blamed for pushing the country's economy to the verge of collapse.

While senior SDKÚ officials have been equivocal about the possibility of working with the HZDS, the Christian Democrats have said they will not cooperate with Mečiar, as have the majority of Hungarian Coalition Party (SMK) officials.

"If the three-party coalition wins more than 35 percent in elections, it will be in a position to dictate subsequent political developments", he said.

This is unlikely to happen, especially given the ambition of the Christian Democrats to be crowned leader of the right wing in Slovakia in place of Dzurinda's SDKÚ.

With both parties commanding electoral support of around 8 to 10 percent, the title remains to be claimed.

The SMK has no such ambitions, as its voters identify less with right-wing policies than the supporters of the rest of the coalition.

Regardless of whether right- or left-wing parties carry the next elections, Slovak voters seem to be in the mood for more centrist policies.

According to a recent poll by the MVK agency, 39.5 percent of respondents said they hoped the next government would be mixed rather than solid red or blue.

Interestingly, even right-wing supporters wished for a mixed government. According to the poll, 44 percent of SMK and Christian Democrat voters called for a heterogeneous cabinet, while 32 percent of SDKÚ voters favoured a mixed slate.

Even 48 percent of Smer voters said they would support a mixed government.

According to Soňa Szomolányi, head of the political science department at Comenius University in Bratislava, the poll suggests that "people are tired of political conflicts and confrontations".

"In Germany, for example, the grand coalition [of Angela Merkel's Christian Democrats and Gerhard Schröder's Social Democrats] supports this idea of a de-politicized democracy," Szomolányi told The Slovak Spectator.

"In Slovakia we are also likely to see such a combination after the next elections. Slovakia needs less confrontation in politics, and at the same time a continuation of the current positive trends."