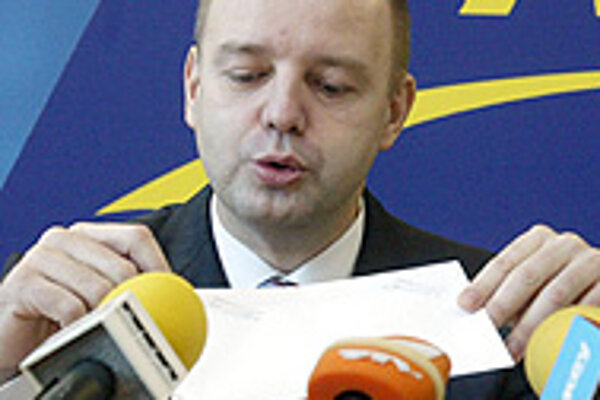 Rusko told a press conference that Penta had a major influence on several government ministries, including those of health, economy, and transport. He said the charges were proven by Penta's asset acquisitions under the current government.

Now describing itself as a private equity group, Penta was established as a small Bratislava brokerage in 1994. Using a strategy similar to corporate raiders in Western economies, it played a role in bank and insurance sector privatizations, and later went on to debt recovery, corporate takeovers and restructuring.

The company claims to have consolidated assets worth €600 million, and to be capable of competing with international private equity funds operating in Central and Eastern Europe on deals worth up to €500 million.

According to Rusko, Penta wields major influence over the parliamentary caucus led by former ANO MP Ľubomír Lintner, which after ANO's departure from the cabinet remained with the coalition and continued to support the current government.

Rusko claimed that Penta had hijacked the reform of Slovakia's health care system, and that while he had previously supported the changes to increase the burden of financing on patients, "the original motto of 'all for the patients' has been replaced by 'all for Penta'."

Penta owns the Dôvera and Sidéria health insurance companies, along with 36 pharmacies. Following an agreement with municipal authorities it is also set to administer hospitals in the east Slovak towns of Humenné and Svidník.

According to Rusko, "[Penta's] hospitals, distribution companies, pharmacies as well as [their] recent acquisition of almost 40 rescue stations is the result of the financial group's influence in this sector."

Other financial groups in Slovakia have also shown interest in the health care sector.

At the end of 2005 the Pravda daily wrote that the J&T and Slavia Capital financial groups were also getting involved in health care. J&T, for instance, has acquired a licence to operate a health insurance company.

"The ministry will not comment on Mr Rusko's statements. There's nothing to say," Health Ministry spokesman Karol Farkašovský told The Slovak Spectator.

Penta also denied the allegations made by Rusko and said it was going to seek legal advice to protect its reputation.

"We see no reason whatsoever to comment on the nonsense that Mr Rusko presented at his press conference," said the company in an official statement on January 10.

"Penta does not have and has never had any political ambitions. We view Mr Rusko's statements as a part of pre-election politics. After consulting our legal experts Penta will take the necessary steps to protect its reputation against the attacks made by Mr Rusko," stated Penta.

At his press conference, Rusko also flourished an envelope ostensibly containing the name of the winner of an unspecified future privatization tender. The envelope will be kept by a public notary and will be opened after the privatization in question is decided.

Rusko said the contents of the envelope would prove that privatization tenders in Slovakia are decided by backroom agreements rather than fair competition.

"This is just a demonstration of how Mr Rusko thinks and acts," he told The Slovak Spectator.

According to Beňo, the statements likely reflected how Rusko himself had behaved while he was the economy minister.

Rusko held the post of economy minister in the current cabinet until autumn last year when he was sacked over more than Sk100 million (€2.7 million) in IOUs, a debt he apparently owed to a former businessman active in the energy sector, which fell under his ministry's jurisdiction.

Rusko failed to satisfactorily explain the apparent conflict of interest.

"At least it's obvious now why he went for the ministerial post. He has so far failed to explain his problems with the IOUs, and now he's trying to detract attention," said Beňo.

Following his departure from the cabinet, Rusko's share in TV Markíza, the station he launched in 1995, was also bought out, and he ended the year by shooting himself in the leg in an unexplained hunting accident.

"What's important now is that he recovers from the injuries he caused himself, and when he's fit again, we will also deal seriously with his statements," said Beňo.