AT the end of last year, Sierra Leone's acting Defence Minister Joe Blell received Lieutenant Colonel Miroslav Šoter of the General Staff of the Slovak Army, and military observer Captain Juraj Sepeši. Both officers served within the UNAMSIL (United Nations Mission in Sierra Leone) mission, which operated in this West African country from 1999 to December 2005. 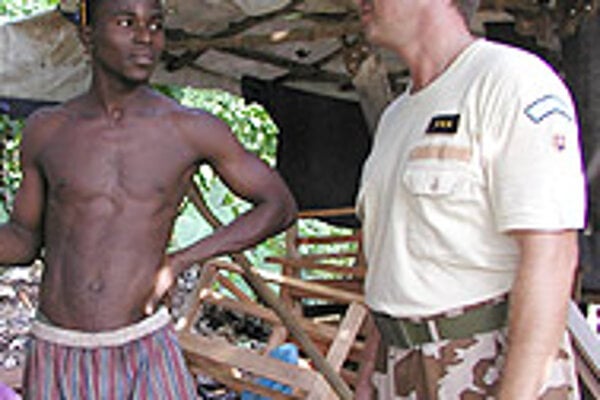 Joe Blell spoke very positively about the operation of UN soldiers, whose number reached almost 18,000 during the mission. UNAMSIL was commissioned to end the conflicts between the government forces and the rebel groups, which are to blame for killing and terrorizing civilians. Over 60,000 civilians died in the conflict. Almost 100,000 people were mutilated when rebels cut their limbs with machetes. Over 400,000 people became refugees and almost 75 percent of girls and young women fell victim to sexual abuse and rape. The UNAMSIL mission lost 160 soldiers before peace was finally installed in 2002.

According to Joe Blell, the Republic of Sierra Leone, which has a population of 5.5 million, is building a professional army in which 10,000 soldiers will serve. The International Military and Training Team (IMATT) under the command of the British and Canadians, is assisting in the process of building an army in this, the poorest country in the world.

The situation in Sierra Leone has been stabilized, though the country is still very economically unstable, despite possessing ore and diamond deposits. In 2004, the country posted a GDP of $200 per capita while literacy does not even reach 40 percent. Average life expectancy is 37 years, and unemployment is more than 60 percent.

Even so, the country does have potential as a tourist destination, thanks to its long, sandy coast and a temperatures of 27-29 Celsius all year round.

At the start of the mission, Slovakia had two military observers. Once the situation in the country had calmed down, this was reduced to just one. Captain Sepeši was the last Slovak observer. After completing his mission he reported back for duty at his home air base in Prešov.

Lieutenant Colonel Šoter served in Sierra Leone for two years and is responsible for observer missions at the General Staff.

The UNAMSIL observers, however, were exposed to considerable security risks and tropical diseases. Their task was to send reports about armed incidents and the security and humanitarian situation in remote places in the country. The observers were located in small groups at these remote places while they had to secure their own housing and food. But the Slovak officers handled their mission well. They were mostly based at the Freetown headquarters.

The Slovak Army will also be represented in Africa in 2006. Two military observers are to operate within an EU mission in Sudan.

In 2006, the number of Slovak soldiers in the KFOR mission in Kosovo is to increase by 35 soldiers. Slovakia will also send the same number of soldiers to the ALTHEA mission in Bosnia and Herzegovina, which is in line with Slovakia's intentions to intensify its efforts to bring stability to the Balkan region.