Social season starts with a flourish

THE SIXTH Opera Ball held at the Slovak National Theatre started the ball season this year in grand style on January 7. 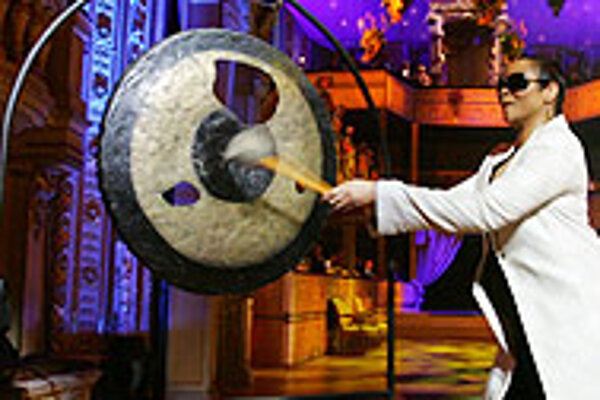 The ball, in one of the most beautiful historical buildings in Bratislava, was an evening full of elegance, glamour, excellent music, dance and fun until the early morning. Almost 600 personalities from political, social and cultural life attended it.

British star and soul diva Gabrielle, for whom this was the first ball in her life, opened the evening with a symbolic stroke of the gong.

The opening ceremony, conducted by choreographer and director of the evening Ján Ďurovčík, was inspired by the theme of chess. Actress Kamila Magálová moderated the evening in the black-and-white dress of a chess queen. Fashion designers confirmed that black and white are the colours of this year's ball season.

"The ball in the Opera SND is a unique event with a special and cordial atmosphere. It pleases me that we have managed to create a tradition of a top event, which contributes also to establishing Bratislava as an important metropolis in this region. Our guests come not only from Slovakia and Europe but also from overseas," said Pavol Lančarič, general director of Orange Slovensko, which supported the evening.

At midnight Gabrielle brought the people to the boil with her hits including Out of Reach. Other performers on the scene were Scottish singer Jimmy Somerville, Slovak opera soloists Miroslav Dvorský and Martin Malachovský, the Slovak National Ballet dancers and Czech musicians Petra Janu, Janek Ledecký and Lenka Filipová.

More than 120 chefs and waiters looked after the visitors. Among the delicacies being served were oysters, grilled small octopuses and roasted quails. Wines came exclusively from Slovak cellars.