Where the blind read their tea

THE AURA teahouse in Bratislava is the right place to relax from the daily rush. Like other teahouses it has a relaxing atmosphere with dimmed lights, a strong smell of herbs and Asian decorations. After a while, though, you begin to notice that the decorations at the entrance are hung somewhat higher than usual 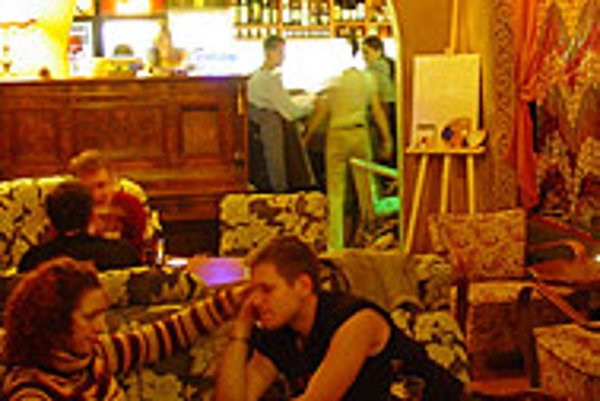 Font size:A-|A+  Comments disabled
THE AURA teahouse in Bratislava is the right place to relax from the daily rush. Like other teahouses it has a relaxing atmosphere with dimmed lights, a strong smell of herbs and Asian decorations. After a while, though, you begin to notice that the decorations at the entrance are hung somewhat higher than usual. But you only get to feel the difference when you see an apparently blank menu in the hands of some of the customers.

Aura is the first blind-friendly teahouse in Slovakia. It has translated part of its menu into Braille for the blind and thought of their comfort during their visit.

Most of the teahouse's customers are Bratislava university students, as it is located inside the student dormitory complex in Mlynská dolina. This involves the blind, who are fully integrated into student life.

The idea to print the menu in Braille came to Aura's owner, Miroslav Drobný, after finishing a project on Internet sites for the blind. Along with Branislav Mamojka, he realized that food and drink menus are usually written in script too small to be readable to partially sighted people and that none of their compilers have ever thought of the blind as such.

Because the entire menu translated into Braille would have been about five times thicker than the regular one, the menu for the blind is shortened. Nevertheless, the portion selected from around 150 teas and coffees found on the regular menu is more than welcomed by blind customers.

"I learnt about the special menu a couple of months ago in an e-mail from my friend. It's a great idea," says Darina, 20, a sightless student at Comenius University. Living in one of the Mlynská dolina's dormitories, she has had an opportunity to visit Aura a couple of times.

"I usually go there with a sighted friend, but going alone wouldn't be a problem either because the personnel there are usually very helpful," she says.

Darina explains that with the menu like this, she does not have to make her mind up in a hurry. Before, she would often order the first thing the waiter suggested as she felt that hesitation in the choice would irritate him/her. "Now, I can peacefully go through the pages and take my time."

Zuzana, a waitress at Aura, has come across only positive reactions from the blind visitors. "We usually have at least one blind guest a day. If he or she comes alone, we assist them with finding a seat and helping to choose from the menu in Braille, if necessary. However, it happens very rarely that they come without a sighted friend."

Though the teahouse is gaining in popularity, the founder of the idea can still see ways for improvement. "Reserving a stable place for the blind, preferably closest to the door would make it easier for them to find a seat. Moreover, there must also be space for a guide dog," says Drobný, who wants to take the project further. In cooperation with the Union of the Blind he would like there to be blind-friendly meeting-places covering the whole of Slovakia.