Slovaks get to know themselves

AN EXHIBITION that explores the question of Slovak identity has aroused the interest of both locals and foreigners. It has been running in Bratislava and the nearby town of Pezinok since late last year under the title The Slovak Myth. 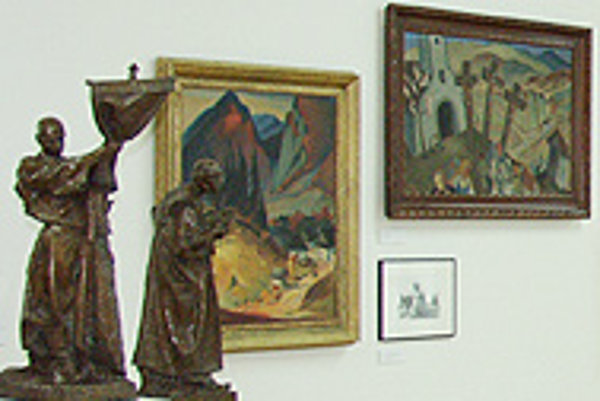 AN EXHIBITION that explores the question of Slovak identity has aroused the interest of both locals and foreigners. It has been running in Bratislava and the nearby town of Pezinok since late last year under the title The Slovak Myth.

The show uses a vast array of visual images to try to find an answer to the question: What does it mean to be Slovak?

Three institutions attempted to find the answer by assembling a mosaic of national life through historical symbols and visual arts.

"It seems we have perked the interest of not only local but also foreign visitors," said Katarína Bajcurová, the Slovak National Gallery director, as she browsed through the visitor's book. Several people, she says, have even suggested that this is exactly what a permanent exposition of Slovak modern art should look like.

Bajcurová was one of the Slovak Myth curators along with Aurel Hrabušický and Alexandra Kusá in Bratislava, and Katarína Čierna in Pezinok. The exhibition is on at Bratislava's Slovak National Gallery and Pezinok's

Gallery of Naive Art until the end of February. The show at the National Museum, which documented the

evolution of Slovaks through historical facts, signs and emblems, closed in December.

"The people who came here viewed the exhibits as objects that produce pious thoughts, that deserved respect because of their age. They were from the 19th and beginning of the 20th centuries," said Peter Maráky, director of the National Museum.

And while the museum put the emphasis on fact, which visitors were more or less familiar with from history and literature textbooks, the two art galleries depict Slovakia and its people through aesthetic works.

The Pezinok gallery focuses on the development of the myth of Juraj Jánošík, the legendary Slovak outlaw who "took from the rich and gave to the poor". The National Gallery reflects the "hard-working, fatalistic and singing nation" as captured by painters, sculptors, photo-graphers, film-makers and craftsmen.

The curators admit that it was not easy to work with the theme of the Slovak Myth. It has existed for centuries and potential material for such an exhibition is virtually inexhaustible. When choosing the exhibits the curators

had to assign particular criteria and restrain themselves from trying to include everything.

To orient the visitors, the curators divided the exhibition into 15 sub-topics. Individual sections include, for example, the Slovak family, the ideal of the female, feasts, Slovak muses, national architecture and Slovakia as the "land of spirit".

Part of the accompanying text is also in English. However, foreign visitors perceive the exhibition differently than Slovaks, who can "read in between the lines" and thus get a more complex experience, the curators say.

"I am certain that a foreign visitor will gain relevant information about our history, origin, character and mentality," Bajcurová said. "It's a picture of us, our identity and though it's not that explicit, the art on show

definitely stands out for foreigners, who think of the exhibition as 'most interesting' and 'very beautiful'."

National museum director Maráky praised the extent of the exhibition and the decision to use the galleries as well as the museum, which allowed different approaches.

Juxtaposing each artist's individual visions, Maráky says, gives a whole view of Slovaks and "not only in the positive aspects - as in the beauty of folk costumes and harmony of architecture with the landscape - but also in the less positive features - as in a certain melancholy - or even negative aspects such as the fondness for drinking".

"By raising new questions, the exhibition fulfils its goal," thinks Maráky, "as it is the variety that characterises the Slovaks and their culture, which is still in the fermentation process. The national idea of Slovaks is neither

outlived; nor does it belong to history, as some think.

"It is good that the curators didn't attempt to give a clear answer to their question on who we are: that would be the myth."