THE QUALITY of Slovak universities is low, claims the independent Academic Ranking and Rating Agency (ARRA) in its recent overall evaluation of public universities in this country. However, academics criticized the agency's comparative study as unreliable. 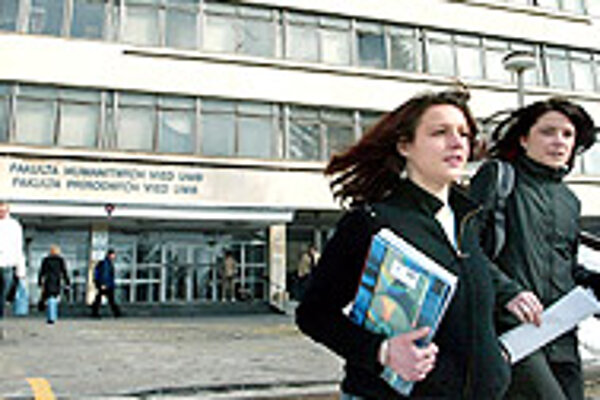 Font size:A-|A+  Comments disabled
THE QUALITY of Slovak universities is low, claims the independent Academic Ranking and Rating Agency (ARRA) in its recent overall evaluation of public universities in this country. However, academics criticized the agency's comparative study as unreliable.

One of the report's surprises is that Slovakia's oldest and most reputable university - Bratislava's Comenius - does not come top of the "league table". That honour goes to Košice's University of Veterinary Medicine.

The ARRA was founded by Ferdinand Devínsky, the former chancellor of Comenius University and a member of parliament for the ruling coalition SDKÚ party, along with former Education Minister Ján Pišút and former student leaders in the autumn of 2004.

The agency says its ranking should help prospective students to select a school or faculty.

The agency also hopes to give employees, state and regional politicians and university leaders a better understanding of how the country's higher education system works.

The agency collected data from 19 public universities, mainly from publicly accessible sources such as the Internet. They divided the country's 99 faculties into six categories: social sciences, humanities, medicine, natural sciences, technical studies, and agricultural studies. In cooperation with experts from the World Bank the agency created criteria that it asserts can measure quality.

The initiative was inspired in part by the government's failed attempt in 2004 to make students pay tuition fees to defray part of the cost of their education. According to opponents of the move, it failed because of a lack of in-depth information on the performance of universities.

However, some professionals say, in its rush to help the ARRA did not use proper evaluation criteria, which led to a distorted view of university education.

"The goal of the ARRA was to give the public a comprehensible overview of selected indicators characterizing the quality of [Slovak] universities, which in other words meant presenting them in the form of a chart," said František Gahér, the current chancellor of Comenius University.

"Contrary to the 'unflattering performance of public universities' that they presented to the media, an absolute verdict on quality cannot be derived from a relative comparison."

Although the report has been generally welcomed, its results have stirred a debate on whether the ARRA's chart is a valid indicator of the quality of Slovak universities. Objections have been raised that the ARRA drew conclusions from incompatible indicators.

Michal Fedák of the ARRA said: "Concerning the final table, the university chart, we thought about whether to include it in the report or not.

"Our board of trustees, which includes representatives of important employers, was also interested in it. However, anyone who wants a more detailed look at the quality of universities should look not only at the chart but also at the individual indicators."

The ARRA plans to publish its report annually. The agency believes that the rating could be a good tool for anyone wanting to compare universities in this country.

"We try for objectivity and we believe that our report could also help universities in their efforts to increase quality, as well as support competition among them. Whether and when it will be generally accepted is a different question," Fedák added.

Academics admit that such an evaluation has been missing until now.

"The ARRA study is something that has been missing in the academic sphere," said Juraj Sinay, chancellor of the Technical University in Košice, "but the indicators on which the evaluation is based are decisive, and those need to be convincing!

"Every attempt to judge quality - whether we're talking about a product, a service or educational and scientific activities - creates conditions for constant improvement," said Sinay, who thinks the ARRA's pioneering effort in the field could open up other opportunities for increasing the effectiveness of higher education in Slovakia.

"Naturally, a discussion on the objectivity of the results has to follow, as well as on the quality of the graduates from their [potential] future employers' point of view, and their scientific research activity," he said, adding that it will be interesting to follow other ARRA activities in the field, especially its dialogue with the universities involved.

The Education Ministry has supported the ARRA's "pioneering" attempt since its inception, granting it Sk5 million (€133,000), but not interfering in its activities.

Meanwhile, the ministry has been supporting two other university evaluations that are currently in progress - an extensive evaluation carried out by the Chancellor's Conference under the umbrella of the European University Association (EUA) that uses unified European criteria, and a complex accreditation of universities by Slovakia's Accreditation Commission that divides the universities according to the nature of their activities.

Several other evaluations have been going on in the country as well: Comenius University carried out one for its own purposes, while the media attempted to illustrate at least a partial picture.

The two above-mentioned in-depth evaluations are expected to bring out their results in two and six years, respectively. Nevertheless, it is mainly them the ministry is waiting for before making any significant changes to funding allocations based on the quality of the universities' performance. The EUA evaluation will be especially important, the ministry's Múrová says. The ministry has supported this study to the tune of Sk25 million (€660,000).

Currently, most of the funding from the state budget is divided up according the number of students; only up to 30 percent, the ministry states, is allocated based on quality indicators, such as science and research outcome. The ministry would like to increase this percentage but to do so it needs a reliable evaluation.

"Schools receive money from the state budget, and therefore using it effectively and fulfilling the mission of universities should be evaluated objectively," said Gahér.