Visitor rates rise and fall in 2005 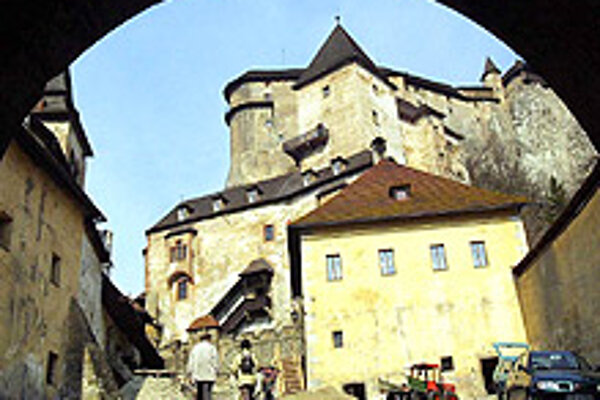 A RECORD number of people, more than 188,000, visited the monumental Orava Castle in Oravský Podzámok last year. This is about 9,000 up on the previous year.

Slovak tourists accounted for about 61 percent of the total visitors. Foreign visitors came from around 30 countries, with tourists from nearby Poland making up the largest portion. Many Czechs also visited the castle.

The director of Oravské múzeum PO Hviezdoslava in Oravský Podzámok, Mária Jagnešáková, told the TASR news wire that special events help to attract more visitors to the castle. Last year they organized about 20 special events, of which the most popular were the night tours and entertaining events for children. In summer, fencers' battles accompanied the regular tours.

This year, the castle will open its gates to visitors on May 1, or if weather permits, a couple days earlier.

FEWER tourists admired the beauties of castles in the Spiš region in 2005 than in previous years. Spiš and Kežmarok Castles reported a lower number of visitors and even the increasing number of tourists to Ľubovňa Castle failed to compensate for the overall drop.

The ruins of Spiš Castle, which is one of the biggest castles in Europe and a Slovak UNESCO heritage site, reported the biggest drop in visitors, down by 12,000 to 143,228 compared with 2004.

Dáša Uharčeková-Pavúková from the museum in Levoča told the Nový Čas daily that the drop was because the castle was closed for one month to serve filmmakers.

Even though Kežmarok Castle reported a drop in visitors by almost 4,600 to 33,724, sales grew by over Sk63,000 (€1,675). "It's because more adult visitors arrived to see the expositions," said Erika Cintulová from the Kežmarok museum.

The visitor rate at Ľubovňa Castle has been increasing since 2002.

Capital is happy with summer

BRATISLAVA City Council thinks last summer tourist season was successful. More than 358,000 Slovak and foreign tourists visited the capital from April to the end of September. This is almost 10 percent more than during the same period in 2004.

BOTH Slovak ice caves opened to public reported around 103,000 visitors in the May to September of 2005 period, the TASR news wire reported.

Demänovská Cave, close to Liptovský Mikuláš, reported a moderate increase of 2,000 visitors in 2005. Dobšinská Ice Cave in Slovenský Raj (Slovak Paradise) reported the same number of visitors as in 2004.

Both caves are closed in winter. This time is used for work on the caves and the paths are covered in ice. Moreover, the caves are a significant winter habitat for bats.

Mixed reactions in the High Tatras

HOLIDAY providers in the High Tatras hold different opinions on the summer season of 2005, first affected by the windstorm from November 2004 and then by fires in July 2005.

Director of the High Tatras' Tourist Association Peter Chudík thought the season was good and comparable with the previous year, the daily SME reported. Hotel owners were satisfied with the summer season saying that they had enough guests. Operators of main cableways reported a 12-percent increase in the number of passengers.

On the other hand, mountain guide Pavol Rajtár considered the 2005 summer season to be the worst in the High Tatras in last few years. The head of the Tatras National Park (TANAP) administration Tomáš Vančura concurred and spoke about a visibly lower number of visitors. He also attributed part of the drop to bad weather in August, which had only five sunny days.

The number of visitors from Poland and the Czech Republic decreased in summer but more people arrived from Great Britain, Germany and southern Europe.

Jaroslav Špičuk from the park's administration blames in particular rainy and cold summer days. Another reason was the chaos in the recently introduced entrance fees that range from Sk20 to Sk40, which discouraged tourists from coming.