Finding the fun in corporate greed

YET ANOTHER Hollywood romantic crime caper might not sound like all that much fun, but Fun with Dick and Jane nearly earns its title, or at least it does until the crime part takes over. 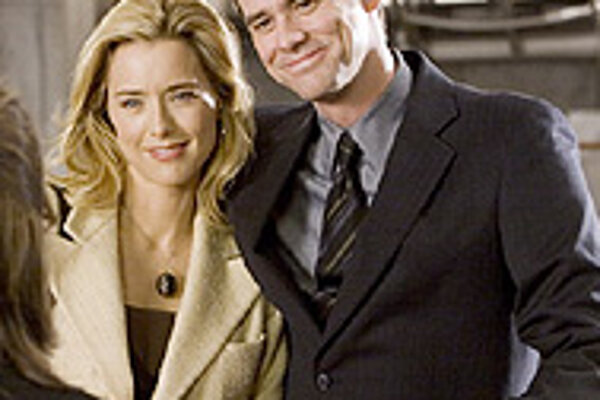 Fun with Dick and Jane

YET ANOTHER Hollywood romantic crime caper might not sound like all that much fun, but Fun with Dick and Jane nearly earns its title, or at least it does until the crime part takes over. As a remake - of the 1977 movie starring Jane Fonda and George Segal - Fun with Dick and Jane focuses on a familiar scenario, be it drama or comedy: A couple go on an extensive, and lucrative, crime spree. The true success of 2005's Dick and Jane lies in its satire, a biting take on contemporary corporate corruption.

Corporations have, of course, always engaged in corrupt activities, but the last few years have brought scandals seemingly bigger than ever before - with the two most famous being those involving the US company Enron and the Italian company Parmalat. It's from the former that Dick and Jane gets its primary inspiration and most of its best humour.

Dick Harper (Jim Carrey) has the perfect life: a beautiful home, a beautiful wife, Jane (Tea Leoni), a beautiful son, and a lucrative job with a powerful company. When he suddenly gets promoted to Vice President of Communications, Dick understandably believes that things will only get better. What he doesn't realize, however, is that his company, Globodyne, will soon take a gigantic nosedive.

After learning of his promotion, Dick has a leisurely business breakfast with Globodyne CEO Jack McCallister (Alec Baldwin) and CFO Frank Bascombe (Richard Jenkins), who both quickly congratulate him and explain his new duties. When they tell him that he'll soon appear on a business news programme to give the company's latest financial projections, they do so with a maniacal gleam in their eyes. What Dick doesn't realize is that Globodyne has consistently lied about its profits - thus inflating its value on the stock market.

The company immediately goes under - leaving all of its employees jobless. Dick remains optimistic about finding other work, but as the months drag on and no new jobs appear, he and Jane resort to a life of robbery to maintain their comfortable life. At this point the movie falters dramatically - resorting to foolish slapstick and criminal mishaps for its humour.

Before this point, though, it mines the current political, corporate, and social landscape for some surprisingly effective satire. Because Dick and Jane are both busy professionals, they rely on their Latina housekeeper Blanca (Gloria Garayua) to raise their son, Billy. As a result, Billy frequently speaks in Spanish (which neither Dick nor Jane understand) - a clever comment on both changing ethnic demographics in the US as well as the phenomenon of children raised not by their parents, but by hired help. The movie consistently lampoons the incessant greed common in corporate culture: Globodyne CEO Jack McCallister, who orchestrated the fake financial figures, spends his time hunting and relaxing at a mountain retreat while his former employees unsuccessfully scramble to make ends meet.

In the film's beginning, almost nothing is spared; Starbucks, Wal-Mart, illegal immigrant labour, a dismal job market, and - not least of all - the Bush administration become the butt of barbed jokes. But unimaginative robbery scenes and some forced physical humour involving both humans and animals undermine much of the film's cleverness.

The performances are all fine, if not fantastic. Carrey and Leoni are both likeable in their lunacy. Baldwin and Bascombe excel at portraying corporate sleaze. The movie would have benefited from giving them more screen time; the scenes that focus on the fall of Globodyne and its immediate effects are easily the film's best and most complex. But this is Hollywood, after all: Like any big business, it frequently takes the easiest route.