SLOVAKIA bade farewell this past week to the victims of its worst-ever airplane crash, which on January 19 claimed the lives of 42 crew and soldiers serving on a NATO peacekeeping mission in Kosovo. 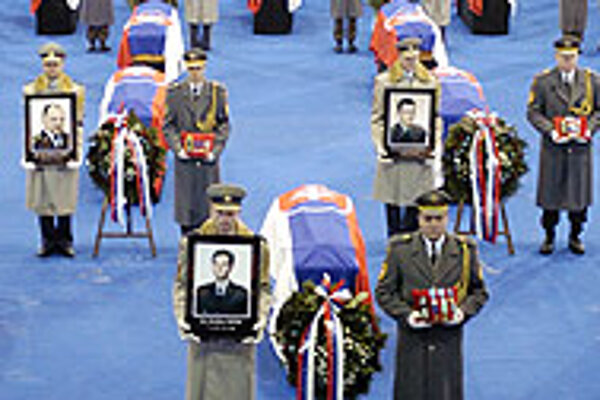 Font size:A-|A+  Comments disabled
SLOVAKIA bade farewell this past week to the victims of its worst-ever airplane crash, which on January 19 claimed the lives of 42 crew and soldiers serving on a NATO peacekeeping mission in Kosovo.

The Ukraine-built Antonov 24 airplane was just minutes from a scheduled landing in Košice when it slammed into a forested hill near the Hungarian village of Telkibánya. The flight had originated in Pristina, the capital city of Kosovo.

As condolences arrived to Slovakia from international diplomatic and military circles, an investigation into the cause of the air crash continued, with increasing focus on the possibility of pilot error.

Only one man, 27-year-old First Lieutenant Martin Farkaš, survived the tragedy. Shortly after the crash he even managed to call his wife Michaela from his mobile phone to tell her that the plane had gone down. After the phone signal was lost, Michaela Farkašová alerted emergency services.

Farkaš, who suffered a concussion but no major internal injuries, regained consciousness after a few days in an induced coma, but was unable to remember the circumstances of the crash.

"The investigation continues and the black box from the plane is being analyzed as well. The length of the investigation is hard to estimate, but it may take weeks or even months," Defence Ministry spokesman Zenon Mikle told The Slovak Spectator.

Slovakia declared a day of official mourning for the victims starting at noon on January 23 with the wailing of sirens and lasting until noon the following day. Flags were lowered to half-mast at all state institutions and requiem masses were held in Bratislava and Košice.

Cities across Slovakia remembered the victims of the air crash with the flying of black flags, traditionally used in Slovakia after the death of figures of national importance.

Zdenko Trebuľa, the head of the Košice region government, expressed condolences to the families of the victims, many of whom hailed from the east of Slovakia.

"It was a tragic moment for the region of Košice. Many of the victims came from this area and have families here. They all feel immense pain for their closest family members. At least symbolically we would like to show our deep condolences and sympathies," Trebuľa said.

Cabinet officials said that apart from the compensation legally due to them the bereaved families would also receive special financial aid from the government.

A mass funeral for the victims took place on January 26 in Prešov, attended by state officials and international guests such as NATO Secretary General Jaap de Hoop Scheffer, as well as hundreds of mourners and the bereaved families.

"It's hard to find words to express my deep sorrow. I'm glad to have known them and that these true professionals served in the Slovak armed forces," said Defence Minister Juraj Liška at an initial press conference shortly after the news of the tragedy hit the wires.

Condolences arrived from around the world, including from Pope Benedict XVI, who said he would pray for the souls of the soldiers, many of whom were in their 20s. Three of the victims were women.

UN Secretary-General Kofi Annan also extended his condolences to the Slovak government and to the bereaved families.

"The secretary-general was saddened to learn that 42 Slovak soldiers and civilians, serving with the NATO-led Kosovo Force, were killed following the crash of a military plane in north-eastern Hungary. He extends his profound condolences to the Slovak government and the bereaved families, and wishes a speedy recovery to the sole survivor," a spokesman for Annan said in a press statement.

"I especially want to point out that these soldiers were helping in Kosovo. They provided assistance to those who needed it most," Petersen told Kukan during the call.

"I was grieved to hear of the death of so many Slovak soldiers in Thursday's tragic air accident. These soldiers were returning to Slovakia after helping to bring stability and security to the people of Kosovo. Their families and Slovakia as a whole can be justifiably proud of their military service. In the name of the whole of NATO, I would like to express my deep sympathy for the families of the victims," Scheffer said.

Although the investigation into the cause of the crash is still ongoing, initial evidence suggested that the plane, although 37 years old, was technically sound and had undergone regular checks.

Speculation as to pilot error grew after it was revealed the pilot had informed the Košice control tower he would land by sight, meaning without radar assistance, something he would not logically have done if the plane was in trouble.

However, without the final results of the investigation, authorities would not comment on the causes of the crash. Slovak Air Force Commander Juraj Baránek confirmed that the pilots had not reported any problems to air traffic control prior to impact.

Defence Ministry spokesman Mikle said the Army's An-24 and An-26 planes were in good condition, and that Minister Liška, Slovak Army Chief of Staff Ľubomír Bulík and other top defence officials regularly flew on the planes.

"No responsible defence official would send a plane into the air if he had the slightest doubt over its condition," said Mikle.

He added, however, that Liška had halted the use of the Antonov-24 and Antonov-26 planes indefinitely due to the ongoing investigation.