Homeless finally come in from the cold

BREATH pluming from their mouths, a line of about 40 men swung their arms and stamped their feet in the painful January cold. 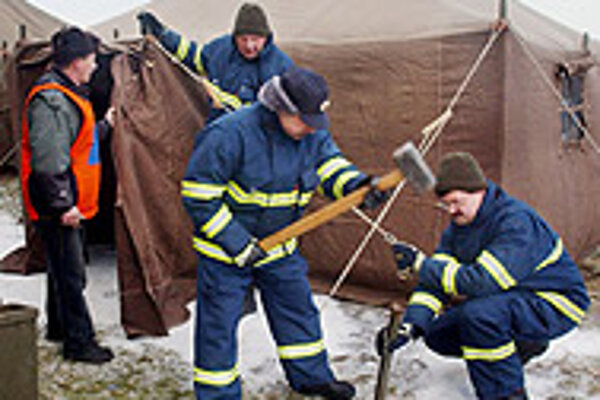 Font size:A-|A+0
BREATH pluming from their mouths, a line of about 40 men swung their arms and stamped their feet in the painful January cold.

Stano Ševčík, 53, and Juraj Galba, 59, were among those waiting to be registered for a berth in an army tent. Like the rest, they are homeless in the coldest weather Slovakia has experienced in decades.

Like the rest, they do not want to die on the street.

"It took us an hour to get here, and I've been waiting in line for another hour," said Galba, hauling on a cigarette between weather-thickened fingers.

A cold snap that has broken water mains and even frozen the fuel in the tanks of city buses has also made the plight of Bratislava's homeless desperate.

Eighteen homeless people have died in Bratislava since the start of winter, most of them from exposure. The city has only 100 regular beds for over 2,000 homeless residents.

The alarming number of deaths this year has increased official interest in the fate of people on the street. The Interior Ministry opened an emergency camp for the homeless on January 19, providing heated army tents with cots in the remote Bratislava suburb of Vrakuňa.

"If needed, the tent camp for the homeless can be enlarged," said Interior Ministry spokesman Tomáš Kříž.

Interior Minister Vladimír Palko visited the Vrakuňa camp on January 23 and said that the army tents could also be erected in other parts of Slovakia if requested.

The Bratislava camp at the Mea Culpa shelter on the city's outskirts currently houses 16 tents providing around 220 beds free of charge, as well as warm suppers, hygienic facilities and medical care. On the first day it was opened, 18 people took shelter there, but as the cold continued and even deepened over the following days, the number of people seeking refuge climbed.

By January 23, with temperatures in the Slovak capital at -20 and a strong wind blowing, the camp was full.

While Slovakia keeps no official statistics on the number of homeless people, the Labour and Social Affairs Ministry estimates that there are around 4,000 people living on the streets around the country, and around 60 shelters offering a total of 1,130 beds.

The country's regional governments have administered city homeless shelters since 2002, and have the power to build new ones. More shelters are run by NGOs.

But officials say it is not only a lack of room at shelters that makes winter so hard on the homeless - indeed, shelters are rarely full - but the reluctance of street people to accept the help available.

"The homeless are not willing to obey the rules of the shelters, such as no alcohol," Labour Ministry spokesman Martin Danko told The Slovak Spectator.

While regular homeless shelters have a strict no-alcohol policy, the emergency camp is open to everyone in whatever state they arrive.

Other factors contributing to the number of deaths include the fact that homeless people are often not registered with state welfare offices, preventing them from receiving welfare benefits, Danko said.

Local NGOs welcomed the tent camp, but said that help should have arrived much sooner.

Activists with the Proti Prúdu and Hľa, človek NGOs started a petition in December to draw attention to the dangers of winter for homeless people.

"It's quite late for something like this to be set up," agreed Marta Sárköziová from the Mea Culpa shelter, which is beside the tent camp.

"But we'll probably continue to see more tragedies, as many people don't want to accept help."

Some of Bratislava's homeless seek shelter in abandoned and derelict houses or beneath bridges, but many simply fall asleep on the streets.

Sárköziová said that even after the tent camp was opened, she and her colleagues had seen up to 20 people sleeping on the streets on their way to work. Many did not know of the tent camp option, she said, while others were drunk.

Sárköziová took the girl to her room in the regular shelter. Mirka had been on the street with her father for a week after he lost his job and was unable to pay the rent.

Ševčík and Galba are among the lucky ones; as homeless people they have jobs selling the Nota Bene magazine on the street.

They heard about the tent camp while watching television at the Bratislava main train station, a popular place among the homeless who warm themselves on its radiators.

They said the camp was a welcome respite from the fierce weather, but complained that it was so far away from downtown - about 10 kilometres - that many were discouraged from visiting.

He added that with the camp kicking out its residents at 8:00 in the morning and opening for them again "too late" at 18:00, the homeless faced 10 hours in the chill, and tended to rely on alcohol to keep warm.