THE DEATH of one party in mid-January and the birth of another - an unwanted baby, say critics - has altered the look if not the substance of Slovakia's political landscape. 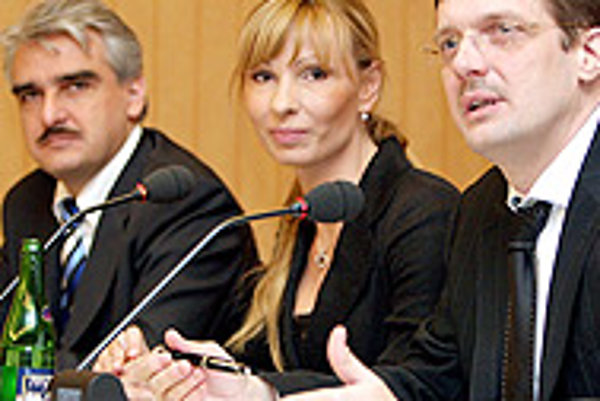 Font size:A-|A+  Comments disabled
THE DEATH of one party in mid-January and the birth of another - an unwanted baby, say critics - has altered the look if not the substance of Slovakia's political landscape.

The demise of the Democratic Party (DS), one of the country's oldest political players, was welcomed by political analysts, while the emergence of the Nádej party was dismissed as "a completely hopeless project."

The week's political developments are not expected to have a major impact on the fortunes of either government or opposition parties ahead of scheduled September 2006 elections, but were cautiously welcomed as bringing greater unity to the right side of the political spectrum after the liberal DS merged with the centre-right Slovak Democratic and Christian Union (SDKÚ) of Prime Minister Mikuláš Dzurinda.

"Although the merger will probably not yield many more votes, the idea of unifying the right wing is appealing to quite a large group of voters. This can help," said Pavel Haulík, an analyst with the MVK polling agency.

But it was the founding of Nádej ("Hope") that drew the strongest reactions.

The party represents the ambitions of three politicians - Economy Minister Jirko Malchárek, Culture Minister František Tóth, and former Deputy Health Minister Alexandra Novotná - to cobble together a platform from which to contest the September elections.

At the moment Malchárek and Tóth are not members of any party, having last fall quit the now-opposition New Citizen's Alliance (ANO). ANO left the ruling coalition in protest after conflict of interest allegations cost ANO Chairman Pavol Rusko his cabinet seat as economy minister.

Nádej, like ANO, will follow a liberal platform, and plans to collect the 10,000 signatures required to be registered within the next two months.

According to Novotná, Nádej wants to address fresh faces who want to enter politics.

"This is a chance for all people from the regions and all areas of society that have been successful in their professions and still have not lost hope that by entering public life they can change things for the better," she said in presenting the new party on January 22.

Tóth said the party stands for market economy principles, minimal state interference in society and the economy, and civic justice.

The new party, said its founders, will also support a further devolution of state power to the local level, and will push for a 15 percent flat tax, rather than the current 19 percent.

Haulík told The Slovak Spectator that the Nádej project was "absolutely and totally hopeless".

"The initiators of this idea showed that they have not reflected at all on their activities in politics so far. If they had taken a realistic look at their chances, they wouldn't have started something like this," Haulík said.

Miroslav Kusý, a political analyst with the Slovak Academy of Sciences, shared his opinion.

"The party has no chance to succeed at all. It has no membership base, nor can it gain one," Kusý told the TASR news agency on January 22.

Kusý said he believed that Nádej's founders just wanted to give themselves higher profiles as individuals ahead of the upcoming elections.

"This is a project that has emerged from the decline of ANO. I don't think it has a very good chance," Mesežnikov said.

According to Haulík the party will likely not win enough support ahead of elections even to play a spoiling role or swing its voters to another party.

Parties with less than 5-percent voter support in polls, the level required for seats in parliament, sometimes call on their supporters to back a stronger party.

The last time this happened was four years ago, when the DS called on its voters to vote for the SDKÚ, following which DS Chairman Ľudovít Kaník was named Labour Minister by the SDKÚ.

On January 21 a national congress of the SDKÚ party approved its merger with the DS. The latter, a small non-parliamentary party, had been close to the SDKÚ for some time, with Kaník leading the Labour Ministry until recently.

The merger aims to consolidate the right wing in Slovakia.

"Parties that receive infusions develop better than those that reject new blood," said Dzurinda at the congress.

Analysts believe the move could benefit both the SDKÚ, which has up to 10 percent voter support according to various polls, and the DS, which has around 1 percent.

However, the merger did not appeal to all DS members, and was passed by a one-vote majority at the end of 2005.

According to Haulík, those DS members who oppose the merger with the SDKÚ could join another tiny right-wing party, the Civic Conservative Party (OKS).

"I think the OKS could become a haven for those who disagree with the merger," he said.

DS deputy chairman Braňo Hochel, who opposed the merger, said that around 40 people in the party "have declared a desire to establish a new DS".

Mesežnikov said the merger was especially profitable for the SDKÚ, as it had "fulfilled the party's plan to integrate the Slovak right wing.

"The SDKÚ also gains an interesting brand name [DS] which has been active here since after the fall of communism [in 1989]," Mesežnikov said.

The SDKÚ has also proposed that the three right-wing parties of the current ruling coalition - including the Christian Democrats and the Hungarian Coalition Party - work closely together during the election campaign, but so far has not received a definite answer.