AFTER being treated by doctors and dropped off at the gate of a shelter in Trenčín a man froze to death only metres away from safety. The man did not go into the shelter and stayed out on the street. 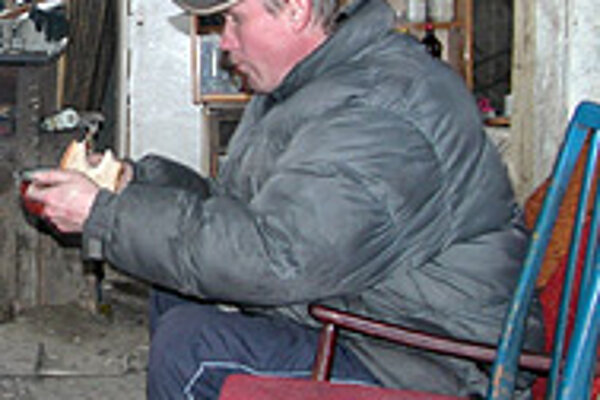 Font size:A-|A+  Comments disabled
AFTER being treated by doctors and dropped off at the gate of a shelter in Trenčín a man froze to death only metres away from safety. The man did not go into the shelter and stayed out on the street.

Police in Prešov saved a man who was just about to lie down next to a shopping centre in temperatures of -21 degrees Celcius at 3:30 in the morning. They took him to the town's police headquarters and made him a bed up next to a radiator.

The freezing nights that have claimed several victims across the country have induced many towns to extend a helping hand.

Some, following the example of Moscow, are leaving train and bus stations open overnight for the homeless. Doctors have been provided to cure frostbite.

Several shelters, such as the one in Poprad, have extended their opening hours to include the day as well as night. Town authorities and activists are also strengthening cooperation between the police and public, asking them to take in or inform them of homeless people in the street.

But there are limits to the help that can be offered, and the main reason is alcohol.

Etela Lučivjanská, head of the social department of Poprad Town Council told Radio Express: "I regret that we provide them with clothes and warmth, but they refuse to stay. We show them the way but they have to walk it themselves."

Sandra Tordová from the Proti Prúdu NGO explained for the weekly Týždeň that alcoholism is "the consequence of the difficult situation the long-term homeless face", and that one possible solution would be if centres let in alcoholics.

A pioneering shelter that is letting in alcoholics is the tent camp at the Mea Culpa shelter in Bratislava. The camp, like other shelters for the homeless in Slovak towns run in cooperation with civic and charity organizations, is only a short-term solution. When winter ends, the homeless will be cast back on the streets and their everyday struggle will start up again.

Slovakia is only starting to learn of more complex solutions for homelessness. The NGOs are trying to initiate more mobile streetwork and suggest operating the current shelters all the year round and enlarging the number of beds.

The aim to improve the social network for people without shelter, however, often runs up against the fears of local residents that the services will attract more homeless people to the town. Tordová from Proti Prúdu told the weekly that an improved system does exactly the opposite.

"In Vienna they've enlarged the service for the homeless, launched new social and work programmes, which resulted in a drop of people sleeping in shelters from 1,200 to 800. The services network has caught many people before they hit the bottom and many pulled out of it."

NOTE: Bratislava is a Mecca for the homeless. Passers-by who find freezing homeless people in the city's streets can call the SOS line 0907/733-388 between 16:00 and 20:00. A van supported by Proti Prúdu NGO will come and pick them up.