"BALLET is a young person's game," writes John Rockwell of The New York Times. "If you reach 40 and are still dancing principal roles, you're considered some kind of quirk of nature - or resented by younger dancers for blocking their potential career paths." 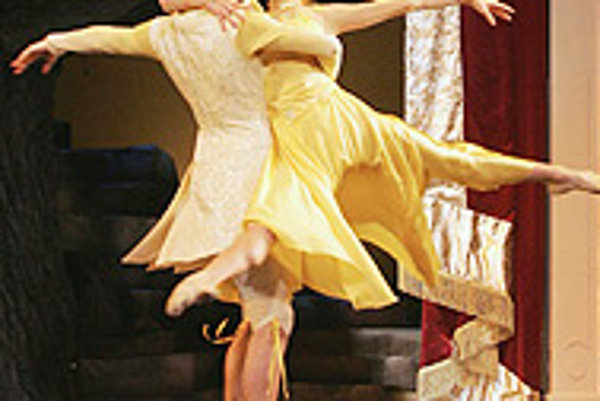 "BALLET is a young person's game," writes John Rockwell of The New York Times. "If you reach 40 and are still dancing principal roles, you're considered some kind of quirk of nature - or resented by younger dancers for blocking their potential career paths."

And that is appropriate for a comedy that, like Romeo and Juliet, focuses on young lovers, albeit with a happier ending.

The ballet begins as Egeus arrives in the court of Theseus, the Duke of Athens, to request that his daughter Hermia be ordered to marry Demetrius. Hermia loves Lysander, though, and refuses, despite the threat of life in a nunnery or death. To escape this fate, Lysander and Hermia sneak off into the woods to marry. Hermia's friend, Helena, learns of their plans and informs Demetrius, who joins her in following them.

Frey's choreography wedded rigorous ballet technique to the youthful sensuality of modern dance. With legs nicely turned out and feet pointed, the dancers eagerly pulled each other close, swung in circles, ducked under and around with silken fluidity, and playfully slid over each other.

This all happened on top of Peter Zagar's confusing score, which offered the audience only two paths: the obvious or the bizarre. Zagar's use of a wide range of instruments from the modern orchestra, though, did give the music a distinctive versatility.

The story continues in the woods as Oberon, King of the Fairies, and Puck, his loyal but mischievous servant, entertain themselves with the young humans' travails. Oberon orders Puck to enchant Demetrius with a magic flower so he'll love Helena instead of Hermia, but Puck enchants Lysander by mistake. Oberon attempts to correct things by enchanting Demetrius as well, but even this results in chaos, as both men end up in love with Helena and begin to fight over her. Oberon finally creates a thick fog to separate everyone and let the spell wear off.

František Šulek (Oberon) showed flexibility, good extension during leaps, and precision. But, as in the original play, Puck was undoubtedly the centre of attention. Juraj Žilinčár (Puck) featured the trademark of a great physical comedian - the ability to go over the top while maintaining complete control. His jumps were high and graceful and each of his scenes was hilarious.

The story ends when Theseus and Egeus find the young lovers in the woods and agree to let them choose who to marry. Everyone returns to Theseus' court for a celebration and the fairies frolic.

But the choreography remained uneven. The young soloists' scenes were always very clear, but the corps de ballet's choreography often seemed unconnected to the drama, which slowed the story rather than advancing it or adding dimension.

Nonetheless, it is clear that certain stars in the SND Ballet's own indigo sky will continue to shine brightly in the years to come.