And the love machine rolls on

ACTOR Jean-Luc Bideau, 65, is one of the most famous stars in his own country, Switzerland, especially its French-speaking part. His wife, a Czech native, refuses to eat out with him because Bideau feels obliged to engage with fans who have done him the honour of seeing his films, and therefore quiet dinners often turn into heated debates. 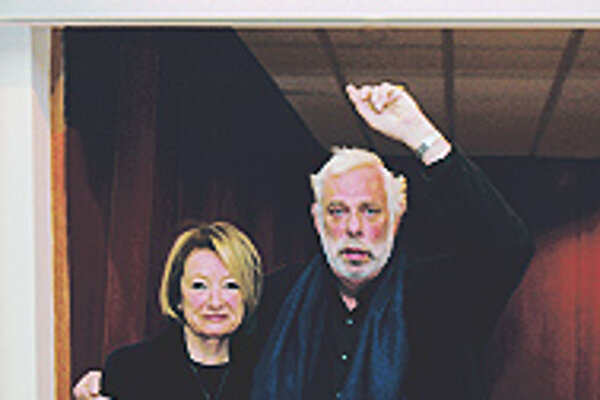 Font size:A-|A+  Comments disabled
ACTOR Jean-Luc Bideau, 65, is one of the most famous stars in his own country, Switzerland, especially its French-speaking part. His wife, a Czech native, refuses to eat out with him because Bideau feels obliged to engage with fans who have done him the honour of seeing his films, and therefore quiet dinners often turn into heated debates.

In Bratislava, where French-language film is still an exception in the cinemas, they do not have this problem. Only a fistful of moviegoers might recognize Bideau's face. Nevertheless, heads turn as he passes. Jean-Luc Bideau is a person who cannot stay still and whose witty comments attract the attention of passers-by.

"I was a bit worried when I invited him to come to Slovakia," laughs Christophe Vauthey from the Swiss Embassy in Slovakia, after Bideau remarked that he is just a "poor actor from Switzerland, jealous of other actors, such as the incredible Slovak, Martin Huba".

The embassy, in cooperation with the French Institute in Bratislava, invited Bideau to attend last week's event that screened a selection of the actor's more than 120-film repertoire at the capital's Mladosť cinema. His wife, Marcela Salivarova-Bideau, accompanied him, and the couple shared their story, which started 40 years ago, right in this town.

"The first time I saw him was in Praha-Ruzyně in 1966," Salivarova-Bideau recalls. The group of French actors from the National Popular Theatre of Villeurbaine landed at Prague's airport. Soon they moved to Bratislava from where they kicked off their Czechoslovak tour.

"There was a windstorm, they arrived very late. They all vomited, the entire ensemble was in a terrible state. I was their translator, so when I was collecting the passports to hand them out to the police, I had time to see who was in the group. I saw that Jean-Luc was free and a bit older than me. I was 25 at that time and ready to marry," says the philologist Salivarova-Bideau, with no accent in her Czech, who knew she wanted to marry an actor.

After the Bratislava perfor-mance, the group's actors gathered in the foyer. The Slovak actors' doyen, the famed Jozef Kroner (1924-1998), who starred in the 1965 Oscar-winning movie The Shop on Main Street, asked Marcela where she would like to sit. She pointed at the tall Swiss.

"Because of Kroner we've been together for 40 years. Děkuji [Thank you] Mr Kroner," says Jean-Luc sighing heavily and his wife laughs.

A month after August 1968, when Russian troops "invited" the then Czechoslovakia to uphold the Communist system, Marcela left the town of her birth, Prague, to marry Jean-Luc in Switzerland. "Everybody was running away. I was worried that the borders would close, because I knew I wanted to travel."

Life back then, they agree, was not easy. Jean-Luc was unemployed, Marcela's father died. During the Czech movie wave in the 1970s Bideau enrolled at Prague's Film and TV School of the Academy of Performing Arts to study directing. In between, he acted in Swiss films, which aroused interest in France. "Suddenly, Jean-Luc had a lot of work," Marcela says.

After the Czech Interior Ministry became interested in her "cooperation" she stopped her frequent visits to her homeland. Their son, born soon after the wedding, therefore speaks good Czech, their daughter not so good.

At the age of 40 Marcela realized she wanted to be closer to the "man who lives in film and theatre". Also to understand his work better, she agreed to direct him in a monologue, Strategy for Two Hams, the philosophical musings of a pig prior to slaughter, by Raymond Cousse. They worked on a few other joint projects but Marcela found it difficult.

"Directing is hard work, a question of survival for me," she says, adding that directing her husband was even harder. "We are so close to each other, we often had conflicts."

Their son came up with the same remark each time his perfectionist mother began to direct his careless father: "And the machine began rolling again."

The couple says Bratislava now reminds them of the Prague they know so well.

"It's so clean and light now. Back then it was like a gem that needed polishing," Salivarova-Bideau says, before adding "but which had its magic."