TwoOne on final approach to airports

THE TWOONE consortium will become the new owner of Slovakia's two largest airports unless the country's antitrust authority rules the deal could harm competition in the region. 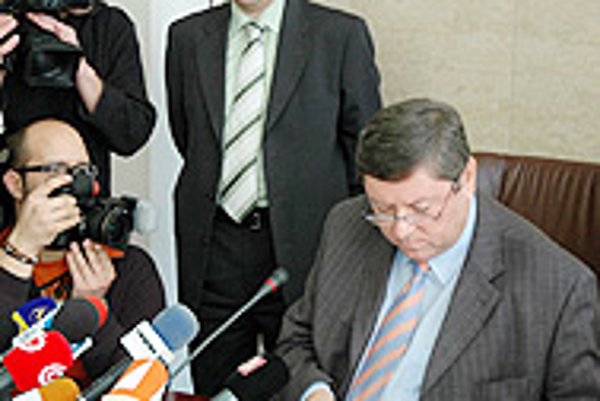 Font size:A-|A+  Comments disabled
THE TWOONE consortium will become the new owner of Slovakia's two largest airports unless the country's antitrust authority rules the deal could harm competition in the region.

Following a tumultuous privatization process, the Slovak cabinet approved TwoOne, consisting of Vienna Airport, Austria's Raiffeisen Zentralbank and the Slovak capital group Penta, as the strategic partner for the Bratislava and Košice airports. TwoOne will pay Sk11.42 billion (€305 million) for a 66-percent stake in the facilities.

The consortium emerged victorious following a second-round "showdown" between the two top-ranked bidders from the first round of the sale. The runoff was called after TwoOne had been named by the tender commission as the winner, and followed an outcry over fears the presence of Vienna Airport in the consortium would cause it to hamper the development of air transport in nearby Bratislava.

After offering more money for the airports than competitors Abertis and the British TBI in the regular tender, TwoOne again beat out its rival with an offer of an additional Sk4.52 billion (€122 million) compared to Abertis' Sk3.3 billion (€88 million), Transport Minister Pavol Prokopovič revealed when opening the runoff-round envelopes on January 27.

"I am satisfied with the bids, which prove that Bratislava Airport is immensely attractive and indicate that the bidders are both very strong," Prokopovič said.

In the first round TwoOne offered Sk6 billion (€159 million) for Bratislava Airport, beating Abertis' offer of Sk3.3 billion. However, Abertis' development plans for the airports were rated higher than TwoOne's concept.

Under the rules of the second round, whichever consortium offered a higher supplementary price - regardless of their previous bids or investment intentions - was to win.

As justification for calling the run-off, Prokopovič cited the fact that the difference between the previous bids by TwoOne and Abertis was only 2.5 points, which meant the contest was too close to call. TwoOne's bid for Bratislava Airport was awarded 77.75 out of 100 points, while Abertis scored 75.25 points.

The state is expected to sign a contract with TwoOne by February 28.

The final investment contract may contain the provision that if the investor does not make the investments promised in its business plan, the state has the option to buy back the shares.

The investor cannot transfer the airport shares for five years after signing the contract. After this date the investor will still need approval from the state, which will remain a minority shareholder.

TwoOne is to pay 30 percent of the purchase price on signing the purchase contract and the remaining 70 percent on the fulfilment of additional terms.

However, the bumpy tender is still not over for TwoOne, which has an additional reason to be nervous. If the Antitrust Office (PMÚ) fails to rule on TwoOne's entering the Slovak airports by August 15, Bratislava and Košice will automatically go to Abertis as the second-place bidder.

"TwoOne must obtain all of the necessary approvals from the state bodies involved by August 15. If the consortium fails to meet the deadline, the cabinet will receive a new proposal that the airports be sold to Abertis by September 1, 2006," said Transport Ministry spokesman Tomáš Šarluška.

The PMÚ is required to make decisions according to deadlines set by law.

"The parties to the concentration, in this case TwoOne, are obliged to report the concentration within 30 days after signing the contract," PMÚ spokesman Miroslav Jurkovič told The Slovak Spectator.

According to Jurkovič, the PMÚ must rule on the deal within 60 working days after it receives notification of the deal, which must include all the requested information. However, this deadline may still be extended by another 90 working days.

Although Abertis is not completely out of the game, the consortium, consisting of Slovakia's J&T and Spain's Abertis Infraestructuras, is not happy with its second place finish in the airport race.

J&T spokesman Maroš Sýkora alleged that the supplementary bid by TwoOne, which was "higher than any purely economic assessment would justify", proved that Vienna Airport "doesn't care about the economic development of the [Slovak] airports, but rather about building a monopoly and thus eliminating any competition in this area.

"We are disappointed, because we were interested in developing the airport. The bids exceeded expectations in the [first] round, and the sums that were offered in the supplementary round exceeded those already high prices," Sýkora told the TASR news wire.

TwoOne maintains that it submitted the best bid for the long-term development of the airports.

"We are confident that we submitted the best development plans," Herbert Kaufmann, spokesman for TwoOne board of directors, wrote in a memo sent to The Slovak Spectator.

"We are ready to make improvements very quickly. The first changes for the better will be visible this year. The Bratislava airport will be bigger, more modern and more comfortable," Kaufman added.

Meanwhile, another attempt by the political opposition to halt the privatization of the airports failed on January 31 when they were unable to collect a simple majority of 76 votes in the 150-seat parliament.

The Slovak Communist Party (KSS) called on the cabinet to publish the draft agreement to be signed with TwoOne, as the party intends to watch the investor closely to see whether it meets all the conditions of the contract.

According to the privatization document that the cabinet discussed on February 1, Bratislava Airport posted a loss of nearly Sk90 million (€2.4 million) for the first 10 months of 2005 on total revenues of Sk1.573 billion (€42 million). The company had 550 people on its payroll at the end of last October.