AT THE START of the New Year, Austria took over the rotating presidency of the European Union. During the first six months of 2006 the Austrians will chair around 2,000 EU meetings, and hope that their being in the spotlight will focus international attention on this corner of Central Europe, including the Austrian and Slovak capitals. 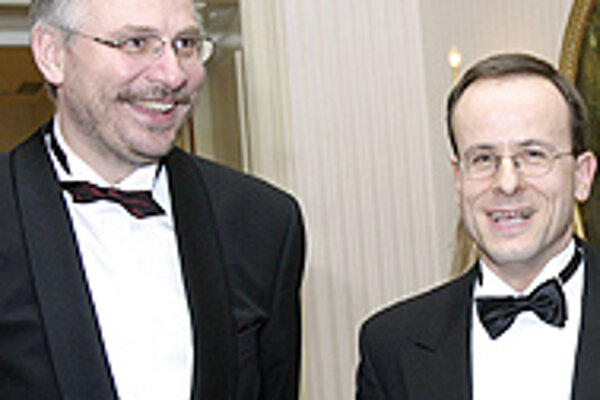 Font size:A-|A+  Comments disabled
AT THE START of the New Year, Austria took over the rotating presidency of the European Union. During the first six months of 2006 the Austrians will chair around 2,000 EU meetings, and hope that their being in the spotlight will focus international attention on this corner of Central Europe, including the Austrian and Slovak capitals.

Developing the region between the two cities, which lie only 60 kilometres apart, has been a dream of Slovak policymakers since the fall of communism, and Slovakia's accession to the European Union has given it added impetus.

Enthusiasm for the project was high at the 10th Annual Slovak Ball in Vienna on January 28. Politicians, diplomats and entrepreneurs used the occasion as an informal forum to renew business and social contacts between their countries.

"The Vienna-Bratislava city region, which has often been described by the media and business circles as the Twin Cities, could become one of the three or five strongest and most famous regions in Europe," said Bratislava Mayor Andrej Ďurkovský.

The two capitals began to work seriously on strengthening ties between them several years ago.

Representatives of both cities say the Twin Cities project is a chance to create an economic and cultural hot spot in Central Europe, and to deepen the overall economic and social relationship between their two countries.

Slovakia and Austria are important players on each other's markets. Austria is the third largest destination for Slovak exports and the sixth biggest exporter to Slovakia. Last year, Austria was the largest investor in Slovakia.

Of course, Austrian-Slovak relations are not without their sore spots. Austria has still not signed an agreement with Slovakia that would enable Slovaks to be employed in border areas, although it has signed such an agreement with Hungary and the Czech Republic. Nor has Austria fully opened its market to workers from new EU countries, including Slovakia.

Slovaks are at pains to remind Austria that their economic cooperation is mutually beneficial, not advantageous only for Slovakia.

The ball was co-organized and sponsored by IPEC Group and held under the auspices of Austrian Foreign Minister Ursula Plassnik and Slovak Ambassador to Austria Jozef Klimko.

Ivan Čarnogurský Jr, managing partner of Bratislava-based Ipec Group, said that if economic data is interpreted correctly, Vienna can be seen to be profiting "enormously" from its neighbour.

"It's also apparent in Bratislava that the proximity of Vienna has an impact," Čarnogurský Jr added.

As more infrastructure projects are undertaken together and transport corridors are built, the cooperation is leading to "a human togetherness", Čarnogurský said.

"We're very interested in ensuring that the quickly growing economic relationship between Austria and Slovakia is also deepened on a human level."

Ipec Group, one of the leading Slovak project management and real estate developers, works closely with Austrian firms, and currently manages the Senec Cargo Center project in cooperation with the Austrian firm UBM Realitätenentwicklung AG. A "Senec Shopping Village" will also be part of the logistics and commercial complex, which occupies 100 hectares. The companies plan to invest €250 million into the project.

Thomas Malloth, head of the Real Estate and Asset Trustees professional association of Austrian Chamber of Commerce (WKO), agreed with Čarnogurský that the benefits of cooperation for Austria were frequently understated.

"What many sceptics do not want to accept is that with all the investments that are flowing into Slovakia at the moment, Vienna is also profiting.

"Vienna is the headquarters of many international concerns, in part because of the proximity of the new EU markets. The growing international interest in Slovakia in particular ensures that Vienna will be a preferred headquarters for a long time. For us real estate trustees, that means as much movement in the office sector as in the residential sector."

However, Ivan Čarnogurský Sr, president of the Industrial Entrepreneurs' Association in Slovakia, said that cooperation between Vienna and Bratislava was still rather sporadic.

"Many [Austrian companies] have invested in Slovakia, and we have helped them run their daughter companies or joint ventures with ownership participation. But there are still great reserves for doing mutual business in the machinery and food sectors, the electro industry and construction."

Over the past few months, Vienna Airport has been in pursuit of a stake in Bratislava Airport, while Austrian firms have also shown interest in buying the Cargo Slovakia rail company.

The TwoOne consortium, involving Flughafen Wien, the Slovak Penta Group and the Austrian Raiffeisen Zentralbank, was named the winner of the tender for a majority stake in Bratislava Airport by a privatization commission earlier in January, a decision confirmed by government.

Rail Cargo Austria with the Slovak J&T Finance Group is one of the final three bidders for a 100-percent stake in Cargo Slovakia. The results of the privatization, one of the last major sell-offs by the current Slovak government, should be known by the end of March.

Specific results (projects) of the partnership