ON THE DAY of his birth, January 27, Austria celebrated the musical genius, Wofgang Amadeus Mozart, in grand style. Salzburg and Vienna, the cities most closely associated with the composer, reverberated to the sound of the maestro's works in opera and concert halls, churches and on the street. 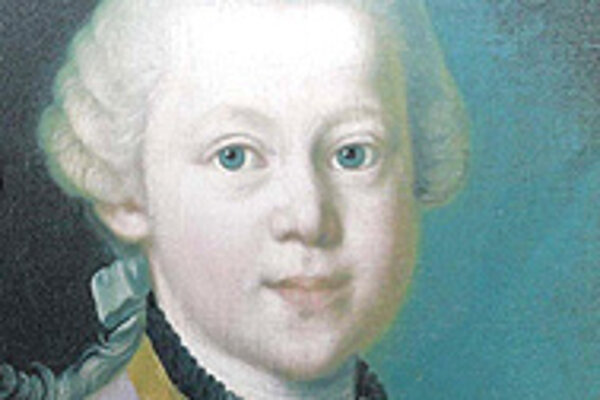 Font size:A-|A+  Comments disabled
ON THE DAY of his birth, January 27, Austria celebrated the musical genius, Wofgang Amadeus Mozart, in grand style. Salzburg and Vienna, the cities most closely associated with the composer, reverberated to the sound of the maestro's works in opera and concert halls, churches and on the street.

The entire world is joining Austria in marking the 250th anniversary of the greatest composer of the Classical Age in yearlong celebrations - The Year of Mozart.

"The anniversary is an occasion to linger intensively over his personality," said Susanne Ranetzky, director of Austrian Cultural Forum.

The Forum, along with Bratislava's Mozart Community and local as well as foreign institutions bring the genius to Slovaks. The composer's works and lectures on his miraculous talent make up a substantial part of this year's cultural programme.

In mid-January the 9th annual Mozart Week started. Running until March 26, the event offers concerts, lectures, a film and an exhibition.

"It's called Mozart Week [after a similar event in Salzburg] even though it runs for a few months. It's because its programme is richer this year," Pavol Polák, president of the Mozart Community, which is a member of the International Foundation Mozarteum in Salzburg, told The Slovak Spectator.

The festival brings famous as well as lesser-known works from Mozart's abundant repertoire to Slovak ears. Last week it premiered in Slovakia the composer's Serenade in B Major (Gran Partita), K 361, a work for 12 brass instruments and contrabass. "It's one of the best," Polák said.

Throughout February, Mozart Week invites the leading Škampovo Kvarteto from the Czech Republic to play Mozart's string quartets and Austrian Professor Otto Biba to lecture on "Mozart's way of composing". The Klassische Kapelle Wien, members of the Vienna Philharmonic, will close the festival.

Austrian Cultural Forums around the world, Ranetzky says, are celebrating Mozart's anniversary. The Cultural Forum in Bratislava offers a rich yearlong medley of thematic events - All Around Mozart. The title embraces exhibitions, film screenings, afternoon concerts, lectures and other events. It invites Slovak as well as Austrian artists to perform the composer's works and in summer plans to transport a bit of the spirit of Mozart from Vienna, within Wienmozart 2006. Vienna was the place that best stimulated the composer's creative talents.

Altogether, Mozart visited and stayed in around 200 European towns. "Europe and the entire world is looking for and visiting him now," the Austrian Cultural Forum's director Ranetzky said.

She added that Mozart is celebrated in Slovakia and around the world every year.

"We celebrate Mozart in Slovakia each year with the Bratislava Mozart Community and other foreign as well as local cultural institutions. When we look at it this way, Mozart is ever-present in Slovakia, this year obviously a bit more intensively," Ranetzky said.

It would be impossible to list all the events that Austria and Slovakia are offering within The Year of Mozart. Susanne Ranetzkyof the Austrian Cultural Forum helped select several highlights for Spectator readers.

Mozarthaus, the only building with a preserved apartment of the composer's, opened to visitors on January 27 following extensive reconstruction.
Info: www.mozarthausvienna.at.
Albertina hosts a large exhibition, Mozart-Experiment Aufklärung. I
Info: www.albertina.at.
Theater an der Wienstages around 80 opera performances by Mozart from January to December 2006, under the baton of conductors such as Nikolaus Harnoncourt, Daniel Harding, Fabio Luisi, Seiji Ozawa and Bertrand de Billy.
Info: www.theater-wien.at.

The city festival will present the entire dramatic oeuvre of the composer - 22 operas, including early works and fragments. Many organizers, such as the International Foundation Mozarteum, prepare events featuring the Best of Mozart. More info on Salzburg's Mozart-Mania can be found on the city's web pages.

The Mozart Hall of the Austrian Embassy and Cultural Forum's gallery(Ventúrska 10 and Zelená 7) run exhibitions on the life and work of W A Mozart. The Mozart hall also invites musicians - pianists Susanna Artz (Feb 23), Margarete Babinsky (Mar 14), Markus Prause (Mar 16) from Vienna and Elena Letňanová (May 18) from Slovakia - to perform the composer's works. Historian Otto Biba (Feb 27) and Zuzana Vitálová (Mar 16) will hold lectures. The Forum will publish the next part of the programme in the summer.

Within the Mozart Week festival, the Slovak Philharmonic Orchestra and Choir, conducted by Austrian Theodor Guschlbauer will play three of Mozart's works, including his early work Thamos, King of Egypt(K 345) at the Philharmonic on Feb 9 and 10. A performance of The Magic Flute, directed by Jozef Bednárik (in German), will take place at the Bratislava Puppet Theatre at Dunajská 36 on Feb 17. The Škampa Quartet and the Bratislava Chamber Soloists will perform at the Primate's Palace on Feb 26 and Mar 19, respectively. Klassiche Kapelle Wien plays in the Philharmonic on Mar 26.

The Slovak National Operawill premiere the Marriage of Figaroin June within the International Music Theatre festival, which also hosts the progressive Neue Oper Wien with The Magic Flute.

Košice and Bratislavawill also reverberate with Mozart's works during their annual Musical Festivals that run in May and September/October, respectively. The Slovak Sinfonietta of Žilina, which specializes in Mozart's music, will also perform his works.