AN EVIL-eyed self-portrait by Bohumil Kubišta, a cubistic Hradčany castle from Emil Filla and a nostalgic accordionist by Josef Čapek are only a few of the highlights that the Bratislava City Gallery (GMB) is now offering its visitors. 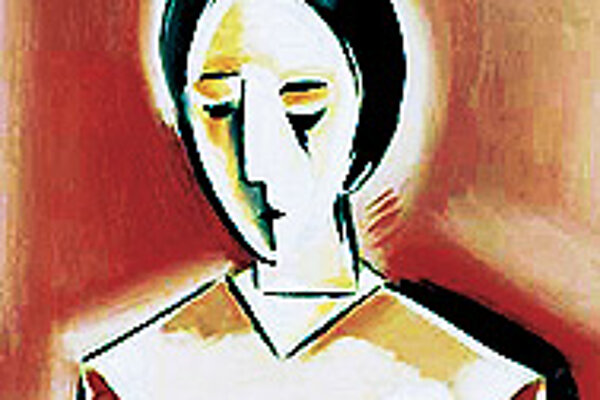 Font size:A-|A+  Comments disabled
AN EVIL-eyed self-portrait by Bohumil Kubišta, a cubistic Hradčany castle from Emil Filla and a nostalgic accordionist by Josef Čapek are only a few of the highlights that the Bratislava City Gallery (GMB) is now offering its visitors.

The second floor of the gallery's Pálffy Palace is dedicated to the works of Czech artists active from 1907 to 1939. The selection includes painters such as Josef Čapek, Rudolf Kremlička, Emil Filla, Bohumil Kubišta, Josef Šíma, Toyen, and Jan Zrzavý.

"This was a period, when Czech artists had direct contact with Paris and reacted to the latest trends in the European art of that time," said Bratislava City Gallery director Ivan Jančár.

For Ludvík Ševeček, the director of the Regional Gallery of Fine Arts in Zlín, the Czech part of the exhibition is

the fulfilment of one of his dreams. It contains 67 paintings by 21 artists, which come from the Zlín regional gallery and Prague's Czech Museum of Fine Arts. Both galleries had to cancel their permanent exhibitions so they could bring the highlights of their collections to Bratislava.

Zlín contributed a collection of paintings by the generation known as the founders of Czech modern art, in particular representatives of expressionism and cubism before World War I. Prague's collection focuses on the interwar avant-garde and surrealism movements.

"Abstract compositions by Miloš Boria are among the discoveries of the last century. Excellent works, while the artist died in 1930 forgotten and poor," said Ševeček.

The exhibition's Slovak section offers paintings from 1913 to 1945. They are from the collections of galleries located in the Morava region of the Czech Republic and include works by Jakub Bauernfreund, Andrej Nemeš, Martin Benka, Cyprián Majerník, Miloš A Bazovský, Ľudovít Fulla and others.

The paintings are being exhibited for the first time in Slovakia. Many of the Slovak artists studied in Prague and later lived and painted in what is today the Czech Republic.

"When browsing in the Moravian galleries it was a great surprise for me to find out how many excellent works by Slovak artists are there," said the GMB's Jančár, who curated the Slovak part of the exhibition.

Jančár highlighted works by Andrej Nemes and Jakub Bauernfreund. Because both escaped fascism by fleeing abroad, Nemes to Sweden and Bauernfreund to Great Britain, their works are unknown in Slovakia.

Former Czechoslovak tennis legend, Jan Kukal, who began to organize art events after his sporting career ended, pointed to a painting called Group, by Cyprián Majerník, as his highlight of the exhibition. The painting depicts

two shepherds in optimistic mood, in contrast to the nostalgia and melancholy depicted in Majerník's later works. Even though the painting resembles pieces by Marc Chagall, Kukal says, its theme is evidently Slovak.

The name of the exhibition, Gems of Czech and Slovak Modern Art, is accurate. The displayed paintings would fetch several millions at auction. "However, the best works are the property of the galleries. Thus the prices are only informative," said Jančár.

The vacant walls of the Czech galleries that supplied the works for the exhibition have been filled with modern "gems" from leading Slovak galleries.

What:Gems of Czech and Slovak Modern Art - collections from Czech galleries.
When:Tuesdays to Sundays from 10:00 to 18:00 until April 9.
Where:Galéria mesta Bratislavy (Bratislava City Gallery), Pálffy Palace at Panská 19.
After Bratislava, the exhibition will move to Trenčín, where it will run at the MA Bazovský Gallerybetween April 21 and June 25.