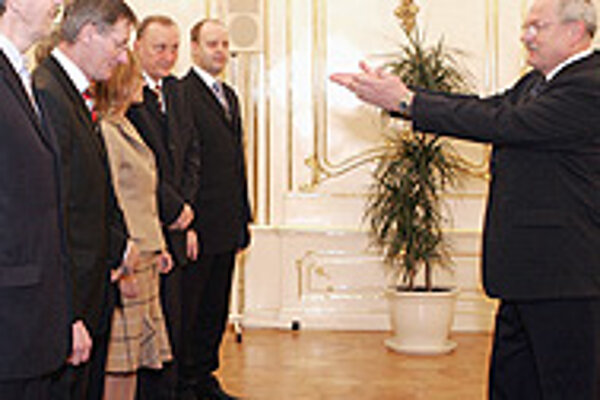 The Act on Early Elections was passed with the support of all 143 MPs present in the 150-seat legislature. It was approved in accelerated proceedings within a single day, part of a rapid series of dramatic events that have hit the country since the beginning of February.

A quarrel between the conservative KDH and Prime Minister Dzurinda's neo-liberal Slovak Democratic and Christian Union (SDKÚ) over a treaty with the Vatican quickly escalated into the KDH's decision to abandon the government.

After the SDKÚ announced it would not meet the KDH's demands, the latter party withdrew its three nominees from the cabinet on February 7, while KDH Chairman Pavol Hrušovský stepped down as speaker of parliament (see related story on page 2).

Dzurinda quickly found replacements for the departed ministers, but agreed that early elections were preferable to trying to ride out the full government term to September with a caretaker cabinet.The proximate cause of the ruling coalition crisis was a draft Objection of Conscience Treaty between Slovakia and the Holy See that the KDH claimed it had been promised would be passed. At the last moment the SDKÚ blocked its submission to cabinet.

While the treaty was among the KDH's dearest political ambitions, political analysts were surprised by the party's resolute response to being defied.

Miroslav Kusý, a political scientist with Bratislava's Comenius University, said that "emotions seem to have conquered common sense" within the KDH.

However, the KDH's Hrušovský said his party felt betrayed by how the SDKÚ and Dzurinda had handled the Vatican Treaty, which he claimed was part of the government programme from 2002.

"The KDH will not be a part of a government that is led by a perfidious person," he said at a February 7 press conference.

After the KDH ministers resigned, Dzurinda and his remaining ruling coalition partners - the Hungarian Coalition Party (SMK) and a group of ANO party defectors led by Ľubomír Lintner - agreed to propose to other parliamentary parties that early elections be held on June 17. The government approved the proposal a day later.

The opposition Movement for a Democratic Slovakia said it would support the motion, which needed a two-thirds majority to be approved, as long as all privatization sales that had not been completed by this time were halted.

Opposition Smer leader Robert Fico was also in favour of early elections, saying that if parliament could not agree on the issue, Smer would try to have the PM recalled in parliament, triggering early elections in any event. The KDH promised to support Dzurinda's recall.

The speed and dexterity with which the recent changes, including the replacement of the KDH ministers, were handled by Dzurinda aroused the suspicion that the whole conflict over the Vatican Treaty had been planned in advance.

"Political parties in general, not just the SDKÚ, have been monitoring the mood of the public for some time now. The prime minister is known to put great stock in public opinion polls, and has proven rather clever in using public topics to his advantage," said Darina Malová, a political scientist with Comenius University in Bratislava.

Malová speculated that Dzurinda had used the Vatican Treaty to boost support for his party by spooking the SDKÚ's neo-con voter base with the document's religious conservatism.

"The ultimatum issued by the KDH opened up new possibilities for the prime minister. In addition, Dzurinda was looking for an election topic. The SDKÚ's old themes such as [Western] integration and anti-Mečiarism no longer apply," Malová said.

With relatively low voter support of around eight percent, the SDKÚ is in the hunt for more neo-liberal voters, a sector where it could win back support it lost in the past four years to the Free Forum and Pavol Rusko's ANO, as well as "those Catholics who are more liberal on practical matters than the Church", according to Malová.

"The prime minister apparently reasoned that this was the right time for early elections, and that it was the best solution in the given situation. After all, the idea of early elections is not new to any of the ruling parties. Although it has been predominantly the agenda of the opposition Smer, both the SMK and the KDH have raised the possibility in the past," Kusý said.

The political scientist dismissed the Vatican Treaty as "a relatively old issue", and said there was "no reason to make such a scandal out of it".

Kusý argued that from the start, both the SDKÚ and the KDH had deliberately escalated matters in order to secure early elections.

"Elections are behind everything, along with the mutual desire [of the SDKÚ and KDH] to free their hands and forge new alliances [with political parties]. For some time now, for instance, the KDH has flirted with the idea of cooperating with Smer. This is a suitable opportunity for them to start forging initial ties," Kusý said.

Sociologist Pavel Haulík from the MVK agency noted, however, that the KDH had also signalled it might still consider working with the SDKÚ in future.

"We heard the KDH say it might start differentiating between Dzurinda and the SDKÚ," Haulík said, referring to a recent interview in the SME daily with the KDH's deputy chairman, Vladimír Palko.

Palko said that the KDH might consider working with the SDKÚ while rejecting its leader, just as ruling coalition parties in the past have painted the opposition HZDS as acceptable, but without its authoritarian leader, Vladimír Mečiar.

The analysts agreed that in terms of programme achievements the right-wing government has done enough, and that it was very unlikely any further major changes would occur.

"The principal reforms were carried out, and it's good that they were, but even if they had stayed together the coalition parties would not have had time to do much more before September," said Malová.

"The situation is far less dramatic than it seems," Haulík said. "Slovakia has entered a pre-election period."