THE POLITICAL turbulence and the subsequent collapse of the ruling coalition earlier in February shocked the forex market and took a toll on the Slovak currency, which after hitting record strengths last year started to roll downhill. 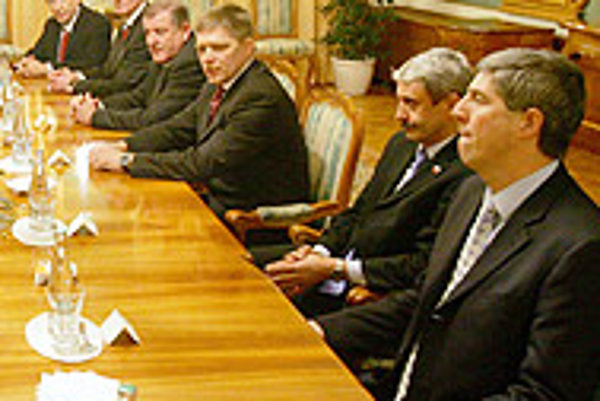 Font size:A-|A+0
THE POLITICAL turbulence and the subsequent collapse of the ruling coalition earlier in February shocked the forex market and took a toll on the Slovak currency, which after hitting record strengths last year started to roll downhill.

In the first 72 hours after the Christian Democrats announced their departure from the ruling coalition on February 6, the Slovak currency lost 40 basis points to SKK37.70 against the euro, its reference currency.

However, the central bank said that the crown would stabilize once the political temperature dropped.

National Bank of Slovakia Governor Ivan Šramko said on February 8 that the sudden dip in the strength of the crown would likely not continue.

"As soon as the proposed political solution [early elections] is approved, the exchange rate will not show high volatility and should remain stable," Šramko said.

Parliament approved early elections in a unanimous vote on February 9.

The NBS has said it will refrain from commenting further on the development of the currency's exchange rate, a standard practice in countries that have joined the ERM II mechanism for adopting the single European currency.

Slovakia tied the crown to the euro and entered the Exchange Rate Mechanism on November 25, seven months earlier than planned. The crown was pegged at the prevailing market exchange rate of SKK38.455 to the euro, and is allowed to fluctuate in a band of plus or minus 15 percent.

The Standard & Poor's rating agency has already said that the departure of the Christian Democrats from the ruling coalition, which triggered the shortening of the government's term, would not have an immediate impact on Slovakia's sovereign credit ratings, which remain at 'A' with a stable outlook.

The agency said that Slovakia's stable outlook, which was assigned when its long-term ratings were raised to 'A' from 'A-' in December 2005, still accurately reflects the balance between upside and downside risks to the ratings.

According to the agency, Slovakia continues to make good progress towards joining the Eurozone by 2009, and that a resumption of reform-oriented policies and fiscal tightening would lead to further improvements in the ratings.

"Conversely, if the results of the upcoming general elections were to lead to a policy reversal, an expansionary fiscal stance, or a postponement of accession to the Eurozone, this would lead to downward pressure on the ratings," Standard & Poor's wrote in a statement for The Slovak Spectator.

Financial analysts said that the prospect of early elections could help calm the market.

Zdenko Štefanides, the chief economist of the VÚB Bank, said that Prime Minister Mikuláš Dzurinda had originally faced two options: Either to seek early elections, or to hold on until regular September elections and risk losing popularity by arranging ad hoc support from the opposition.

"Early elections in June were the better choice for the markets. The alternative of a very weak minority government dragging on until September would only have prolonged the pre-election uncertainty, which hurts the markets and investor confidence.

"In the short term the crown may continue to be affected by politics, but in the long term we expect a resumption of appreciation from the koruna," Štefanides told The Slovak Spectator.

"The political tumult and the resulting pause in the appreciation of the koruna may have increased the likelihood of an increase in official interest rates, but the central bank has been signalling that it will tighten monetary policy for some time," he added.

Miroslav Šmál, an analyst with Poštová banka, said that while the coalition crisis and early elections had taken the market by surprise, no radical or long-term weakening of the crown should be expected.

"I don't expect that the long-term appreciation of the Slovak currency will be reversed. However, until early elections are held and the first results are known, the market cannot really expect any records from the Slovak currency," Šmál told The Slovak Spectator.

The analyst said he felt the crown might stabilize at Sk38 to the euro.

"A strong crown can moderate inflation, which at the moment is a very important indicator for Slovakia. It's one of the Maastricht criteria that Slovakia has to meet in order to adopt the euro," he explained.

However, analysts agree that market players are most interested in seeing the economic policies of the new government.

"Bringing elections forward by three months will have no real impact on the underlying economic development of this country. The economic policies of the new government will be far more important," Štefanides concluded.

"All that has happened is that we will learn about them three months earlier than scheduled."