IN 1939, her first son died. A decade later, she suffered several bouts of depression and her legs had to be amputated because of severe diabetes. Then, at the age of 52, she started drawing. Anna Zemánková, who was of Moravian origin, got up every morning in her Prague apartment at 4:00 and drew until 7:00. Slowly, her world filled with drawings of flowers and plants. 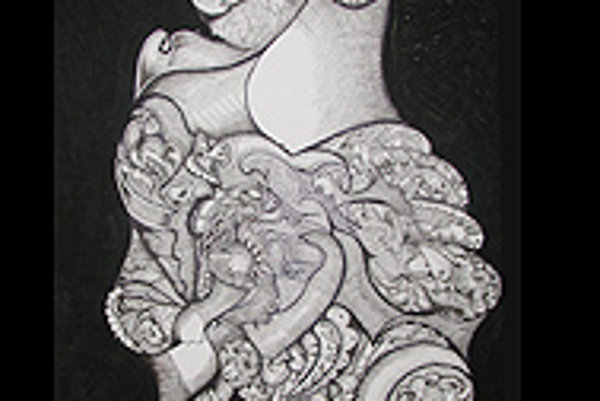 Font size:A-|A+  Comments disabled
IN 1939, her first son died. A decade later, she suffered several bouts of depression and her legs had to be amputated because of severe diabetes. Then, at the age of 52, she started drawing. Anna Zemánková, who was of Moravian origin, got up every morning in her Prague apartment at 4:00 and drew until 7:00. Slowly, her world filled with drawings of flowers and plants.

The son of Eva Droppová, a Slovak of German-Hungarian descent, was the victim of a major accident in 1991. He underwent surgery but remained neurologically impaired. His mother was emotionally scarred by the tragedy. A graduate of engineering studies, she made a desperate plea to God and, within seconds, her hand, almost uncontrollably, started to produce pictures, which today number in the thousands.

The imaginative worlds of these two women are now being shown at Bratislava's X Gallery, in an exhibit titled Magic Visions. Slovak Eva Droppová and Czech Anna Zemánková, untrained artists, represent the so-called Art Brut, or raw art. French artist Jean Dubuffet created the label to describe art made outside the boundaries of official culture, often by people who have stories to tell.

Anna Zemánková's grand-daughter (Anna died in 1986), Terezie, pulled out the two women from a group of Art Brut exponents exhibiting joint projects across Europe. She wanted to highlight the style's uniqueness of the two.

"I have long desired to bring them together into one exhibition. I feel a certain spiritual affinity that connects them in artistic form, as well as in creative motivation; the automatic impulses that initiate their creativity," said Terezie, chairwoman of the Prague's board of abcd (art brut connaissance & diffusion), a French foundation with international scope that researches and promotes Art Brut.

Zemánková and Droppová began drawing at a similar age, after painful life experiences. Both got "addicted" to drawing, which became a necessity of life. The results on the paper come from something within them, and similarly, their styles have gradually developed.

Zemánková, her grand-daughter explains, though she felt something inside, lacked the clarity of Droppová, who managed to channel the "language" of her inner voice into her art.

"I was so destroyed when I learnt there was nothing more I could do for my son," Droppová recalled vividly. "I cried and paced through the flat. Then I suddenly kneeled down, put my hands together and asked God why He was punishing my child. I told Him to transfer everything onto me, as I was strong and could bear it all.

"It was the first time I had even spoken to God. And then, something hit the room. It was like thunder. The flowers hanging down from shelves stood up as if magnetized. Then I heard myself saying: 'Yes, I will write a book that God exists'."

She wrote the book and also bought pencils for her son to draw with while in hospital. As she was contemplating what was happening around her, she began to draw lines, which later acquired shapes. From then on, she regretted every day she did not draw.

"My brain switches off and my soul starts to work," Droppová says. She can, for instance, create while she cooks goulash and thinks of what ingredients to add. The brain is occupied by something completely different and the "creativity" works on its own.

Strangely, it also stops on its own. Droppová says Art Brut has to be done in one sitting. In her first drawings (the smallest at the exhibition), she sat with them until she was completely finished. "If I didn't do the work in one sitting, I couldn't go back to it."

With her later works, she got more relaxed. She can interrupt the work process and return to it later, as well as play with its final touches. However, the basic outline must be always done at once, in a whole.

Droppová's works are full of symbolic religious messages. She can read them once the work is finished, but had to learn how.

"I feel something that there is something very deep and very honest inside of me that has to be made public."

Art Brut's largest permanent exhibition is in Lausanne, Switzerland. It was assembled by French artist Jean Dubuffet, who coined the term "Art Brut" and was the first to hail the merit of the work done by untrained individuals not under the influence of other art forms. Several smaller collections of this "outsider art" can be found around Europe. Terezie Zemánková from abcd Prague plans to put together an exhibition of abcd's collection (www.abcd-artbrut.org) to run from June to September this year at Dům u Kamenného Zvonu Gallery, Prague. It will include the work of the two exhibiting women.