IT IS IMPOSSIBLE to spend more than a few months in Slovakia without noticing tough-looking men in bomber jackets racing around in cars labelled zásahové vozidlo (response vehicle) and patrolling the entrances of pubs, grocery stores, sports facilities, commercial premises and government ministries. 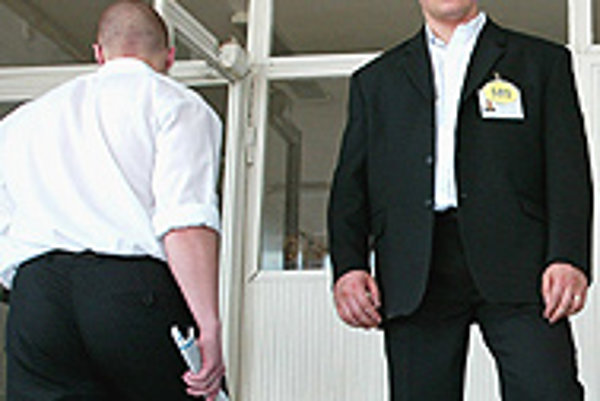 Slovakia's private security services (súkromné bezpečnostné služby, SBS) have become as much a part of modern Slovak life as financial groups and pyramid schemes. With a total workforce of between 20,000 and 25,000, they are also as large an employer as the country's professional army or its police corps.

At the same time, in their strength and ubiquitous presence, security firms have attracted a strong organized crime element. Mob-related SBS companies, while only a fraction of the total security firms on the market, have equipped Slovakia's underworld bosses with a small army of extortionists licensed to carry guns.

But this year, if the police get their way, Slovakia's security firms will have to give up either their mafia connections or their operating licenses.

As of January 1, police have been entitled to strip any SBS suspected of involvement with organized crime of its operating license. No hard evidence is necessary - it's enough that a special police commission, operating on information from the Slovak intelligence service (SIS), believes a company is dirty.

This provision, along with a shopping list of new bureaucratic requirements, has infuriated SBS companies, many of whom complain they are being penalized for the faults of the few.

Until the new law came into force, people in the security consulting business, for example, could offer services with only a basic professional certificate, and were not required even to have finished elementary school.

"This created room for the fictitious provision of security consulting services for a certain fee (otherwise known as extortion)," the Interior Ministry wrote in its explanatory preface to the new law.

Now, security consultants will have to have university degrees in law or the security field, and will have to provide proof of their "integrity" and "reliability" - code words in the new law for having a clean record and no contacts with organized crime.

The act also requires people operating and working for security services to prove their integrity and reliability, and to obtain a slate of medical, psychological and professional approvals and certificates.

The requirements have dismayed many SBS companies, who say it will complicate their survival in an already competitive market.

"We were having problems finding enough people to do this kind of work before, but now, with the new stricter conditions, recruiting is even more difficult," said Martin Schon, commercial director of the Securiton Slovakia company.

"It has increased our costs threefold," said Anton Tománek of SBS Bonul in Nitra.

But the police are adamant that the law is crucial to their fight against the criminal underworld.

"Security companies are an integral part of organized crime," said police corps vice-president Jaroslav Spišiak in an interview with The Slovak Spectator on February 14.

"Despite the fact that some entrepreneurs in the security service sector believe that this law was created against them, the truth is that we created the law to protect society as a whole from the abuse of security companies... The key is to what extent society is prepared to tolerate strict laws, knowing that they may infringe somewhat on personal freedoms, but knowing also that they are in the service of the state's fight against criminals."

Perhaps the most Draconian provision is paragraph 14 on "reliability", which says that a company can lose its license if it employs someone who has been charged with a crime - which critics say violates the presumption of innocence principle - or if they are "unable to guarantee that in the performance of their duties they will obey the law and all relevant guidelines".

A special commission has been set up to judge such matters, including members of the organized crime squad and security experts; its decisions are binding on the regional police headquarters, which issues security licenses, and while they can be appealed, they cannot be stayed.

Spišiak said the police had yet to take the license of an SBS company this year, but that this, too, would come as they battled more sophisticated forms of organized crime.

"It's no longer like it was at the beginning of the 1990s, when the heads of mafia groups had security companies and even named them after themselves," he said.

Indeed, among Slovakia's 1,500 security companies are some rather obvious references to their strong-man owners.

The PER security company, for example, took the first letters of the Christian names of owners Pavol Cako and brothers Eduard and Robert Dinič. The latter two, leading Bratislava mobsters in their day, were murdered in 1998.

The OŽ Tatry security company, likewise, was founded by Ondrej Žemba, reputedly the boss of Poprad territory, while TIMO belonged to Tibor Pápay and Monika Bokorová. The former, a mob boss from south Slovakia, was gunned down in Dunajská Streda in 1999 with eight of his underworld accomplices, which remains the largest mass murder in Slovak history.

But times have changed since the violent and extravagant youth of organized crime in Slovakia.

"Now they have erudite lawyers, and plenty of legal representatives who meet all of the conditions of reliability and professional qualifications and clean record and so on," said Spišiak.

It is precisely the greater sophistication of organized crime in Slovakia, one security company manager said, that makes it unlikely the law will be effective.

The manager spoke on condition of anonymity, saying he did not wish to antagonize his state supervisors.

"It's not a problem to put people in public positions who are clean, as the new law requires, and yet to conceal the people who are really behind the operation," he said.

"Meanwhile, expenses for the new training certificate, the doctor's clearance, the psychologist's evaluation, and the various fees for criminal record printouts mean that new SBS employees basically don't even see their first paycheck."

The manager works for an SBS company whose owner was on a list of people with contacts to organized crime leaked from the police last summer. However, he said he feared the economic impact of the law far more than the prospect of losing his license on an organized crime charge.

"These mafia accusations in Slovakia are like old wives' tales," he said. "There is a lot of jealousy within the police regarding people like my owner who left [the force] and have been successful.

"Meanwhile, every time the law was amended since 1998 we were required to change the information on our SBS ID cards, which meant printing new cards; since January 1 instructors have not been able to hold new courses because the ministry has not issued guidelines for them; and we even have to repaint all of our cars, because the ministry decided the label "zásahové vozidlo" must be in black letters on a white background.

"The law is the law, and we have to follow it, but this is harassment, plain and simple. I think it was a case of the ministry creating legislation without input from anyone with real experience of the industry."

Spišiak admitted that the reaction from the SBS community so far has been overwhelmingly negative, but said the gravity of the illness necessitated a radical cure.

"It makes us very unhappy that the stricter we make the laws in this area, the more harm we do to people who want to offer legal security services," he said. "But we have no other way of eliminating the organized crime element in the security sector besides making conditions tougher."