Hockey campaign off to flying start

CONVINCING wins over Russia and Latvia, and some dazzling play by speedy winger Marián Gáborík and team captain Pavol Demitra, saw the Slovak men's ice hockey team off to a fast start in the qualifying round of the Turin Winter Olympics, with games against Kazakhstan, Sweden and the US still to be played as The Slovak Spectator went to print. 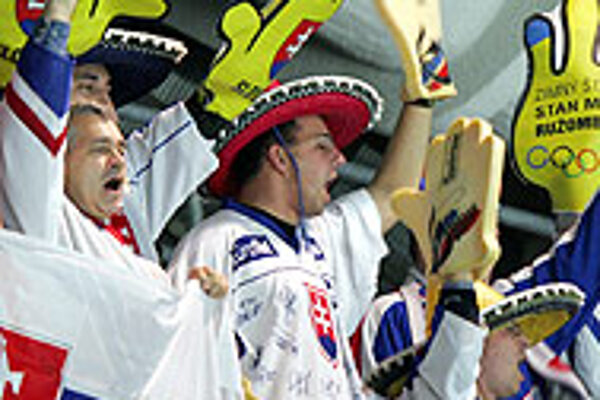 Font size:A-|A+  Comments disabled
CONVINCING wins over Russia and Latvia, and some dazzling play by speedy winger Marián Gáborík and team captain Pavol Demitra, saw the Slovak men's ice hockey team off to a fast start in the qualifying round of the Turin Winter Olympics, with games against Kazakhstan, Sweden and the US still to be played as The Slovak Spectator went to print.

Given the strength of the top seeds in the other qualifying group, including Canada and the Czech Republic, Slovakia hoped to qualify for quarterfinal play from as high a position as possible in its own group, and thereby avoid an early meeting with a superior opponent.

The game with Russia on February 15 started quickly, with little physical contact but some penetrating rushes, especially from the Slovaks, who were leading 4-2 in shots when Demitra broke into the Russian end in the tenth minute and put a perfect pass in the top left-hand corner.

Less than a minute later, Pavel Datsyuk tied it up for Russia off a face-off in the Slovak end, followed in the 13th minute by Russian captain Alexej Kovalev, who finished off a three-way passing play with a snap shot past Slovak goaltender Peter Budaj's left pad.

Budaj was a surprise start instead of Slovak regular netminder Ján Lašák, but turned in a solid performance and gave Slovakia hope that its perennial weakness in goal might finally have been solved.

The second period began at an equally fast tempo, but Slovakia's speed began to show as the Russians were forced to take several penalties to slow them down. With Darius Kasparaitis off for holding, Slovak defenseman Ľubomír Višňovský banked a slapshot in off the right-hand goalpost at 5:51, while less than a minute later winger Marek Svatoš was hauled down on a breakaway, resulting in another Slovak powerplay. Russian defenseman Vitalij Vishnevskij provided one of the uglier moments of the game when he appeared to be trying to catch the knee of a speeding Gáborík.

But with the lack of physical play, neither team was able to take command of the game, a situation the Canadian officials seemed happy to promote. Defenseman Andrej Meszároš was called for boarding on an innocent-looking play, and 11 seconds later, Alexander Ovechkin deflected in a screen shot from the point, putting Russia ahead 3-2.

Slovakia refused to give up, however, and with the Russians again shorthanded following some heavy Slovak pressure, veteran winger Peter Bondra poked home a rebound off a Miroslav Šatan slapshot that eluded Russian goaltender Ilja Bryzgalov.

The teams went into the third period tied 3-3, despite a two-man advantage for the Slovaks that they never looked like exploiting.

The teams were evenly matched in the final 20 minutes, and penalties continued to dictate the pace, with Slovakia's Richard Zedník picking up his fourth minor, and Vishnevskij finally being called for a penalty he had coming to him all night.

The difference proved to be the goaltending of Budaj, who made some big saves, particularly a pair in close with five minutes left and Slovakia ahead on shots 34-18.

Budaj's efforts gave Marián Gáborík a chance to break away down the right wing. A Russian defenseman started with about 10 meters to spare on the speedy Slovak forward, but by the time Gáborík released a low shot beating Bryzgalov to the stick side, the Russian was no longer part of the play. Slovakia was up 4-3 with less than four minutes in the game.

Two minutes later, with the Russians pressing, Gáborík repeated the feat, this time from the left side, blowing past the Russian defenders and snapping a shot over Bryzgalov's shoulder. Slovakia held on for the final seconds to beat Russia 5-3 and take second place in their group behind Sweden.

"It was a great beginning," said Demitra. "Budaj played well, and Gáborík scored some clutch goals. This is a very strong team, and I'm very happy to see that the younger players have meshed so well with the established regulars."

Less than 24 hours later, in a matchup against Latvia, Slovakia improved their record by defeating the Baltic team 6-3 despite moments of tension.

After efforts by Zedník, Robert Petrovický, Demitra and Marián Hossa put Slovakia up 4-1, the Latvians mounted an improbable comeback in the second period that peaked at 4-3 and Slovakia shorthanded.

But an answering score by Zdeno Chára, and a textbook goal by Hossa in the third on a two-on-one with Gáborík, put the game away.

Hossa finished with two goals and two assists, while Ján Lašák, starting in goal instead of Budaj, made some spectacular saves to keep his name in contention for the No 1 goaltending spot.

With Sweden losing to Russia, Slovakia moved into first place in the standings on the win.