COUNTRY music legend Johnny Cash didn't have a great voice. Neither was he a fashion trendsetter (he invariably wore black throughout most of his career). But, as a good southern boy raised on a tradition of hymnals and sermons, he was a masterful storyteller. 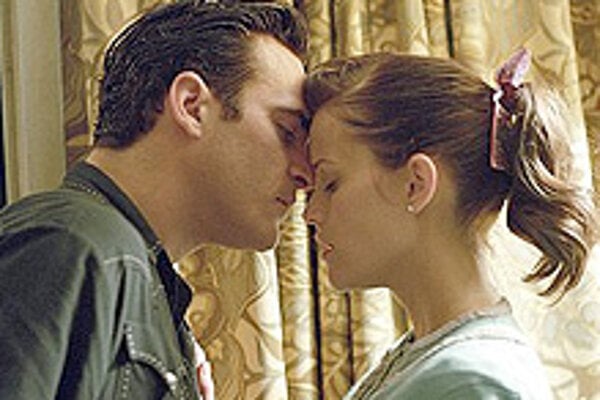 COUNTRY music legend Johnny Cash didn't have a great voice. Neither was he a fashion trendsetter (he invariably wore black throughout most of his career). But, as a good southern boy raised on a tradition of hymnals and sermons, he was a masterful storyteller.

The art of storytelling is the heart and fabric of Walk the Line, the biopic about Johnny Cash that recently earned Academy Award nominations for Best Actor and Best Actress. Rather than assume a documentary style that lingers on the details, as befell last year's tedious Ray, co-screenwriter/director James Mangold wisely stuck to the issues that forged Cash's character: the death of his older brother, his pill and alcohol addiction, and his love for fellow country singer June Carter.

And all these issues shape the heartfelt honesty of Cash's enduring music. In one pivotal scene, Johnny sings an old gospel song for Sam Phillips (Dallas Roberts), the head of a Memphis recording studio. He moans his lines, as always, and seems a bit emotionally distant. Phillips gives him another chance, though, and, this time, Cash sings some of his own music, accomplishing the metamorphosis of John R Cash into the legendary Johnny Cash.

Joaquin Phoenix (as Johnny Cash) really nailed this scene. His eyes trembled with intensity as he dug down deep and his voice shook with emotion.

"Steady like a train, sharp like a razor," is how June Carter once described Cash's unique singing style, and Phoenix produced a very creditable imitation on such well-loved classics as Walk the Line, Ring of Fire, and Jackson.

As Cash's fame grows, his first marriage falls apart and he becomes addicted to pills. The movie's most dramatic scene happens in Las Vegas, when Cash stumbles on stage high and drunk, and breaks some stage lights before collapsing.

This could've meant the end of his career, but Carter (Reese Witherspoon) helps him defeat his inner demons. A bit of a free spirit, especially for the 1960's, Carter knew when to draw the line with Cash, and when to support him. Their chemistry in real life was legendary, and Phoenix and Witherspoon had a bright fire burning in their eyes.

With June's help, Johnny overcomes his addictions and his career takes off again, which leaves only one thing left for him to do. In the film's final major scene, Johnny proposes to June onstage during a concert. After years of refusing him, she finally accepts.

Johnny Cash and June Carter Cash were married for 35 years, and died four months apart in 2003. But rather than scattering its energies in an effort to detail Cash's entire life, the film wisely ends with the proposal.

It's like Johnny's brother, Jack, said while lying in bed under the big southern sky: "You can't help nobody if you can't tell 'em the right story."