FIVE healthy babies and one dead boy were found in the first fourteen months in Slovakia after the first baby rescue station Hniezdo záchrany (Lifesaving Nests) opened in Slovakia. 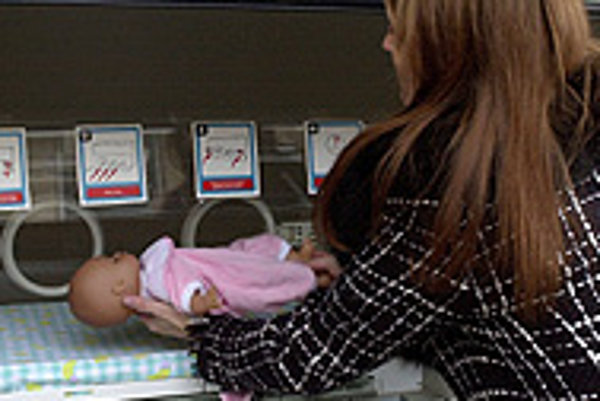 Before the baby-boxes came into existence, the country talked of around 10 abandoned dead newborns a year. Unofficially the number was believed to be 10 times higher.

"I'm very surprised at how well it functions," the initiator of the project, Anna Ghannamová told The Slovak Spectator.

When she first got the idea to establish baby-boxes in Slovakia, the ruling coalition was absorbed in discussions over the country's abortion law.

The dispute between the liberal New Citizen's Alliance (ANO) and conservative Christian Democrats (KDH) over the law allowing abortions in cases involving serious genetic conditions ended up at the Constitutional Court, where it still awaits a final verdict. Meanwhile, Ghannamová, through the Šanca pre nechcených (Chance for the Unwanted), the civic association she presides over, opened 10 baby-boxes in Slovakia. They are dispersed at hospitals from Košice to Bratislava. The last rescue station opened at the Košice Teaching Hospital of Louis Pasteur at the end of the last year.

Mothers in difficult life situations can anonymously place their newborn there, knowing that they will receive professional care. After they sort out their crises, they can come and pick them up. If the mothers fail to show up within six weeks, the baby goes straight for adoption. In Slovakia, as anywhere in the world, the waiting lists for babies are long.

The process of the rescue station is similar to that of a concealed birth, which is a standard birth-giving process, but administratively processed as a "confidential case".

However, Ghannamová learnt there of women who were frightened of giving birth in a hospital even anonymously, and established the rescue stations.

The ministries, doctors, and the Church approved of Ghannamová's efforts to stop the unnecessary infant deaths.

"The rescue stations are a very good idea. On one hand they save children's lives, and on the other it offers women in complicated life situations a highly human solution," Health Ministry spokesperson Karol Farkašovský told the Spectator.

The ministry supported the project with Sk1.5 million (€40,250). The money went to help build the centres and purchase the public incubators for the rescue stations at hospitals in Nové Zámky, Trnava and the Bratislava district of Petržalka.

Abandoning a child is considered crime in many countries. With Slovakia's Health and Justice Ministries fully supporting the concealed birth and Ghannamová's rescue stations, the Penal Code made an exception in the case.

"In the Czech Republic for example the Health Ministry rejects this activity, stating it entices [mothers] to leave their children," Ghannamová said.

The civic association Statim therefore built a baby-box at a private facility in Prague last June. It is the only baby-box in the country and on February 17 received its first baby.

A single mother who gave birth to twins placed one of them carefully wrapped there, leaving a note explaining her difficult situation in feeding both babies.

"It must have been a 'Sophie's choice'," said Ghannamová, who supported the Czech association with the know-how, even though the Czechs had come up with the idea first. "No woman finds such a decision easy."

How it began in Slovakia

The journalist Ghannamová found the idea for her project when browsing foreign magazines. "I was quite surprised when I saw that it worked in the world and wondered why it wasn't working here. My husband smiled at me and said: 'Why do you ask? Try it.' That provoked my interest," Ghannamová said.

When surfing the Internet she discovered the system had been implemented in several countries, though differently in each. The organizations involved did not share information and experience.

"Probably the first who renewed the idea of the old monasteries [when nuns took care of abandoned children, ed. note] was a Hungarian professor who established a public baby-box 12 years ago," Ghannamová said.

"He did it simply - he took an incubator from a maternity ward and placed it in the main entrance of a Budapest hospital. Then he turned the doorkeeper's chair to face the other side, so that the incoming woman and baby could not be seen. To date, 15 children have been found there."

The professor also inspired Ghannamová in a second phase of the project- solving the complex problem of unwanted pregnancy.

Baby-boxes are the primary crisis solution, she explains. Establishing centres in smaller cities and villages, or rearranging some existing facilities so that women could stay until the difficult period was over, should help them to keep their children and not abandon them. The women will make products for sale that will help the centres to earn their own money.

Entitled Náruč záchrany (Armful of Lifesaving) and subtitled Keep me, Mother!, Ghannamová plans to launch this step in two months.

On May 10, associations and individuals working with the issue will be invited to Bratislava for an international conference, and the next day a concert will open the Náruč záchrany phase.

The meeting should serve for exchanging experiences and sending the message to the European Union on establishing unified legislation on the baby-boxes.

"It's a kind of miracle that we are probably the only country which has it anchored in the law," she said.