THE CZECH national hockey team beat Slovakia 3-1 in a quarterfinal match at the Turin Winter Olympics on February 22, abruptly ending Slovakia's hopes of taking home its historic first medal from the hockey competition. 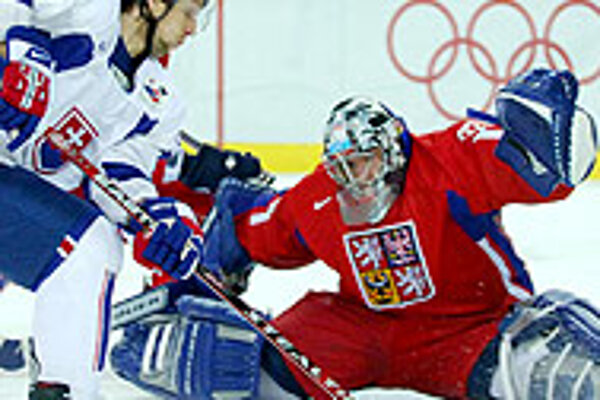 Despite winning their group in preliminary round play with a perfect record of five victories and no losses, the Slovaks were sent packing, and wondering what might have been if they, like Sweden, had taken it a bit easier in first-round play and avoided meeting the Czechs, their perennial nemesis.

True to the widespread belief that Slovak athletes have a mental block against playing well versus their former partners in the Czechoslovak federation, Slovakia came out as flat as a doormat in their sudden-death quarterfinal.

After the first period Slovakia was down 17-5 in shots to the Czechs, choosing an inexplicably defensive style of play that was complicated by defensive errors.

In the 13th minute, during a Slovak powerplay, Martin Ručinský intercepted a foolish pass by Slovak winger Miroslav Šatan and scored on a breakaway, putting the puck between goalie Peter Budaj's legs. In the 29th minute, Milan Hejduk increased the score to 2-0 as the Slovak defenders left him alone in front of Budaj.

The Slovaks came to life briefly in the third period, with speedy winger Marián Gáborík scoring in the 44th minute, but in the end the Slovaks came up far short.

After the Slovaks pulled Budaj in the last minute of play to give themselves the man advantage, Martin Straka sealed the Slovak defeat with an empty-net goal.

"It's hard to say where we went wrong. We didn't handle the match. But it's only a game, life goes on. The Czechs played very well, and they demonstrated [the skill] we have shown at the tournament so far," forward Peter Bondra told the daily Pravda.

"We dreamed of winning a medal. Maybe we wanted it too much. We should have relaxed a bit and maybe we would have played better," Bondra added.