WHEN folk ensemble Lúčnica threw a grandiose celebration for its 55th anniversary in 2003, 36 current and former members of its orchestra gathered to play for the show. Seeing these fine musicians, many of whom are soloists with the country's top ensembles, including the Slovak Philharmonic, reunited gave birth to a new idea: the 55-member Golden Violin orchestra. 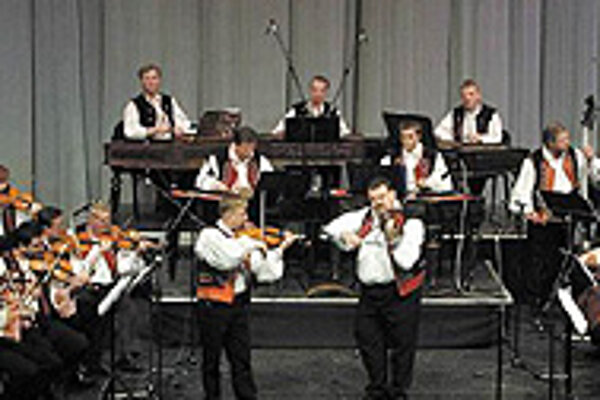 WHEN folk ensemble Lúčnica threw a grandiose celebration for its 55th anniversary in 2003, 36 current and former members of its orchestra gathered to play for the show. Seeing these fine musicians, many of whom are soloists with the country's top ensembles, including the Slovak Philharmonic, reunited gave birth to a new idea: the 55-member Golden Violin orchestra.

The Golden Violin premiered the next year, full of high hopes that promised a new concert would take place each March. That plan fell through last year, but is coming to fruition now.

"We have been saving our strength and money for this year's large project," said violin virtuoso Martin Sleziak, who leads the Golden Violin and its smaller version, the seven-member Golden Violin, which accompanies Lúčnica dancers and singers. He has been touring Slovakia with the smaller orchestra's two new projects.

Opera singer Miroslav Dvorský, violin virtuoso Dalibor Karvay and flute maestro Jiří Stivín will be the guests for this mega-show.

Sleziak says that if the concert meets with commercial success - so far it is the third best-selling event after the Depeche Mode concert in June and Miroslav Žbirka's current tour - the Golden Violin will want it to become a tradition with a decided theme.

"We want to introduce Slovak audiences to the Slovaks that are famous internationally," he said, explaining that some great Slovak opera soloists, such as Ľubica Vargicová, Edita Gruberova or Dalibor Jenis, seem to be better known abroad than at home.

"I don't think our country is so big that these people should be overlooked."

When mentioning international success, Sleziak clearly had Lúčnica's three successful concerts at London's Covent Garden in 2002 on his mind. Though the concerts were historic triumph for the ensemble, no Slovak media reported on it. "When they finally called, they were more interested in the theft that had occured in our stockroom around the same time."

This year's concert features two Slovaks whom Sleziak feels need introducing - Dvorský and Karvay. Opera singer Miroslav Dvorský comes from the well-known Dvorský family and earned his success on the opera stages of Hamburg, Paris, Berlin and the Vienna Staatsoper. He will sing the famous aria Nessun Dorma by Giacomo Puccini, which legendary opera singer Luciano Pavarotti opened the winter Olympics with, and the ravishing

Spanish song Granada. Karvay, 20, a rising star, will play one of the most demanding pieces ever written for violin, Franz Waxman's Carmen Fantasy, which won him the Eurovision Prize in Berlin.

"When you hear him, you will understand why Prince Charles invited him to Windsor," Sleziak said.

Karvay said he has performed with various philharmonic orchestras but never with such a large string orchestra. "It will certainly be interesting for the viewers to see so many violinists on one stage. I'm sure we will produce the right 'tone' and that they will like it," he told the Spectator.

The Golden Violin will perform Hungarian Dances by Brahms, Paganini's Capricio 24, and music by John Williams from the Schindler's List soundtrack. Jiří Stivín, a well-known Czech flautist, will also guest star and perform pieces by Vivaldi and Bach.

"Stivín is becoming a permanent partner for us. He has been with us since the start of the project and his amazing charisma thrills visitors the same as it does us," Sleziak explained.

Sleziak says that of the approximately 4,000 concertgoers expected to fill the arena, not everyone will be a music expert. Therefore, the repertoire is designed to appeal as many as possible. Karvay performs classical music, Stivín plays jazz, Dvorský sings opera arias and the Golden Violin, which has its roots in traditional music, is a maxi-folk band. They all play highly professional but at the same time popular pieces.

"Everybody in attendance will be able to find something to enjoy," Sleziak said.