FOR THE FIRST time in the history of independent Slovakia, a political party has been outlawed for its extremist ideology. 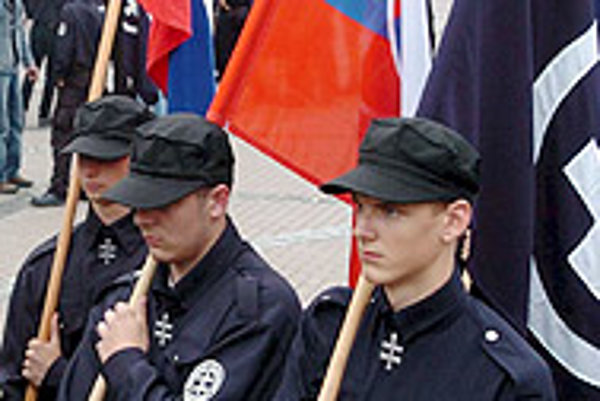 Font size:A-|A+  Comments disabled
FOR THE FIRST time in the history of independent Slovakia, a political party has been outlawed for its extremist ideology.

The Supreme Court ordered the dissolution of the ultra-nationalist Slovenská pospolitosť (Slovak Togetherness) party on March 1 based on a proposal filed by Attorney General Dobroslav Trnka. The court's verdict cannot be appealed.

Presiding judge Ida Hanzelová said the party had been banned because its programme violated the universal right to vote and run for office as protected by the Slovak constitution. The party advocates an "estate-based" society in which only the members of 10 selected groups would have the right to cast ballots and be elected.

The estate system confers a certain status or "estate" on members of various social groups, such as clergy, teachers or farmers, and has roots in Slovak and Slavic traditions.

Slovenská pospolitosť is practically without assets, so the court ordered no liquidation of holdings along with the disbanding.

The Interior Ministry said it would erase Pospolitosť from the register of political parties in Slovakia as soon as it received the court's verdict. According to the ministry, the court decision means that Pospolitosť cannot be active in any field, not just politics.

Party leader Marián Kotleba, a secondary school teacher from Banská Bystrica, said his group had been prepared for this outcome. He compared the March 1 trial to the 1950s Stalinist trials under the communist regime.

Kotleba said that regardless of the court's decision, members of his party would run in parliamentary elections in June, perhaps on the election lists of other parties.

The Pospolitosť boss also said the court had not given him a chance to defend himself.

Trnka said in October that Pospolitosť's statutes, programme and activities violated the Slovak constitution, the country's laws, and the acts and international agreements it was signatory to.

Trnka's call for the party to be banned came after a series of public meetings held by Slovenská pospolitosť in Hlohovec, Modra, Černová, and Prešov in late October.

However, the court outlawed the party based on the conflict between its programme and the constitutional rights of Slovak citizens, and did not examine expert opinions on other aspects of the party.

The party's programme says that parliamentary democracy has failed, and calls for a society based on 10 estates in which national minorities would have representation in parliament equal to that which Slovaks enjoy in their native states - in other words, none.

Members and sympathizers of the organization present at its meetings wore fascist-style uniforms reminiscent of those worn by the Hlinka's Guards, the militia of the 1939-1945 wartime Slovakia, a Nazi puppet state.

In Modra, on October 29, police broke up a Slovenská pospolitosť meeting following racist and extremist chants and speeches.

One day later, Slovenská pospolitosť held a meeting in Černová where police apprehended Kotleba and accused him of promoting fascism. However, the police subsequently released him without charge.

Human rights activists People Against Racism had urged Slovak officials to take action against the party, claiming it was breaking several laws.

"The ruling only confirmed our statements about the threat that the party represents to democratic Slovakia and the incompatibility of its programme with the constitution," the People Against Racism told The Slovak Spectator.

The organization says it has been monitoring Slovenská pospolitosť since it was founded and registered with the Interior Ministry.

The media have long debated whether to give space to extremist groups such as Slovenská pospolitosť to disseminate their statements.

Political scientist Miroslav Kusý said it was necessary to talk about these groups, but that the media should not assign them greater importance than they deserved.

Questions have also been asked as to why the Interior Ministry registered Pospolitosť in January 2005 in the first place.