CULTURE Minister František Tóth has hit a rough patch recently. Long a target of the Slovak cultural community, which resents his management of the sector, he has also taken fire from Slovakia's political opposition, which tried to have him recalled by parliament. 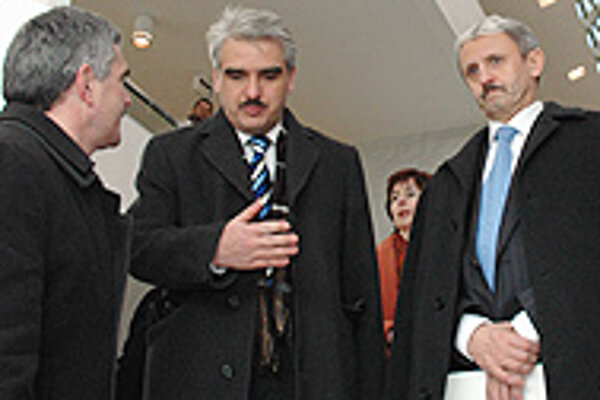 Font size:A-|A+  Comments disabled
CULTURE Minister František Tóth has hit a rough patch recently. Long a target of the Slovak cultural community, which resents his management of the sector, he has also taken fire from Slovakia's political opposition, which tried to have him recalled by parliament.

But only days after surviving a non-confidence motion in the legislature, the minister began to draw friendly fire as well, with Prime Minister Mikuláš Dzurinda telling the press he was considering firing Tóth himself.

Although the PM eventually changed his mind, the news was a nasty shock for the minister.

"Following the Friday [February 24] parliamentary session, when the opposition failed to recall the culture minister, it came as a surprise to František Tóth to learn on Monday [February 27] that the prime minister was considering his recall, especially as the minister was confident that he had never broken any laws, and that he had acted fully in keeping with the decrees approved by the cabinet," Martina Pavlíková, Tóth's spokesperson, told The Slovak Spectator.

Dzurinda said he had wanted to recall Tóth because the minister had not respected a recent cabinet decision to freeze all privatization sales of state assets until after the June general elections.

Despite the government decision, taken on February 22, the Culture Ministry continued to offer buildings and plots of land for sale, saying it would use the proceeds to pay for the completion of the new Slovak National Theatre (SND) building.

Some Sk900 million (€24 million) is still needed to complete the massive construction project, which was begun over two decades ago.

At the end of January, the Culture Ministry published a list of buildings and land for sale. Some of the buildings are registered as Slovak cultural monuments.

Among the real estate up for sale was the P O Hviezdoslav theatre building owned by the Slovak National Theatre (SND) in downtown Bratislava with a minimum purchase price set at Sk236 million (€6.3 million). After no bids were received, the ministry cut the minimum price in half and offered it to the city of Bratislava. According to Pavlíková, the city reacted positively and wanted to meet with ministry officials to discuss the terms of the deal.

The ministry also offered another cultural monument - the Literary Fund building in Bratislava - for at least Sk35 million (€945,945) and advertised the land surrounding the new SND building for a minimum of Sk151 million (€4.03 million).

"It is simply out of the question that before the elections we will be selling off lucrative plots of land and buildings in Bratislava, let alone selling it to a sole bidder," the prime minister said.

After meeting with Tóth twice on February 27, Dzurinda announced he would leave the minister in his post as a solution had been found. Originally, Tóth had argued that the sales were at such an advanced stage that the ministry had no legal tools to halt them. He therefore proposed that the government expressly ban the deals.

According to Pavlíková, Tóth welcomed the PM's decision "with satisfaction, knowing that he had acted in keeping with the law".

Based on the minister's proposal, the government on March 1 added concrete details to its recent decision to freeze privatization sales.

The new decree states that until the elections, scheduled for June 17, the government will freeze all transfers of state assets, including real estate controlled by the Culture Ministry, as well as all transformation processes at state-owned companies.

Before this solution was reached, however, Tóth criticized Dzurinda for succumbing to pressure from the opposition.

The Slovak parliament on February 24 failed to recall the minister when the opposition Movement for a Democratic Slovakia (HZDS) was able to draw only 59 of the 76 MPs it needed to pass the no-confidence motion in Tóth.

However, the minister's victory was far from decisive, as only nine MPs actually backed him by voting against the motion. The majority of ruling coalition MPs abstained from voting.

"If you don't stop the real estate sale you are threatening the prime minister himself, because we [the HZDS] will immediately initiate his recall," Mečiar said in parliament.

Tóth said he was "sorry that an opposition leader has so much influence over the government.

"Despite the fact that elections are approaching, the government should remain functional and should not become a rag in the hands of the opposition," Tóth said in an official statement issued after his initial meeting with Dzurinda on February 27.

But the prime minister said his actions had nothing to do with the opposition's threats.

"This has nothing to do with any opposition leader," Dzurinda said, adding that the culture minister had had plenty of time to sell real estate before, and that when the government decided to halt all sales, the culture ministry should have done the same.

He also said that freezing the sales of real estate would have no impact on the completion of the new SND complex.

"The proceeds from the sale of real estate were to have served to return this Sk900 million to the state budget," Pavlíková said.

The ministry intends to open the new theatre on September 1.