INSPIRED by the Chilean model, Slovakia has taken bold steps to reform its pay-as-you go pension system in the last several years. From the beginning of 2004, Slovaks were given the option to start saving for their pensions through newly established pension fund administration companies (DSS). 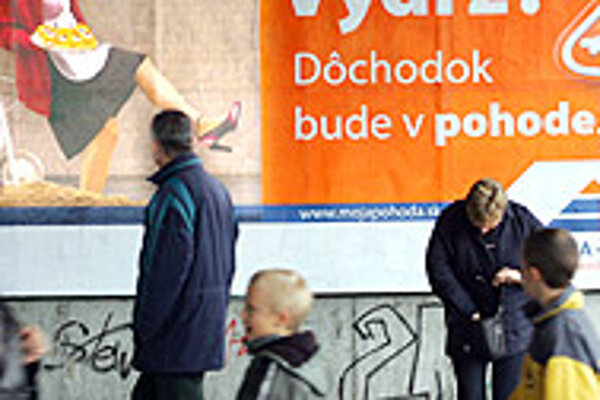 Font size:A-|A+0
INSPIRED by the Chilean model, Slovakia has taken bold steps to reform its pay-as-you go pension system in the last several years. From the beginning of 2004, Slovaks were given the option to start saving for their pensions through newly established pension fund administration companies (DSS).

The reformed pension system has three components: the first is the reformed pay-as-you go element, the second consists of savings in private accounts, and the third is voluntary savings.

More than two years after the second pillar was launched, allowing people privately to determine the size of the pension they will receive rather than accept a standard state pension amount, the pension insurance market has seen some important changes. Out of the eight pension fund administration companies originally established, only six will remain this March: Aegon, Allianz-Slovenská dôchodková správcovská spoločnosť, ČSOB DSS, ING DSS, VÚB Generali DSS, and Winterthur DSS.

The predictions of analysts from 2004, who expected mergers among pension administrators, are coming true. Many say the current number of pension companies is not final, and that only four to five such companies will eventually survive on the market.

The companies cannot make public how many clients they have until June in order that potential clients not be influenced by the numbers in choosing between pension funds. However, the recent mergers say a great deal about the strength of the united companies.

The volume of assets is another important indicator of strength. Winterthur DSS has the most assets so far, followed by Allianz-Slovenská DSS, VÚB Generali DSS, ING DSS, ČSOB DSS, Aegon, and Prvá dôchodková sporiteľňa. But in March, when Allianz-Slovenská DSS completes its acquisition of Prvá dôchodková sporiteľňa, Allianz will move into first place.

In the second half of 2005, ING DSS took over the clients of Sympatia-Pohoda DSS, while at beginning of this year Allianz-Slovenská DSS took over Prvá dôchodková sporiteľňa. Allianz and ING DSS have said the main reason they acquired the smaller funds was to increase their market share.

"ING entered the Slovak market in 1991 with the aim of operating long-term. We opened a bank here, and later an insurance company. Pensions were our logical next step here. The merger with Sympatia-Pohoda was a strategic decision to fulfil our long-term goal," Frans van der Ent, general manager of Life & Pension ING SR, told The Slovak Spectator.

"We united international know-how, financial strength, and a strong brand-name with knowledge of the local environment. To be more specific, we significantly strengthened our position on the Slovak pension market through the merger, and we reached the right level of savings of scale and efficiency."

Jozef Paška, chairman of the board of directors of Allianz-Slovenská DSS, said that thanks to the acquisition of Prvá dôchodková sporiteľňa, his firm would soon administer the largest volume of pension fund assets and become a leader on the pension savings market.

"Size is extremely important in reaching a high level of efficiency and an optimum level of investment risk. In addition, from the beginning of the pension reform, strength and stability have been our main arguments in addressing clients," Paška said.

Almost all players on the Slovak pension market believe that Slovakia, with its 5.4 million inhabitants, does not need six pension funds.

Tatiana Balážová, a member of the board of directors of ČSOB DSS, said five pension funds would be quite sufficient. "Mergers can create a certain balance that ensures the system is healthy," she said.

Peter Socha, chairman of the board of directors of Winterthur DSS, said he expected the number of funds to drop to four or five within two years.

"After the merger of Prvá dôchodková sporiteľňa and Allianz-Slovenská there will be six pension funds, three of which will control 75 percent of the market. From the beginning of the reform, 150,000 clients was considered the threshold for an effective return on investment.

"Shareholders in the companies that did not reach this level will probably think about recovering their investment, and in this context we can expect further movement on the pension market," Paška of Allianz-Slovenská said.

Van der Ent of Life & Pension ING SR, the company that started the concentration process, noted that the players had expected a similar development several months before the second pillar was launched in 2004. "I think in the end there will be five, maybe only four players on the Slovak pension market," he said.

As of the beginning of this year, Credit Suisse Life & Pensions changed its Slovak brand name to Winterthur DSS, in order to demonstrate its connection to its mother company, the Swiss insurance firm Winterthur.