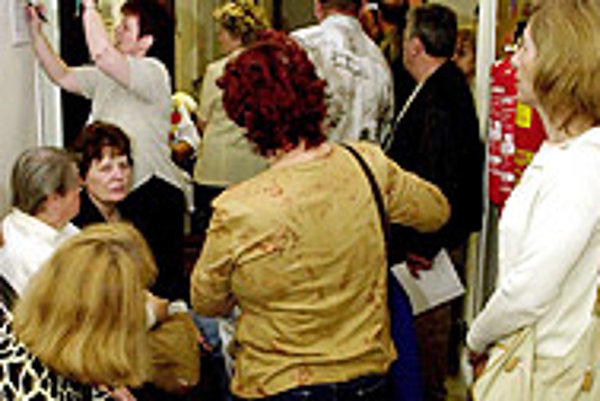 The Slovak social insurer, Sociálna poisťovňa, reported that as of February 7 over 1.1 million people had joined the second pillar since it was launched in 2004. So far, only 7,484 people have asked to switch their pension fund management company (DSS).

The Labour Ministry, which is responsible for the pension reform, does not expect people to change administrators on a large scale.

"It's the first year that the second pillar has been in existence, and the system is only now stabilising," Labour Ministry spokesman Martin Danko told The Slovak Spectator. "Client payments are gradually reaching the accounts of pension fund management companies, which are only now starting to invest them.

"This means that a comparison between fund yields at different pension fund companies is not yet a relevant criterion for choosing between fund administrators, as the second pillar has only been working for a year."

The pension management firms also say there is so far no reason to switch companies. Pension insurance, they say, is a long-term product, and it is not yet possible to judge which company offers a better yield.

But the companies also have a good reason to call for calm - they have little way of defending themselves if clients decide to move en masse. A fee for switching pension funds that was originally included in the draft pension reform bill was abolished in the final version.

Frans van der Ent, general manager of Life & Pension ING SR, said pension management companies were watching the situation closely, and that as long as the ratio of customers wanting to switch was low, no action would be taken.

The companies raised their concerns with Labour Minister Iveta Radičová, who said she was "prepared to adopt additional measures if the rate [of switches] exceeds five percent", van der Ent said.

Van der Ent said he was confident that the majority of clients would behave rationally, and that they understood that pension insurance was a long-term business. ING expects a slight increase in the number of switches in the short term, but believes that the trend will soon fall off.

"Over the longer term, each company will consider introducing a loyalty incentive programme for their customers. This is a normal marketing activity in both the financial and non-financial sectors, and pension funds will be no exception," van der Ent said.

Jozef Paška, chairman of the board of directors of Allianz-Slovenská DSS, said he believed the majority of switches currently occurring were speculative in nature, as there was simply not enough information available to make rational choices on changing funds. He blamed the switches on pension fund agents out to make some quick money by encouraging clients to move.

"There are many profit-loving agents out there that misuse shortcomings in the pension legislation to "woo" savers. Although our concerns that this phenomenon might become widespread were not borne out, we still consider the risk to be real," Paška said.

He noted that that pension system legislation lacked effective tools to prevent massive switches and ensure stability in the second pillar. "Without legislative support pension funds do not have the strength to handle this phenomenon," he said.

Tatiana Balážová, a member of the board of directors of ČSOB, does not believe pension fund management companies will see significant switches, but says companies should beware of speculative changes. "We are trying to prevent artificial, speculative switches and reveal possible speculative agreements among agents in advance," she said.

Viktor Kouřil, a member of the board of directors of VÚB Generali DSS, said that the quality of services was so far the only tool a pension fund had to avoid switches. However, he said, "sooner or later we can expect an amendment to the law introducing fees for unjustified switches, exactly as it was written in the original law, before it was senselessly abolished".

Peter Socha, chairman of the board of directors of Winterthur DSS, said he believed the number of switches would not exceed five percent.

"In the future clients will judge mainly the yields of pension funds, their stability, and the quality of their services. But so far it is too early to assess the yields. Nor can services really be evaluated yet because the product is new and demand for additional services is minimal."

Who can switch pension funds?

If a pension fund client wants to change his fund administrator, he must wait until a year has passed since he signed his first contract on pension savings. After he signs a contract with a new pension fund administrator, the new administrator will send the contract for registration to Sociálna poisťovňa (SP), and the social insurer will announce the switch to the former administrator.
"Switching between pension administrators should not bring a significant change in the conditions of pension savings. Of course, if a client changes companies in order to secure better yields, this could represent a change," said SP spokesperson Vladimíra Pôbišová.

Source: Trend business weekly
* A merger between Prvá dôchodková sporiteľňa and Allianz-Slovenská DSS should be completed in March 2006.