The poetry of war

"WHATEVER else [a Marine] may do with his life - build a house, love a woman, change his son's diaper - he will always be a jarhead." This is the main message of Jarhead, the visually stunning new movie by American Beauty director Sam Mendes that portrays the first Gulf War as something deeply poetic. 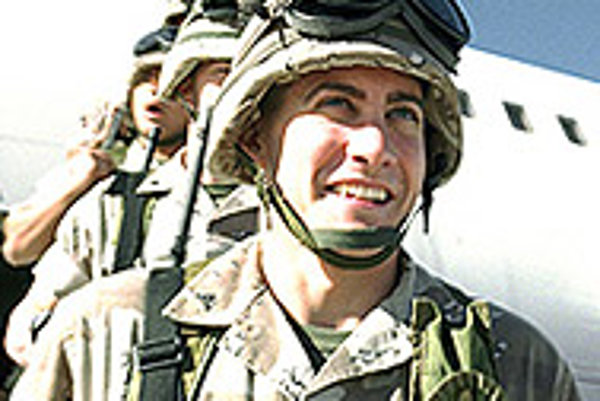 "WHATEVER else [a Marine] may do with his life - build a house, love a woman, change his son's diaper - he will always be a jarhead." This is the main message of Jarhead, the visually stunning new movie by American Beauty director Sam Mendes that portrays the first Gulf War as something deeply poetic.

According to Marine sniper Anthony Swofford (Jake Gyllenhall), Marines are called "jarheads" because their heads are empty vessels waiting to be filled. (The real origin of the term most likely comes from World War II, when the Mason Jar Company switched to producing helmets for Marines.) And their heads are filled with exhausting training, fear, boredom, testosterone, more fear, and more boredom. Jarhead zooms in on all the minute details to give us deep insight into the surrealism of a Marine's personal world.

"Without my rifle, I am nothing", the Marines are made to repeat by Staff Sgt. Sykes (Jamie Foxx), a tactic that is meant to dull them into unfeeling killing machines. Yet the base camp's Wall of Shame, which displays pictures of unfaithful ex-wives and girlfriends, oozes with very real pain.

This dichotomy is too potent for many of the Marines, especially Swofford's best friend, Troy (Peter Sarsgaard), who breaks down after Swofford and he are denied their first kill. Only killing could have justified wandering in the desert over the last six months, boiling under the oppressive crimson sky, and getting soaked in oil rain.

But when asked why they're waiting in a desert so far from home, their training has taught them not to examine the politics of the situation. "F-- politics," Troy says. "We're here. All the rest is bulls--t."

The characters run a very realistic spectrum. Fowler (Evan Jones) is a squishy-faced mental defective, who thinks it's funny to kill camels and carry a charred Iraqi body he names "Ahab" with him during patrol. Fergus (Brian Geraghty) is bookish and just too sensitive for the job. Cortez (Jacob Vargas) beams with pride at the news of a new baby awaiting him at home.

All of these personalities and details were effective at creating a mood, but a more structured plot would've made the story clearer and left a stronger impression. Instead of just being told these men would always remain jarheads, we should've been shown. Instead, we saw only a cursory glance of the Marines' post-war lives in the last few seconds of the film.

And if the point was to show what serving in the war was like, then Swofford's narration should've stuck to that topic. No need to tell two stories at once.