SLOVAKS may have heard a word here or there about Zimbabwean Shona stone sculptures, which are uniquely coloured artworks chiselled out of 2.5 billion-year-old volcanic rocks that consist of some 250 ores. 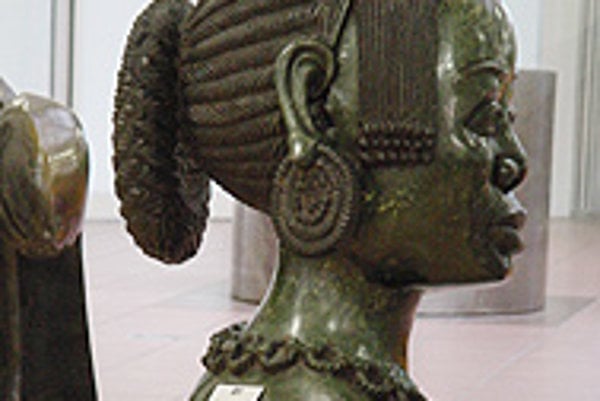 SLOVAKS may have heard a word here or there about Zimbabwean Shona stone sculptures, which are uniquely coloured artworks chiselled out of 2.5 billion-year-old volcanic rocks that consist of some 250 ores. Now, with Bratislava's Amai Gallery bringing the art to the country, they might get a better understanding as to why Richard Nixon, Queen Elizabeth II and the Rockefeller family have all been fans.

The Amai Gallery was set up by two young people, Serbian Goran Unkovski and Slovak Daniela Jančíková, to test how interested the Slovak public might be in this kind of art. The two met while studying economics in Zimbabwe.

The gallery serves partly as a connection to Zimbabwe, which the couple calls their second home. It has existed for a month and a half and exhibits some 300 works by a dozen artists.

"Having lived in Zimbabwe for 15 years, I noticed a great awareness for Shona art in the US, Western Europe and Australia, but none in Eastern and Central Europe," said Unkovski, who teaches at Bratislava's City University.

"Upon deciding on where to settle after we finished our studies, we thought this would be the best way to promote the art also in this region."

The couple's own research showed that, out of the countries in the European Union, Slovakia is the least familiar with Shona sculptures.

The sculpting tradition dates back to the 1950s when Frank McEwen recognised the raw potential of the Shona, Zimbabwe's largest tribe, which he called "artistically unspoiled Africans." McEwen founded a Shona school, where he taught students to express their mythical beliefs and inner feelings with stone carvings. After McEwen left the country in 1973, a war for independence hindered the country's artistic development. It wasn't until the war ended, in 1980, that the Tengenenge sculpture community emerged and gave the Shona tradition a contemporary shift.

With Slovakia openening to the world, Unkovski believes it is the right time for the Amai Gallery to incite curiosity for the art in the region.

"People's first impression of the art is to think it's a cheap, wood imitation of some tribal crafts. Only when they

look closer and find out the material is stone, unpainted, in its natural form, does their interest increase," said Unkovski.

"It's extremely difficult work. And they do it all with such basic tools, such as a hammer and a chisel."

Unkovski's parents left Serbia for Zimbabwe in 1991 after Yugoslavia split, and opened a gallery there, with batiks and textile art. They are well connected to the country's art scene and know many of the local sculptors personally.

"They organise the work there," Unkovski explains, "they talk to the artists, purchase the works, assure the packaging and shipping to Slovakia."

The US has some 50 galleries that sell Shona art and dozens can be found in Great Britain, the Netherlands, Denmark and France. Bratislava's Amai Gallery, situated in the furniture and design shopping centre Soravia Interior, he says, is the largest place exclusively devoted to exhibiting and selling this art in Eastern and Central Europe.

Slovak art experts the Spectator talked to were rather sceptical of the Amai's achievement. They said they knew of shops, which had not sold anything for several years. On the other hand, unless they see the gallery and its work, they cannot rule out a possible success.

The gallery's business location is therefore no coincidence. The price of the artworks, some of which weigh almost half a tonne, range between Sk3,000 and 200,000 (€80 and 5,360), with the largest expense being the transportation cost. People who visit the gallery are those searching for ideas on how to invest in furnishing their interiors and decorating their gardens in a unique way.

"Five or six years ago, it would have been difficult to open such a gallery here. Things were still uncertain back then concerning people's incomes. Shona sculptures are not cheap," says Jančíková, whose father was an enthusiastic Shona sculpture collector and stirred her interest for the art.

But high prices for Slovaks are still very cheap for people in the West. No wonder, the country is still near the bottom when it comes to European Union income standards.

"Slovakia is definitely on a very strong path for growth. People's incomes are increasing and they're beginning to think about where to invest next after buying the immediate necessities," said Unkovski.

His co-partner Jančíková adds: "People are also travelling more. As they get to know the world, their interest in art broadens."

With this in mind, Unkovski and Jančíková are optimistic about their project's future. Apart from bringing the art directly to Slovaks, they also plan to organise workshops, seminars and lectures on it. One day, they might even bring some African artists for a visit to the country where their work has outpaced them.

The Amai Gallery is housed at the Soravia Interior, a shopping centre located at Rožňavská 28. For more information visit www.amaigallery.com.