PM hobbles off to White House on crutches

DESPITE a serious lower leg fracture suffered while skiing on March 4, Slovak Prime Minister Mikuláš Dzurinda was determined to stick to his busy schedule during the work week and fly to the US on March 12 to meet George W Bush as planned. 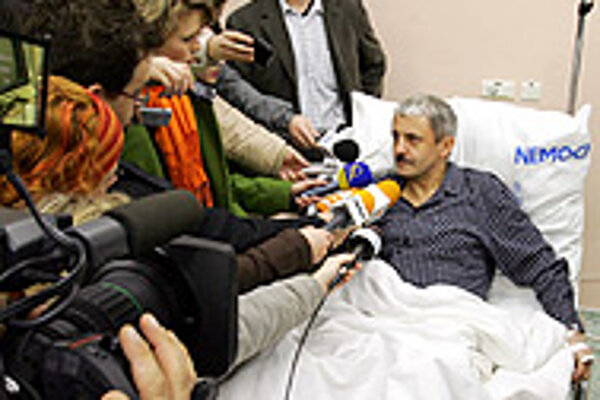 Font size:A-|A+  Comments disabled
DESPITE a serious lower leg fracture suffered while skiing on March 4, Slovak Prime Minister Mikuláš Dzurinda was determined to stick to his busy schedule during the work week and fly to the US on March 12 to meet George W Bush as planned.

The PM had been scheduled to fly to the US one day earlier, but his broken leg required surgery, forcing him to delay the flight.

Apart from his visit to the White House, Dzurinda also kept to his scheduled meeting with British Prime Minister Tony Blair in Bratislava on March 9.

The importance of the agenda for talks in the US, as well as perhaps the opportunity for looking resolute with June elections approaching, were apparently sufficient motivation to get the PM back on his feet.

According to the Foreign Ministry, the British PM should "discuss further cooperation between his state and Slovakia in the political sphere in the context of both countries' EU membership" during his 13-hour official visit to Bratislava.

However, Dzurinda's trip to the US was expected to highlight a far more popular topic - the US requirement that Slovaks obtain visas to visit America.

Dzurinda confirmed he was planning to "knock on the door" of US visa policy towards Slovakia.

"It's always worth going to America and knocking on the door so that Slovak people can move freely and go to the US without having to pay for the visa," said the PM at a brief meeting with the media on March 7.

According to Foreign Ministry spokesman Juraj Tomaga, "the cancellation of the visa duty for Slovak citizens would help improve mutual relations between our states.

"We welcome the mutual dialogue and the US proposal, which was presented by US President George W Bush during his visit to Slovakia on February 24, 2005, in the form of a road-map that should lead to the simplification and gradual elimination of the visa duty for Slovak citizens travelling to the US," Tomaga told The Slovak Spectator.

"Slovakia understands the duty of the US Congress and the administration to ensure the safety of US citizens, but we believe that Slovak citizens do not pose any threat in this respect.

"We know that we too have homework to do, and we are doing it - the extradition agreement [between the US and Slovakia] has been concluded, and the number of rejected visa applications is decreasing. After the introduction of further necessary steps and after Slovakia's entry to the Schengen [EU border] Treaty, the US should no longer delay the solution of this issue. Thanks to Slovakia, the question of the visa duty for new EU member states is regularly brought to the table also during US-EU talks," Tomaga said.

The motive of the PM's trip to the US was thus clear.

"We can take a small but important step on the road towards the cancellation of the visa by the US," Dzurinda said at the end of February.

The Slovak diplomatic corps believes that good relations with the US are the basis for positive change regarding the visa policy.

"We believe that Slovak-US relations are the best they have ever been. This was also confirmed by the first-ever visit of a US president to Slovakia when President Bush came to Slovakia on February 23 and 24, 2005 for the summit with Russian President Vladimir Putin," said Tomaga.

Whether these warm relations will produce a thaw in US visa policy remains to be seen, as US officials were giving nothing away before the White House meeting.

"When the White House announced that Prime Minister Dzurinda would visit Washington and meet with President Bush, it emphasized that the Slovak Republic is one of America's closest friends and allies and is an active partner in advancing freedom in Eastern Europe, Iraq and Afghanistan. The Slovak government has been at the forefront of efforts to promote democracy in the Balkans, Ukraine and Belarus," US Embassy Public Affairs Officer Barbara Zigli told The Slovak Spectator.

"Regarding the visa issue, we recognize that it is a very important matter for Slovakia, and one that President Bush and Prime Minister Dzurinda laid out in the visa roadmap. We look forward to further cooperation with the Slovak government for the mutual benefit of our peoples," she said.

Zigli added, however, that "since the meeting hasn't taken place yet, we cannot prejudge how the discussion between the two leaders on this issue will go, but we will address the issue as friends".