THANKS to the Swiss Embassy in Slovakia, Slovaks were recently given a unique opportunity to observe the Swiss parliament in action, without the need for a flight ticket. 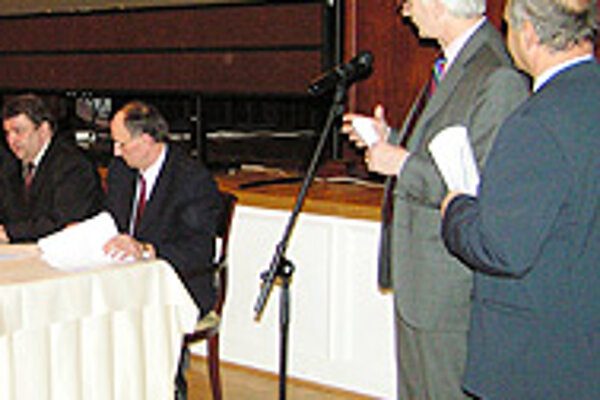 Font size:A-|A+  Comments disabled
THANKS to the Swiss Embassy in Slovakia, Slovaks were recently given a unique opportunity to observe the Swiss parliament in action, without the need for a flight ticket.

On March 7, Swiss Ambassador Josef Aregger showed Mais im Bundeshaus (Corn in Parliament), a documentary by Swiss filmmaker Jean-Stéphane Bron, that takes the audience inside the Swiss Parliament. Aregger also invited some of the documentary's "actors", who are actually politicians and members of the parliament, to meet with their Slovak colleagues.

"The movie is done in a way that should be interesting for any parliamentarian or person interested in parliamentary democracy. Since Slovakia is a young democracy, we thought it particularly valuable to draw the attention of members of the Slovak parliament to the Swiss practice of parliamentary work and political traditions," Ambassador Aregger told The Slovak Spectator.

Aregger warned that someone reading the title before actually seeing the film might be tempted to think it is a discussion about the pros and cons of genetically modified foods and gene technology.

"This assumption is, however, wrong," he added.

Described as a civics-lesson documentary by some and a political thriller by others, Corn in Parliament won the Swiss Cinema Prize 2004 for its absorbing and entertaining trip to the very heart of Swiss parliamentary democracy.

The documentary follows the evolution of a parliamentary debate on genetic engineering through cameras that follow five MPs with differing attitudes on the issue.

The film is a condensed view of the lawmaking process from inception to enactment. The various lobbying practices parliamentary members use to gain votes for their proposals are caught on camera, as are some sharp exchanges between people of strong convictions. Members changing their minds at the last minute is what makes the legislative process a hair-raising experience to the very end.

"The creators of the documentary could have selected any sensitive law because the point of the movie is to show this exciting legislative process, its nuances, and the unexpected turns that developments can take," Aregger said.

The Swiss politicians being filmed admitted that it took a while for them to get used to the presence of a camera in their political lives, but they eventually completely forgot about it.

However, despite negotiating a very sensitive topic and having strong objections towards the stands of their political opponents, the Swiss MPs never really cross the line of political decency and courtesy in the movie.

Is this behavior the everyday reality in the Swiss parliament or, knowing they were being watched, did the deputies suppress their anger?

"Believe it or not, this is how we actually behave," former MP Jacques Neirynck, originally an academic, said. He added that the atmosphere in parliament was more polite than that he had experienced in the universities.

After seeing the hour and half-long movie, the Slovak parliamentarians discussed the similarities and differences in the legislative process, agreeing that it might take Slovakia six or seven political generations until Slovak democracy resembles the Swiss one.

The film compelled MP Miroslav Maxon to the following comparison: "The film's running time was the same as what we needed today for discussing five laws. So, it doesn't take us 12 or 14 months to adopt a law, as we saw in the film, but often 12 or 14 minutes."

Maxon, one of the longest-serving parliamentarians in Slovakia, explained that by entering the European Union Slovakia took up the obligation of adopting a certain number of laws.

"I really envy you the time you have at your disposal," he said.

Another aspect that surprised the Slovak MPs was that the discussions on the law within the parliamentary committee were held behind closed doors, while in Slovakia such discussions are open to the public unless they involve issues of national security. The Swiss MPs responded that the issue of opening the doors for the public has been a subject of intense debates.

The Slovaks also inquired about the presence of lobby groups in the Swiss parliament and their connection to the MPs who openly acknowledge their links, which is not particularly a practice in Slovakia.

"We are part-time politicians, each politician has an interest group behind him. You can even check who finances us on the web," said Johannes Randegger who has close ties with Novartis.

The Swiss MPs say this enables them to be closer to people. "We try hard in an open way," Randegger said.

In the end, Slovak MPs concluded that they would certainly be willing to act in a similar movie.