WITH FOREIGN investors increasing the competition in Slovakia, companies have started to find ways to emphasize their corporate identity more clearly. 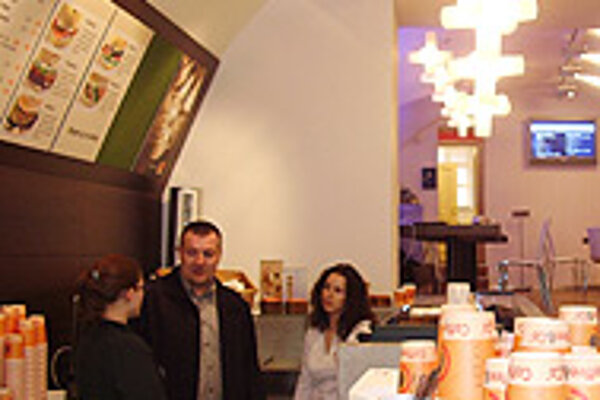 Corporate design manuals often suggest that a company express its identity by making all its buildings and offices uniform. However, Katarína Lesayová, a Slovak psychologist who specializes in corporate identity, is warning against copying a mother company's design. She says that office design should also take the local perception of colours and symbols into account.

"It is becoming more and more difficult to differentiate between the services and products of individual companies, which is why differentiating by corporate identity is coming to the fore," Lesayová told The Slovak Spectator.

Corporate identity includes tangible aspects, such as buildings, architecture, design and the decoration of client areas. However, sounds, touchable objects, and fragrances have also been getting into the mix.

Premises should communicate the company's values.

"This means that, for example, financial and banking institutions that emphasize safety, trustworthiness, and stability in their marketing communications should use a visual style in their premises that is compatible with that message. The style should include sober furnishings without extravagant fashion and a wild combination of colours," Lesayová added.

An advertising company that presents itself as creative and original can afford extravagant modern design and more playful colourfulness.

A restaurant that tries to create a homey atmosphere should not use modern furniture made of a combination of glass and metal, but rather wood with accessories in natural colours.

Lesayová pointed out that, in general, firms should also consider the symbolism that certain colours represent in the cultural traditions of the countries in which they are located. "It is important to find out about the symbolism of colours in other countries, too, rather than follow a corporate design manual that would risk alienating customers."

She also gave an example of one of the more interesting differences between Slovak and western office design traditions.

More and more companies in Slovakia are using so-called "open-space offices." "This is because of the growing number of foreign corporations in Slovakia, as well as cost-cutting measures. In our culture, closed office spaces are more traditional. One office was shared only by a small number of people."

Before changing to open-space offices, companies should first prepare their employees for these changes and literally teach them how to work in them, Lesayová said.

Such open-space offices should definitely have a special room for breaks and conference calls, where employees can talk without disturbing their colleagues.

"Employees who are not properly instructed on how to work in an open space might continue their old work habits. The result might be broken concentration and complaints about noise and disruptions. Foreign companies should take into consideration that open space was not common in the past in Slovakia. It can cause problems, especially for employees who are middle-aged or older," the psychologist added.

The Slovak Spectatorasked two financial institutions from international groups what rules they follow when furnishing their offices and branches.

Roman Začka, head of public relations for Tatra banka, said that although Tatra banka is a part of Raiffeisen Zentralbank Group, it operates in Slovakia as an independent brand. Tatra banka keeps its own design manual, so that all its branches have a unified design exclusive to Tatra banka.

Tatra banka uses dark blue for marketing communications and requires branches to appear clean, transparent, and professional. Branches are not allowed to change interiors, but the rules concerning back offices and the company's headquarters are less strict.

However, even a conservative institution like a bank was willing to try something new. "Current trends encouraged us to cooperate with designers and architects whose designs exceed the previous concepts. Our new "Bank + Coffee" branch, which incorporates a café, is an example of this. This branch does not bear the characteristic features of our other branches," Začka said.

VÚB bank belongs to the Italian Banca Intesa group. Alena Walterová, spokeswoman for VÚB bank, also points out that it visually appears as an independent company, and has recently gone through a large redesign.

"[Before the bank was bought by Italian investors], the corporate design of our more than 200 branches represented more or less the "artistic feelings" of our local branch directors. Since then, though, the bank has undertaken steps towards unifying branch image and lifting the comfort of client servicing," Walterová said.

The rules for furnishing the branches are defined in a design manual. The furniture is in subtle colours of white and silver with a wood décor that makes the whole interior friendlier. Complementary colours of red, green, blue, and orange give the interior a livelier atmosphere. Colour segmentation of the space also simplifies client orientation.

Psychologist Katarína Lesayová explained for The Slovak Spectator what some colours mean in the Slovak environment and where it is most suitable to use them.

Yellow has an activating, energizing impact that inspires optimism, a feeling of freedom and relaxation. It also stimulates motion, which is why it is suitable in premises used for physical activity. When designing floors in common interiors, be careful not to mix yellow with orange. These colours do not give a feeling of "firm ground under your feet", so less rich tones might be preferred.

Red symbolizes warmth, energy and strength. It has an activating impact. However, apart from passion and excitement, it can also give rise to aggression and a tendency toward violence. Hot-tempered people should avoid red. The colour also optically narrows the premises.

Blue is the colour of rationality, sanity, and safety. It has a calming and cooling effect and is suitable for premises meant to be relaxing. Bluish tones optically make the premises longer, which create the feeling of depth, air and freedom. However, it can make people feel melancholic.

Green is perce7ived as a healthy and natural colour that does not compete for attention. It has a calming influence. It does not stimulate activity, but, on the contrary, may lead to passivity. It represents the safety, protection, tradition and nutrition that flow from nature. When in tones that include a large portion of yellow, it is perceived as freeing, fresh and symbolic of change.

Brown is the colour of home and tradition. It is suitable mainly for floors. While on the one hand it gives a feeling of reliance and reliability, a feeling of "a firm ground under your feet" that radiates warmth and comfort, its dominance can create dependence and a feeling of being subordinated.

White and black sit on the margins of colour - any other colour is darker than white or brighter than black. White represents everything that is connected with light and openness. It is unemotional and reflects emptiness and pureness. Black is just the opposite. It represents darkness, heaviness, closeness and sadness. Black-white combinations express either neutrality or tense opposition. They express the battle between light and dark. The two colours should be balanced equalised in the premises.

The combination of colours should respect the function of each room. Any space used for work requiring concentration should be in softly coloured tones that don't distract. Premises used for teamwork should include livelier colours that stimulate more activity.