City to cut tall buildings down to size

THE BRONZE statue named Freedom that is perched on top of the US Capitol building stands 57 metres from the ground, and is the highest point in Washington, DC. This is no accident, nor any designer's whim - it expresses the belief that freedom is the country's highest value, and that a nation's architecture should reflect its cultural aspirations. 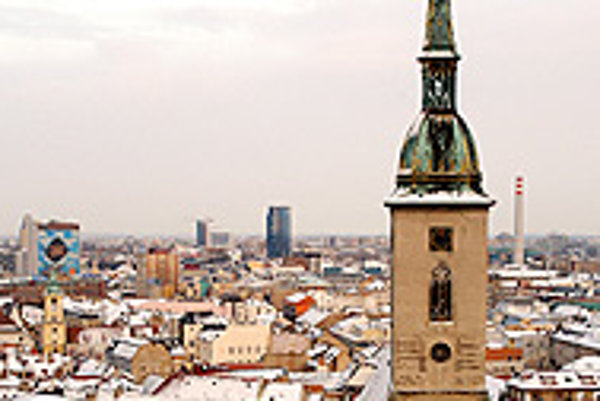 Font size:A-|A+  Comments disabled
THE BRONZE statue named Freedom that is perched on top of the US Capitol building stands 57 metres from the ground, and is the highest point in Washington, DC. This is no accident, nor any designer's whim - it expresses the belief that freedom is the country's highest value, and that a nation's architecture should reflect its cultural aspirations.

Not so in Bratislava, whose tallest buildings are a mishmash of communist and post-1989 shrines to money and media. Only three buildings are more than 100 metres tall - the 33-storey central bank tower near downtown, the 28-storey Slovak Television building in the Mlynská dolina neighbourhood, and the 28-storey Presscentrum in the docklands - but they clash badly with their surroundings, and are more of an eyesore than their size warrants, architects say.

The problem was, and still is, that the Slovak capital has no unitary height regulations for buildings, nor even a master plan that would show where tall buildings can be erected.

"The height aspect of the city's development has been absent from city planning documents so far, and has only been limited by [the proximity of] the airport," said Ivan Macko, head of the land program department at Bratislava City Hall. Air traffic rules say that buildings within a 15-kilometre radius may not exceed 100 metres in height.

"This means that buildings such as the National Bank of Slovakia, the Presscentrum, VÚB bank [88 metres] and Slovak Television were not based on a city-wide concept, and that the issue of where to locate them was considered individually in relation to the area directly around them," Macko said.

"These buildings, however, have become important elements in the city, and even dominate it."

In the 1930s, Bratislava's tallest skyscraper was the 11-storey Manderlák building, which still stands at the corner of SNP and Kamenné squares.

Since then, the city has been reshaped by its wartime experience, four decades of communism and monolithic "socialist realism" architecture, and then 16 years of free market construction, with little heed paid to regulations.

But several signs have recently emerged that the era of chaotic and random building in the Slovak capital is drawing to a close. For starters, Bratislava expects to have a new master plan approved by the end of April, after more than seven years spent preparing it.

According to City Hall spokesman Milan Vajda, the plan deals separately with the location of tall buildings.

"The tall buildings concept was considered one of the most important when creating the new plan," Macko said.

He explained that the plan was based on two principles: "intensifying" existing land use areas and establishing new areas. "Intensification involves 'lifting architecture to new heights', which we consider a logic next step in Bratislava's development."

Secondly, the city appointed a new main architect in February; while the position is only an advisory one, it was given to a man who is no friend of skyscrapers.

"Everywhere around the world such buildings are concentrated in areas like nests that are called 'downtown'; here, they are scattered all over the city, at random and with no planning," said Štefan Šlachta, president of the Society of Slovak Architects.

"The city must definitely regulate them."

While skyscrapers can enrich a city's panorama, the new main architect said, they can also destroy it, "especially in relation to its historical architecture".

To prevent this from happening, municipal authorities and conservationists are now debating rules for developers building in protected areas, particularly in the historical core.

"We are thinking of limiting the height [of buildings] at 21 metres in the city's conservation zone," said Peter Jurkovič, director of the Regional Monuments Board in Bratislava.

Jurkovič explained that the height limit had been reached based on urban research and the historical height of buildings in the city, but that no conclusion had yet been reached. He added that exceptions might be granted in specific areas of the city.

"Such specific rules on building in conservation areas didn't exist before. That's why we see such buildings as the National Bank, which is absolutely different in scale and structure from the town's conservation zone," Jurkovič said.

According to Vajda, the next generation of tall buildings will go up outside the historical centre.

"The areas of Bratislava most suitable for tall buildings in the near future could be the Mlynské Nivy area [around the main bus station], Pribinova Street [near the docklands], and the area enclosing the Prístavný and Starý most [bridges] and Einsteinova street [in Petržalka]," he said.

Bratislava is currently undergoing a construction boom. Architects say that the planned projects around the Danube River - Eurovea (on Pribinova Street), Podhradie, Riverpark (on the Danube near the PKO centre) and a large project in Petržalka between the Prístavný and Starý most bridges - will have the greatest impact on the future appearance of Bratislava.

Vajda said the Slovak capital stacked up well against other international centres, and that the new rules would protect the appearance of the city when even larger developments arrived.

"Bratislava is developing in a similar way to comparable capitals such as Prague, Budapest, Ljubljana and Zagreb, and in international terms the trend in Bratislava and these other states is rather conservative," he said.