Dawning of a new era

LAST weekend's premiere of Giacomo Puccini's final opera, Turandot, was a homecoming in more ways than one. To begin with, this year marks the 80th anniversary of the opera's premiere at the famed La Scala opera house in Milan and just over 40 years since it first graced the stage of the Slovak National Theatre (SND). 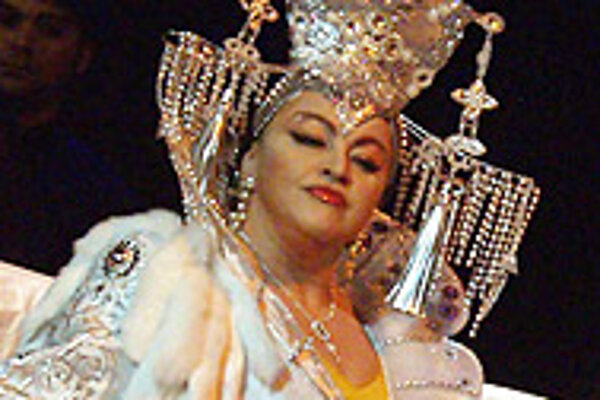 LAST weekend's premiere of Giacomo Puccini's final opera, Turandot, was a homecoming in more ways than one. To begin with, this year marks the 80th anniversary of the opera's premiere at the famed La Scala opera house in Milan and just over 40 years since it first graced the stage of the Slovak National Theatre (SND).

Then, Ondrej Lenárd, one of the nation's most respected conductors and a former principal conductor of the SND, made a triumphant return for the event. And finally, producer/director extraordinaire Jozef Bednárik, who has headed some of the SND's most successful productions, used the occasion to announce his retirement.

Luckily, Turandot is an opera sturdy enough to carry such importance with grace. Because it's set in China, Puccini spent time absorbing Asian music and art, and was inspired by the thin, sliding motifs so typical of Far Eastern music. His vocabulary remained very much 20th-century Italian, though, with a passionate love story, robust choral scenes, and beefy orchestration.

The SND assembled a highly respected international cast for the production, including singers from the Czech Republic, Romania, Italy, Columbia, and Japan, as well as the SND's own top soloists.

The opera begins as Turandot, the princess of Peking, is set to execute another suitor who has failed to answer her three riddles. Prince Calaf wanders among the crowd that has gathered to watch and finds his long-lost father, Timur, and loyal servant, Liu. As the moon emerges, the crowd silences and urges Turandot to spare the suitor's life, but she refuses. Calaf is struck by the princess's beauty and makes his way toward the gong that announces a new suitor. Turandot's ministers, Ping, Pang, and Pong, try to discourage him, as do Timur and Liu, but the young prince is determined, and calls Turnadot's name as he strikes the gong.

The production was somewhat pared down from Bednárik's usual style. Instead of enormous decorative scenery, the emphasis seemed to lie on subtle visual effects, such as colourful costumes, designed by Ľudmila Várossová, ballet dancers, and screens that displayed shadow dances.

Lenárd had obviously coached the chorus on producing a rounder and fuller sound, which it did while supporting the entire cast, but it tended toward its usual timidity when alone. Iveta Jiříková (Liu) was a column of sound that poured genuine silvery legato, especially during her first act aria. Ján Galla (Timur) sounded shaky and worn out in his very limited range.

In the second act, Ping, Pang, and Pong long for Turandot's heart to be filled with love. The ancient Emperor Altoum tries to dissuade Calaf, but in vain. Turandot finally enters and tells the story of her ancestor, who was brutally conquered by a foreign prince. Therefore, she shall never allow a man to possess her. Turandot then poses her three riddles and, to everyone's amazement, Calaf answers correctly. When the princess begs the Emperor to intercede, Calaf makes a deal: if Turandot can learn his name by dawn, he will sacrifice his own life.

The story concludes with a proclamation: no one in Peking shall sleep until the prince's name is learned. Timur and Liu are dragged in, but Liu insists only she knows, so Turandot orders her tortured. When asked why she still refuses to reveal it, Liu utters only one word: "love". With the torture about to be intensified, Liu grabs a dagger and kills herself. Turandot then finds herself alone with Calaf, who grabs her close and kisses her. Turandot is overcome, and Calaf tells her his name. As the crowd rejoins the scene to hail the Emperor, Turandot approaches and announces the stranger's name is - Love.

It's unfortunately true that a tenor's performance is judged heavily on his performance of Calaf's third-act aria Nessun dorma, which was made famous by Luciano Pavarotti during the popular Three Tenors concerts. Mario Malagnini (Calaf) had flowing diction and a smooth lyricism that lifted his soft legato through the ardent vocal line. He was impressive and exciting. Ľubica Rybárska (Turandot) had the appropriate stage presence, but her uneven breath control impaired her legato and left her only the ability to swell powerful high notes. Her greatest dramatic moment, when Calaf kissed her, also fell somewhat flat. Jiříková's acting and facial expressions during her death scene, though, were very effective.

A lot of attention was paid to tradition - Lenárd even paused a minute after Liu's death, the last part Puccini completed before his death - but one got a sense a new era of internationalism and profe-ssionalism is dawning at the SND.