A portrait of a US artist in Slovakia

JEFFREY Hessing recently finished his second fellowship at the Sympa artist's retreat in Patince. The symposium, located in the hamlet on the Danube River near Komárno, has existed for 11 years, and is financed by a group of Slovak benefactors. 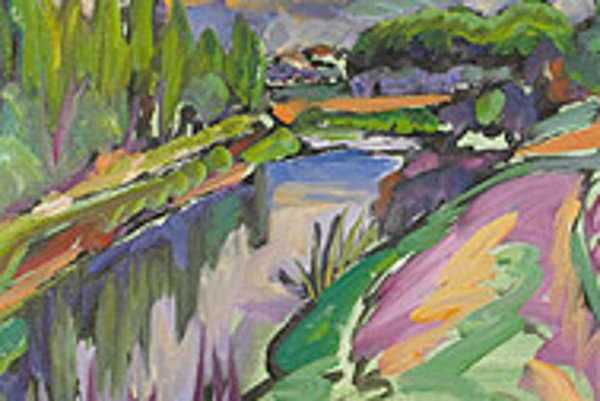 Font size:A-|A+  Comments disabled
JEFFREY Hessing recently finished his second fellowship at the Sympa artist's retreat in Patince. The symposium, located in the hamlet on the Danube River near Komárno, has existed for 11 years, and is financed by a group of Slovak benefactors.

An American artist born in Brooklyn, New York, Hessing has spent most of his professional life in the south of France. In his paintings, one can see the influence of French impressionism and post-impressionism, as well as more modern masters such as Matisse, Picasso, and Chagall. Among other places, collections of his work can be

found at the Centre Culturel Henri Matisse, Vence, France and the Rose Art Museum in Waltham, Massachusetts. Besides painting, Hessing regularly performs as a blues guitarist and singer at local nightclubs in Nice.

John Sherwood recently interviewed Hessing about his experiences as an artist in Slovakia for the Spectator.

The Slovak Spectator (TSS): What's a typical day like at Sympa?

Jeffrey Hessing (JH): The days are filled with painting and the nights with music and dancing. Many of the artists played guitar, either in the traditional Roma style or universal rock and blues. The jams were unending and musical styles and cultures flowed together and combined in truly unexpected ways. It was not unusual for

someone with whom I had never exchanged more than a few words to jam with me for over an hour.

Meals were also an essential aspect of each day. We would all meet at a little restaurant, and exchange ideas about everything. We spoke in many languages, including pantomime, but always with the greatest openness, spontaneity, respect, and caring.

TSS: How many paintings resulted from your experience?

JH: I work at a fevered pitch when placed in an isolated environment free from the distractions of daily life. The collective energy of the group also motivated me a great deal.

TSS: What were your favourite subjects for compositions at Sympa? How did the setting inspire your work?

JH: In Patince, I was drawn to the water. The reflections in the Danube, the plants on its banks, and the distant fields and hills it runs through were a never-ending source of inspiration for me. Being there was like being suspended in time: nothing else to think about, to worry about, or to attend to.

TSS: As a place to work, how does Sympa in Slovakia compare to Nice, France, your current residence? How is the light and mood different or similar, for that matter?

TSS: Where did the other artists come from?

TSS: How many were Slovak?

JH: The first year I attended, there were two or three. This time there were a few more, perhaps six or seven.

TSS: What are Slovakia's artistic prospects for the future? Are there any Slovak artists whom you admire?

JH: Slovakia has a strong artistic tradition. All the painters I met were hardworking, serious, and accomplished. They are powerful and passionate. I was very close with several Slovak artists and had some kind of interaction with everyone at the seminar. It is an intimate situation. There were many whom I admired not only for their painting but also for their musical ability and knowledge of history and culture. I don't want to make too great a distinction between Slovak painters as opposed to Hungarian painters living in Slovakia or Slovenian painters, etc. The obvious thing about the international seminar is how similar we all are. The differences, in that context, are hardly noticeable.

TSS: How attractive is Slovakia for artists? Will the next Picasso choose to live in Slovakia as opposed to more traditional artist haunts, such as France, Spain, or Italy?

JH: The next Picasso is not likely to choose Slovakia. Artists are drawn to a place where there is a lot of money combined with a strong interest in the arts. The interest exists in Slovakia but the collectors are not there as far as I can see.

TSS: How has your experience in Slovakia influenced your work?

JH: It is hard to say. It has certainly had a dramatic affect on my view of the world. It was a great privilege to meet the artists from Iran, to hear about their daily lives, and to discover how very much alike we are in our hopes and dreams. It was moving beyond words to sit up late at night with two Slovenians as they described battles that occurred near their homes during the recent war in the Balkans. The retreat, overall, not only changed my art but my life.

Note: An exhibition of Jeffrey Hessing's work, including paintings of Slovakia, will be shown at the Pucker Gallery in Boston, Massachusetts, from March 18 to April 16, 2006. For more information, see www.puckergallery.com.