PRIME Minister Mikuláš Dzurinda returned virtually empty-handed from his first official trip to the White House on March 14. His visit brought no US concession on the most important issue in bilateral relations for Slovakia - the US visa requirement - but offered the Slovak leader a chance to again highlight the friendly relations between the two countries, and squeeze some electoral capital out of being photographed with President George W Bush. 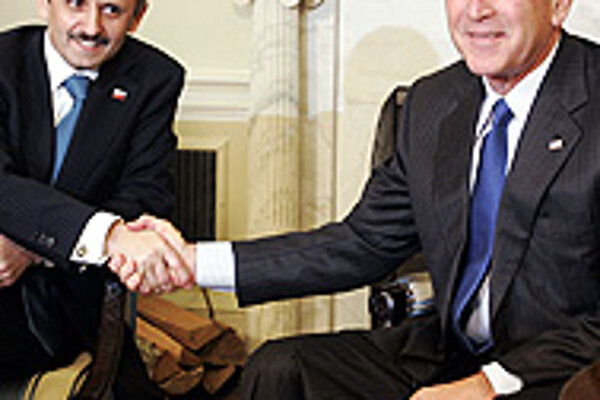 Font size:A-|A+  Comments disabled
PRIME Minister Mikuláš Dzurinda returned virtually empty-handed from his first official trip to the White House on March 14. His visit brought no US concession on the most important issue in bilateral relations for Slovakia - the US visa requirement - but offered the Slovak leader a chance to again highlight the friendly relations between the two countries, and squeeze some electoral capital out of being photographed with President George W Bush.

"The US is the main economic, political, and military power in the world, and is one of the world's guarantors of global order and peace. Visits by the representatives of small allied states to the White House are an expression of the political will of both states to cooperate, and demonstrate this cooperation to the world," said Ivo Samson, a senior researcher with the Slovak Foreign Policy Association (SFPA) think tank.

"The accompanying compli-ments are part and parcel of good relations and what could be called 'diplomatic hygiene'," he told The Slovak Spectator.

Before his trip to the US, Dzurinda did not conceal the fact that the visa requirement was one of the main issues that he wanted to discuss with Bush.

"We not only have to trade goods and exchange political views, but we also need to bring Slovaks and Americans closer together. That's why it's natural that the leaders of countries - and not only Slovakia - are opening up this [visa] issue. On the other hand, we should be realistic and patient. We should approach the issue step by step," Dzurinda said in Washington on March 13.

That gradual progress is being made was confirmed by an agreement between the two states to prolong the duration of work visas to the United States from the current 12 months to 3 years.

"I believe there's a willingness to continue with step-by-step policies until we reach the final goal - a complete cancellation of the US visas," said the Slovak leader.

Dzurinda, who also met with the chairman of Senate Foreign Relations Committee, Richard Lugar, said after returning from his trip that Lugar was a strong supporter of scrapping the visas, but that the issue was a "live and sensitive one" for Congress.

Samson said it was disappointing that no progress was achieved on the visa issue.

"Slovakia considers the US to be its main foreign policy partner as well as a key partner on national security policy. Slovak citizens do not represent such security threats for the US as, for instance, France or Great Britain, where terrorists holding French or British passports are active.

"In this sense the continuing visa duty without a pledge from the US to start working on cancelling them is a certain disappointment for Slovaks.

"The US is probably taking into account the economic side of the issue in this case, which, again, many Slovaks will not understand, given the huge illegal migration to the US from Latin America," Samson said.

According to US Ambassador to Slovakia Rodolphe Vallee, however, Slovaks have no reason to be disappointed over the visa issue.

During his visit to the White House, Dzurinda also reaffirmed Slovakia's support for the US and its international policies.

"We will always be on the side of spreading freedom, democracy and stability. This is the foreign policy of Slovakia," Dzurinda said.

US Ambassador to Slovakia Rodolphe Vallee discussed the recent visit of Slovak Prime Minister Mikuláš Dzurinda to the White House in a brief interview on March 15.

The Slovak Spectator (TSS): How does the US look at the recent visit of the Slovak leader to the White House?

Rodolphe Vallee (RV):The prime minister's trip reaffirmed the close partnership between our countries in a very productive get-together, particularly on our common agenda of advancing freedom and democracy.

TSS: Do Slovakia and the US plan any specific cooperation as a result of the recent visit?

RV: Accelerating the pace of cooperation, additional technology-based US foreign direct investment, and exchanges were specifically targeted. We are currently finalizing the text of a bilateral science and technology agreement, which facilitates the exchange of S&T resources and information. The president specifically charged us to ramp up additional ways to encourage student exchanges.

TSS: No concrete progress was achieved on the visa issue. Should Slovaks be disappointed?

RV: No, they should not be disappointed. The president listened very carefully and appreciated the prime minister's thoughts on this issue.

There has been big progress on making the visa process friendlier, which the president specifically directed us to focus on, and we will.

New initiatives on extending reciprocity schedules are very important. Slovakia's economic progress will continue to improve the visa refusal rates. Both leaders expressed their commitment to making progress on the visa roadmap, and we expect this progress to continue. This issue involves a number of countries, not just Slovakia.