WHATEVER British Prime Minister Tony Blair and US President George W Bush expected from their recent meetings with top Slovak officials, cartoons ridiculing Alexander Lukashenko, the autocratic president of Belarus who has been called "the last dictator in Europe", probably didn't figure high on the list.
But thanks to Béla Bugár, the acting speaker of the Slovak parliament, two of the world's most powerful leaders are now the proud owners of the animated work of Martin "Shooty" Šútovec, a cartoonist for the Slovak daily SME. 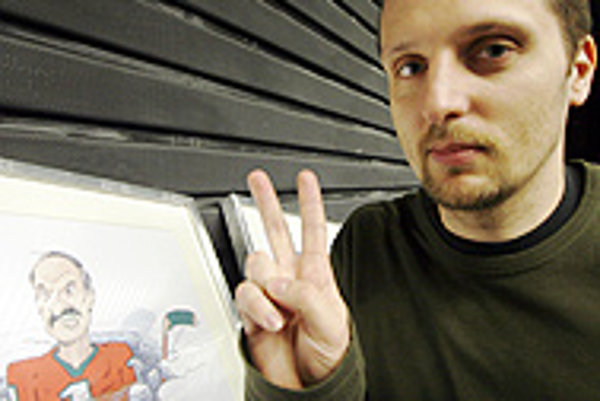 Font size:A-|A+  Comments disabled
WHATEVER British Prime Minister Tony Blair and US President George W Bush expected from their recent meetings with top Slovak officials, cartoons ridiculing Alexander Lukashenko, the autocratic president of Belarus who has been called "the last dictator in Europe", probably didn't figure high on the list.

But thanks to Béla Bugár, the acting speaker of the Slovak parliament, two of the world's most powerful leaders are now the proud owners of the animated work of Martin "Shooty" Šútovec, a cartoonist for the Slovak daily SME.

Bugár bought the drawings, featuring a glaring Lukashenko in a hockey uniform having fallen through the ice, at an auction organised by the Pontis Foundation NGO on March 10.

"It would be great if the representatives of these two influential states had these cartoons in front of their eyes practically every day," Bugár told The Slovak Spectator.

Blair visited Slovakia for the first time on March 9-10, while Bugár was part of a Slovak delegation that visited Washington and George Bush on March 13.

Bugár, the leader of the governmental Hungarian Coalition Party, said that Blair had laughed at the cartoon and appeared to be surprised. With presidential elections scheduled in Belarus for March 19, Blair said he hoped it would be the last chance to immortalize the dictator.

On the other hand, Bush told Bugár that each president opens a library at the end of his last term in office, and that he had thought of opening a centre for emerging democracies, where he could hang the Shooty drawing.

The cartoon gifts were apparently inspired by the controversy stirred recently by the publication in Denmark and France of caricatures of the prophet Mohamed, and to the belief in the West that such cartoons are an important expression of free speech.

But the drawings also served to underline Slovakia's foreign policy priorities, which since the country's EU and NATO entry in 2004 have increasingly focused on less mature democracies in the region, including Belarus, Ukraine and the Balkans.

The Pontis Foundation, a Slovak NGO, raised around Sk85,000 (€2,350) from its auction of the work of cartoonists from four Central European newspapers, including Slovakia's SME daily. The money will be sent to Belarus to support Pavel Morozov, a political cartoonest who is currently facing a five-year prison sentence for allegedly offending Lukashenko.

Slovak Prime Minister Mikuláš Dzurinda called the Belarus elections that country's "first but uncertain step towards democracy", while Bugár said he wanted to raise awareness and support for Belarus' fate by purchasing the cartoons.

Pontis has been cooperating with the Belarus civil society, including Morozov, as part of its assistance programme.

"The auction was another step in our efforts to show solidarity with the Belarus cartoonists and Belarus civil society, who are under attack because they hold opinions that differ from the official line," said Pontis programme manager Balázs Jarábik.

According to Jarábik, caricature is the ideal tool for "demystifying" Lukashenko and encouraging different views of his politics.

"They show Belarus people what Europeans think of their president and of the situation they are in," Jarábik said.

According to the Slovak Foreign Ministry, Slovakia is closely following political developments in Belarus, a country that violates the basic human rights of its citizens and ignores international democratic standards.

"We consider the steps of the Belarus regime against Third Way [activists who published Morozov's cartoons on their website - ed. note] as a restriction on the freedom of expression, and one that is characteristic of the country's domestic political situation," Foreign Ministry spokesman Juraj Tomaga told The Slovak Spectator.

AS BELARUS headed toward elections on March 19, with opposition rallies ending in arrests and democratic leaders and other regime opponents beaten and detained, a Slovak NGO continued its assistance to raise awareness for Belarus' civil society.

"It's clear that [Belarus President Alexander] Lukashenko's main focus is not campaigning for re-election but reducing appetite for protest in the country," said Balázs Jarábik, programme manager of the Pontis Foundation.

Pontis is the most active Slovak NGO in Belarus, and has been present in the country since 2000 when it helped youth organizations and NGOs organize get-out-the-vote campaigns for 2001 presidential elections. In 2004 Pontis launched the Slovakia-Belarus Task Force, a group of Belarus and Slovak civil society leaders. It runs exchange visits for Belarus experts to Slovakia and Brussels, organizes NGO conferences, and commissions surveys and analysis on the Belarus political and economic scene.

Pontis' activities in Belarus naturally caught the eye of the infamous State Security Committee (KGB). "We, as well as other NGOs working inside of Belarus, have regularly been followed, and I was harassed at the Lithuanian-Belarus border during my last visit in 2005, when KGB officers confiscated my computer," Jarábik said.

In view of the oppression and intimidation that accompanied the run-up to the Belarus elections, Slovak Prime Minister Mikuláš Dzurinda said: "We doubt that the upcoming vote will be free or fair."

According to Jarábik, Lukashenko is preparing for another "elegant victory", and leaving nothing to chance.

"The leaders of independent monitoring organizations were 'preventively' arrested a few weeks ago and accused of slandering the president. Opposition representatives have not been appointed to election commissions, and exit polls must be 'cleared' by the Science Academy, which is loyal to Lukashenko," he said.

In the four months since his selection as the single candidate of the united democratic opposition in Belarus, Alexander Milinkevich has developed a genuine alternative movement within the country that is also recognised abroad.

Jarábik said that it's very hard to predict what will happen on March 19. "Milinkevich attracts thousands of supporters every day wherever he goes, makes the regime very nervous about post-elections protest."

Even if democratic forces will be overwhelmed after March 19 the viable alternative had at least emerged. "These elections might be the first step towards regime change," Jarábik concluded.