GDP data even better than forecast

THE GDP story just keeps getting better. After the Statistics Bureau delighted markets last month with an estimate of 7.5 percent GDP growth for 4Q 2005, one of the highest rates Slovakia has ever seen, the actual results released in early March were even better at 7.6 percent. 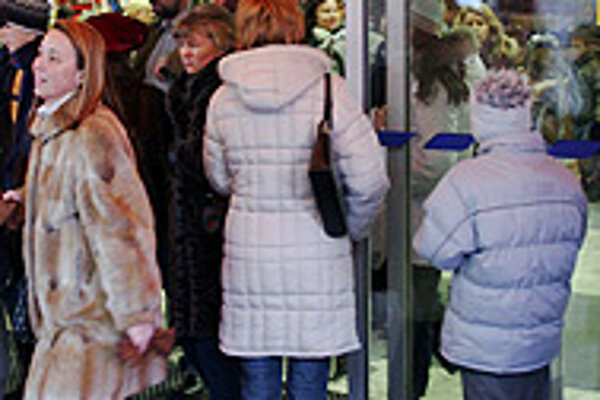 Font size:A-|A+  Comments disabled
THE GDP story just keeps getting better. After the Statistics Bureau delighted markets last month with an estimate of 7.5 percent GDP growth for 4Q 2005, one of the highest rates Slovakia has ever seen, the actual results released in early March were even better at 7.6 percent.

Finance Minister Ivan Mikloš said the country's surging economy is increasing confidence in the country's chance of catch up with EU economic averages, especially the crucial average standard of living indicator, within 15 years.

According to Mikloš, Slovakia's economic growth, which reached its highest level since 1996, is sustainable because it is supported by investments.

Domestic consumption was the main driver behind the economic growth. The consumption of Slovak households increased by 5.9 percent thanks to strong growth in real wages and the availability of cheaper credit. However, public sector consumption also rose by 3.8 percent year-on-year.

In terms of GDP creation, the largest increase was recorded in the construction sector (by 18.9 percent), followed by industry (14.3 percent), retail (9.8 percent), hotel and restaurant services (7.3 percent), agriculture (6.1 percent) and other social services (5.2 percent).

Analysts agree that the economic growth is built on much firmer foundations than it was a decade ago, when public spending fuelled massive economic growth but eventually led to an economic meltdown in 1998.

According to Šmál, Slovakia's GDP is today being driven by final household consumption and the creation of gross fixed capital, with a much lower public sector contribution.

"Investments are important, because they are the basis for future economic growth, as are nominal and real wages," Šmál added.

However, Slovakia is no longer the region's only economic poster child after the Czech Republic posted similarly positive results of 6 percent GDP growth for 2005. While the two countries are starting to outperform regional neighbours Poland (3.2 percent GDP growth in 2005) and Hungary (4.1 percent), they still have some work to do to catch up with the Baltics, especially Estonia and Latvia, which posted GDP growth of around 10 percent last year.

According to ING Bank analyst Ján Tóth, the Czech economy was propelled last year by foreign trade and growing exports, while in Slovakia investments were the main economic driver.

The Statistics Bureau predicts that Slovakia's GDP will grow by 6.2 percent year-on-year for the first half of 2006 to Sk756.5 billion (€20.19 billion). The Bureau expects inflation of 4.3 percent during the same period.

While the GDP results remain only numbers for the general public, and the majority of Slovaks remain pessimistic about their standard of living, the Statistics Bureau claims that citizens saw their economic situations improve at the fastest rate in eight years.

While salaries grew throughout the economy, there are still huge and widening differences between wages in the banking and telecom sectors, for example, and those in public sector branches like health care and education.

For October-December 2005, the Statistics Bureau reported the highest average monthly salary in the financial services sector, at Sk33,716, compared to Sk14,763 in agriculture and Sk14,876 in social services.

The development of wages also showed regional disparities, with the Bratislava region the only area of the country to record a wage average above the national mean. Prešov remains the lowest-earning region.

Šmál said it was natural that Bratislava had the highest and fastest growing wages, since financial institutions tend to congregate in capital cities. On the other hand, the agricultural Prešov region naturally had lower wages given its preponderance of farmers.

These differences were natural and could only be reduced by artificial state intervention, he said.

"These differences can be reduced to a certain extent, but it's not possible to bring all the regions to the same level. It's not possible to cover the whole country with cement and build factories everywhere. There always have been and always will be differences, due not only to history but also to natural preconditions," the analyst said.

The Statistics Bureau warned that growth in real salaries was outpacing the rise in labour productivity, and that it was not accompanied by an equally strong increase in employment.

Slovakia's unemployment rate, measured as the total number of people out of work, dropped to 15.3 percent in the fourth quarter of 2005, the lowest level since the first quarter of 1999. The unemployment rate for the whole of 2005, meanwhile, fell by 1.9 percentage points year-on-year to 16.2 percent.