SLOVAKIA only had a few weeks to bask in its glowing economic growth figures for 2005 before receiving a cold shower in the form of ominous preliminary foreign trade results for January 2006. 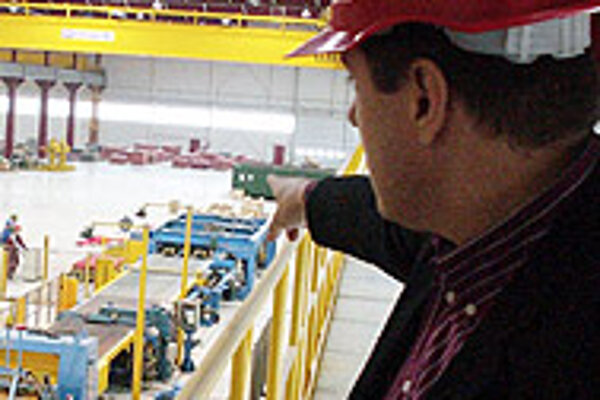 Font size:A-|A+0
SLOVAKIA only had a few weeks to bask in its glowing economic growth figures for 2005 before receiving a cold shower in the form of ominous preliminary foreign trade results for January 2006.

The December 2005 foreign trade results had not been pretty either, with the monthly trade deficit jumping to over Sk26 billion (€700 million), and driving the annual deficit up to Sk76 billion (€2.02 billion), or around 5 percent of GDP.

But the bad news continued in January with a surprising Sk11.2 billion (€298 million) deficit, up Sk9.4 billion from the same month a year ago.

High trade deficits can put downward pressure on the currency. With Slovakia recently having joined the ERM II mechanism ahead of euro adoption in 2009, and linked the crown to a central parity rate within a 15 percent fluctuation band, pressure for currency stability has increased.

So far, in the absence of detailed data on the January results, market analysts admit to being surprised by the numbers, but say that while the country can expect more of the same, the high deficits do not indicate any deeper sickness in the Slovak economy.

Exports are still growing strongly, at 23 percent in January, while the 36 percent rise in imports was likely due to one-off technology imports connected to major foreign investments, said Zdenko Štefanides, the chief economist for the VÚB bank.

"Unfortunately, the trade data for January are only preliminary, and contain no details beside the headline volumes of export and import flows, so it's impossible to say why imports were 36 percent higher than the year before. At this stage we can only guess that imports were boosted by one-off imports of goods for automotive manufacturers building plants in Slovakia, such as the import of two major press machines for the KIA plant at the end of the year," Štefanides told The Slovak Spectator.

"In January, exports were 23 percent higher than a year ago, continuing from 20 percent annualized growth in December and 11.5 percent growth for the whole 2005. We are seeing a recovery in export growth and its possible acceleration once the new car plants and other FDI-backed export-oriented factories come on line. This should be the driving force in foreign trade developments in the latter part of this year and beyond," he said.

According to the analyst, imports may be swelled by FDI-linked imports and high energy prices for some time to come, but eventually the tide will turn and export growth will overtake imports once again.

"We are expecting the trade deficit to narrow this year compared to 2005," Štefanides concluded.

Poštová banka analyst Miroslav Šmál agreed that while the trade results looked bad, once the structure of trade was examined, the numbers appeared in a better light.

"The trade deficit is being generated not only by household consumption but also by imports of investment-related goods," Šmál told The Slovak Spectator.

The analyst noted that the value and volume of imports of energy raw materials such as oil and natural gas have also increased.

"On the one hand consumption of these materials has been increasing, and on the other hand their prices on world markets have been rising, which doubles the impact on the trade balance," Šmál said.

Štefanides noted that in 2005, two thirds of the increase in the trade deficit was due simply to costlier imports of oil, gas, and other commodities

"The mineral commodity gap widened [by Sk17 billion] from Sk69 billion in 2004 to Sk86 billion in 2005, while the overall trade deficit rose [by Sk26 billion] from Sk50 to Sk76 billion. The rest of the 2005 trade deficit increase [Sk9 billion] was due to a reduction in the surplus generated by the trade in vehicles, due to production cuts at the VW Slovakia factory due to their plant refit to introduce a new Audi model, and wider deficits in the optical, medical, and measuring devices categories," Štefanides said.

Ľudová banka analyst Mário Blaščák saw a risk in the Slovak economy's high concentration on a few sectors, such as the auto industry, and said the foreign trade results reflected the negative impact of high energy prices on a small and open economy.

ČSOB analyst Marek Gábriš also said he believed that Slovak exporters were performing well despite the increased trade deficit. Exports are now growing at their fastest rate since April 2004, and have been over 20 percent higher year-on-year for three months in a row.

Over the year, exports to EU-member states rose by 11.8 percent to make up 85.4 percent of Slovakia's total exports.