WHAT do getting mauled by a bear and dying in a car accident have in common? Like all tragedies, both have consequences that can either put lives on hold or grant the wisdom necessary to continue living.
An Unfinished Life (Žiť po svojom)
Starring: Robert Redford, Morgan Freeman, Jennifer Lopez, Becca Gardner
Directed by: Lasse Hallström
Running time: 107 minutes
Rating: 7 of 10 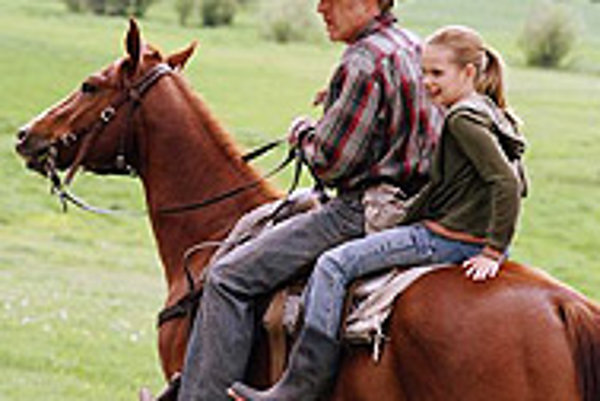 WHAT do getting mauled by a bear and dying in a car accident have in common? Like all tragedies, both have consequences that can either put lives on hold or grant the wisdom necessary to continue living.

In An Unfinished Life, Einar Gilkyson (Robert Redford) stopped living the day his son, Griff, was killed in a car accident. He vents his immeasurable pain at Jean (Jennifer Lopez), his son's wife, who was driving the car that night, and cuts her out of his life. The problems start a dozen years later, when Jean runs away from her abusive boyfriend, Gary (Damian Lewis), and, with nowhere to go, lands at Einar's doorstep in Wyoming. He refuses to take her in until he sees the surprise she's brought with her - a granddaughter named Griff (Becca Gardner).

At this point, the movie was a good concept that had some potential for genuine emotional drama, but clumsy dialogue quickly turned it heavy handed. In one scene, Jean shows little regret for breaking a dish at Einar's house. "It's just a dish," she comments. "Just a dish?!" Einar roars. "Some things just aren't replaceable!" Besides being a lame attempt at subtlety, the scene was utterly redundant, since we had already been shown that Einar blamed Jean for his son's death.

The core of the film is expressed through Einar's former rancher, Mitch (Morgan Freeman). Mitch became an invalid after being mauled by a bear a while back, something Einar witnessed but was too drunk to do anything about. Therefore, Mitch holds some power over Einar, which he wields to teach him forgiveness. When the bear that attacked him is put in a shelter, Mitch asks Einar to check on him, feed him, and, eventually, set him free.

Einar recruits Griff's help for the task, who causes an accident that leaves Einar with a couple of broken ribs. This time, though, he learns to forgive. "They call 'em accidents cause it's nobody's fault," Mitch reminds us.

The film's most convincing scenes came from the film's youngest cast member, Griff. Her innocent, yet precocious style is delivered with an authenticity that eludes most young actors. Her presence on the screen, and in the screenplay, is what keeps the adult characters interacting.

In the end, the film's goal remains a lofty one. If we had just a little more forgiveness in the world, we'd all live a lot more.